October 12, 2007
I'm currently re-reading Mary Shelley's Frankenstein. It's a ritual a take part in during the month of October every five years or so. How it started, I couldn't tell you, but I guess that's the beautiful thing about rituals...they don't need to mean anything or originate out of any particular need. As with all my literary habits, I read in bed before going to sleep.

I was reading the part where Victor Frankenstein is sitting in a cave listening to his creation relate what has happened since he was first created. The monster (for lack of a proper name, though I personally do not believe him to be that much of a monster, per se), was sitting in a make-shift hovel attached to a poor farmhouse. He talked about how over time he gradually began to decipher the meaning of language used by the farmhouse's inhabitants (a blind old man and his two children, male and female). By listening and intuiting what was going on, he too began to understand basic words like milk and fire. He continued:

"I learned also the names of the cottagers themselves. The youth and his companion had each of them several names, but the old man had only one, which was 'father.' the girl was called 'sister' and 'Agatha,' and the youth 'Felix,' 'brother,' or 'son.' I cannot describe the delight I felt when I learned the ideas appropriated to each of these sounds and was able to pronounce them."

As I lay in bed thinking about this, for what better time to spin ones wheels on abstract thought than as one lays in bed trying to go to sleep, I was struck at how difficult such an apprehension of concept must be.

A few years back, I taught English as a Foreign Language to adults from other countries. Due to the variety of countries of origin that my pupils claimed, and my own general ignorance of fluency in other languages (aside from my scattered, but useless international vocabulary and dusty, anemic understanding of the Spanish language), the school had a philosophy of language acquisition which did not rely on translation. Rather, language was to be internalized and adapted to as a child learns through concrete representation (at least as a foundation in the language).

What this means is that instead of standing in front of a classroom of, let's say, Spanish-speaking adults and saying, 'Shirt is camisa,' I would hold up a shirt (or a picture of a shirt) and say, "This is a shirt." Having the actual physical object allowed the students to assign their own understanding of what a shirt is to the item, and the classwork revolved around them understanding to name that item with the word 'shirt.'

Got it? No? Well, as with most things in my life, the explanation is far less simple than the action.

With that in mind, let me steer us back to Frankenstein's creation and his gradual understanding of various words he observed the cottagers use. How the hell did he get the concept behind 'sister'?

So as I lay in bed, needing sleep but unable to shut turn off the industrial blender of my brain, I started to muse on how I came to understand the concept of the word 'sister.' Certainly I was able to say the word long before I had an internalized sense of what it really meant.

However, I never had a sister. I have two brothers. My mother was an only child, and while my dad had a sister, we did not interact with that side of the family much as I was raised. Come to think of it, I can't really think of any of my friends, growing up, who had sisters. I knew girls. But I don't see how I could take the leap of understanding from a child of the female sex to the concept of a sibling relationship with someone of that gender.

I understand 'brother.' I have two of them. I am one. I get that sense of competition and mutual respect. I understand the jealousy and the petty rivalry. I understand the compassion and the support. I get the feeling that here is someone who you'd do anything for, regardless of how they mistreated you or vice versa. I have beaten up and been beaten up by the other male off-springs of my parents. I have won and lost games with and against my brothers. I have refused to play nice and wondered why they didn't like that. I have split a bag of chips, a can of soda, and life's lessons with these two guys. I have secreted away candy, toys, and shame so that I didn't have to share with them.

In all, I have experienced just about every amazing aspect of life and love with the two men I call my brothers.

Through their examples, I was able to develop a more generalized understanding of the concept of brother that I could apply to other people in my life. I could be a brother and have a brother in other men in my life.

Simultaneously, our parents didn't raise us with this grand sense of the Battle of the Sexes. Gender roles were non-existent. At various times, each of my parents stayed at home while the other went off to be the bread-winner. I don't remember once hearing either mom or dad say to my brothers and me, "Boys don't...," "Only girls do ...." and so on. We learned to do laundry as much as we did to mow the lawn. We could play basketball or My Little Pony as we wished. We could go to either parent for the same love, understanding or advice.

I suddenly could see that the way I got to the idea of 'sister' was plain. There was no difference. So the name and the gender changed, but the abstract concepts remained the same. Brother and sister are pretty interchangeable concepts.

I just recently got home from visiting my two brothers for their birthdays (they both live in Illinois and have their birthdays two days apart). What a gift to be welcomed into their lives and be able to fly across the country to spend that time with them. I have come to consider my older brother's wife the sister I didn't have growing up. Again, I could attach the same love and respect, resentment and possessiveness, the same sense of commonality and friendliness I had with my brothers.

Leaning back in bed, I smiled. I figured it out. Much like Frankenstein's creation, I killed a few hours of sleep, as the original monster did a few villagers and sheep.

This monster was also able to experience the delight in learning the meanings of words he heard. I was more blessed, though. I got experience the words 'brother' and 'sister' in my way and reap the benefits of such an amazingly complex human relationship (with all its ups and downs).

Content with figuring out how this Frankenstein monster reached his understanding of abstract ideas with little immediate concrete representation, I was thankful for the parents I have who knew better than to teach us that men and women aren't the same, for the two brothers I grew up with, and the sister who later entered my life. I spent a moment in appreciation for the grander scope of the words brother and sister in my day to day life.

Thus it was that I finally drifted off to contented sleep. 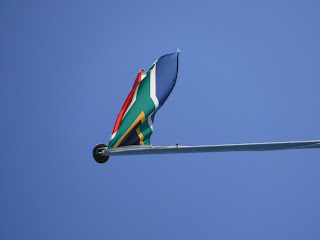 I have been back in the United States for a while. The culture shock and jet lag slowly wear off. The shapes of outlets do not look so oddly foreign anymore. Driving on the right side of the road requires less conscious attention. People sound less blatantly American (and my accent returns to "normal"). The general absence of butternut squash and peri-peri sauce is less glaring, and avocado is rarely abbreviated to "avo."

Following the final weeks of cold in Cape Town, the absurd heat of the desert in the summer feels good on my thawing limbs.

I have been trying to close out my ponderings on my time abroad, I wanted to pull together some notes about life in South Africa and the study abroad experience at the University of Cape Town for prospective future students. At the same time, I have been finding it incredibly difficult to just finish this entry. It has been in a slowly growing draft-form for close to two months. Perhaps I do not want to "End" my jo…