Collage Art - A broader narrative for the New World, and the storm before the drought

May 30, 2020
Typically, I make collage pieces without a plan. Rather, I let the available images I am cutting come together in the moment. As a result, most of my pieces tend be rather surreal. They often lack specific themes (though I may interpret the result after completion) or image structure. Beyond a gut feeling as to the aesthetic of the disparate images in juxtaposition, I feel I have little directorial role in the outcomes. In that sense, my collages are rather process-oriented.

One year, the Beatnik Lounge and Gallery (in Joshua Tree) was holding a Thanksgiving show, and I wanted to create a special piece for the event. Many of the shows there challenged me to consider the title or theme's deeper implications. I had been considering the "traditional" (you know) images of the first Thanksgiving and the overly reverent, Hallmark-style white-washed nostalgia that always attends such classical American traditions. While I am not a particular advocate of wholesale dismissal of beloved cultural symbols, they often provide only a limited view or narrative. There is always more than one way of looking at things.

The U.S. Capitol Rotunda bears a classic piece of American art (as in, before we produced any decent art, in my opinion) commemorating the landing of Columbus in the near world. It was painted by John Vanderlyn. The painting clearly seeks to portray the European Age of Exploration and embedded ideas best suited to promote the nascent Republic and its Manifest Destiny. A crowd of prayerful and celebratory white men make landfall on a wild shore. It is meant to show a Terra Nullius despite the lurking indigenous presence. Natives are squeezed to the background, cowering and worshipful at the edges of the forest. It is a motif that has existed in multiple forms. For reference, the original painting is at the bottom of this post. It was originally positioned here, but I do not want to give it pride of place.

For this show, I wanted to a produce a response to it that incorporated the similar layout and impression while rebutting and broadening the original historical perspective. If this is to be a symbol of America, I wanted it to incorporate a more beautifully varied and often contradictory collection of narratives. All the better to represent and celebrate the diversity that makes up the sort of America I feel is worth celebrating.

As a piece of work, this was a major departure for me. I uncharacteristically approached this with an outline of the layout. While the individual component parts were serendipitously culled from the print materials I had ready access to (Smithsonian and National Geographic magazines, issues of Time and AAA monthly, brochures and travel periodicals from thrift stores...), they would all be fitting into a larger pictorial that would match the original painting. Furthermore, I was working at a scale I had never before attempted. Most of my collage works ranged in size anywhere from that of a postcard to a legal sized sheet of paper. The finished piece, shown below is about four feet in length. It consists of over 100 individual images and pieces of paper that were cut, arranged, overlaid, and glued together by hand.

As I have been writing this, I realize is far better articulated by Terese Marie Mailhot, "the truth of my life as an Indian woman has asked that I hold many things: white histories and my people's and other nation's stories, passed on and unwritten but still living. As an indigenous person, in order to find the true history of other indigenous nations, I must remind myself that history doesn't exist in a linear progression; it's duplicitous and not always found in books. So much has been erased, and too much still has to be uncovered."

An obvious title presented itself as I completed the piece: "E Pluribus Unum." Out of Many, One. The America I want to call home is home to many like and unalike. It is a diverse place, and big enough to handle and embrace many different people and stories. A messy work in progress.


It is not a great photo. Difficult to get it without a light source washing out some portion of the image. And way to big for me to scan.

That show was in November of 2016. While the celebration this art was meant to embody was sucker punched, it was ever so needed. 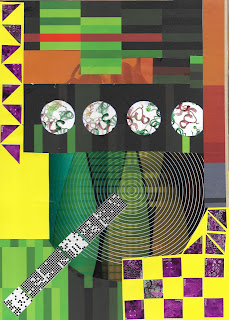