November 03, 2004
It all happened so quickly. It's hard to remember the details.

Oh cruel fate! Once velocity is finally achieved, a decent pace maintained. Why then, must I so horribly be confronted with gravity and the ground?

Matthew and Charles, finding the weather to be lovely for the first time in weeks through the summer, decide to bike downtown to meet some friends. It's unfortunate that that same Sunday morning, Chicago's Annual Air and Water Show is playing to a packed lakefront. Many people. Difficult going on the bikes. Lots of nuisance. Judgements fly about the nature of our society and using machines of war for entertainment purposes. Guns don't kill people. Wars do!

We reached downtown in surprisingly good time. We had a lovely time with friends. Had a great lunch. La la la.

Once again, I forget that an Air and Water show is going on. How? It was just a couple hours previously that we waded through a water show of people trying to get downtown on our bicycles. All that people talked about at lunch was how they wanted to get down to the lakefront or how they were avoiding it at all costs.

So, when we get back to the lakefront trail for the ride home, you can imagine how surprised I was to find that it was even worse. It was no longer slow going on your bicycle. It was wlking your bicycle. It was so crowded I feel like the cattle must feel in those videos about ranching and slaughtering. Packed together, I know I was adding some tire marks to some achilles tendons. I know I was constantly banging my my shins against the pedals of my bike.

It was ridiculous. Why didn't we take the city streets? Oh right...I'm a moron.

By this point, we're pretty much locked in. The next exit from the lakefront is still a ways away.

Oooooh. It's like hypnosis, with a shiny object passing back and forth in your field of vision. Only it's loud, and you have to crane your neck to track the shiny thingy. As far as I can tell, this is the air show. A jet plane flying back and forth. Big fun.

People always talk up the Blue Angels, like it's the coolest, freshest thing ever. I missed that part of my ride home.

Call me what you will (everyone does), but the only reason I can find interest in an air show is if the jet fighter flying back and forth over our heads starts dropping bombs, or participates in a real dog fight with another American jet. American War Technology Vs. American "Defense" Technology in an air-to-air battle to the death! Cut to commercial.

I do have to plug my cushy ass bike seat for a moment. The people who make HyperPlush bike seats get a big shout-out and kiss. I like to ride, and there's nothing like haveing a big soft wad of foam under my ass to absord the shock of the road for me. I sued to freak out the guys at the camping gear store about how comfy that seat was to ride to work on after a morning of heavy forbidden sex (wink to the censors). Ewwwww. Why did you tell us that?!

Anyways, back to our regularly scheduled trauma...

Finally, the flow of humanity allowed Charles and me to get off the lake front and back to the city surface streets. Blessed be.

At this time, the serenity and love for humantiy I had that morning had managed to run screaming from the thunderous sound of jet airplanes screaming overhead. It was over. I was surly. I was about ready to start running over people, or at least push them into oncoming traffic.

Managing to find open stretches of raod, Charles and I began to peddle torward home. Fairly smooth sailing. We're in the clear. All is wonderful.

Nice weather. Away from the crowds gazing at the pretty shiny objects flashing back and forth in the sky. I'm on my bike. Life is good.

This has been a sign. To make up for the stretch of time where the weather was unbikeable (at least to a wimp like me), the world has given me a stretch of days that are thoroughly meant to be biked through. And I did.

I biked everywhere. I went downtown, came back, stopped off at home, biked to Evanston...it goes on.

And then...after casting the ring back into the fires from whence it came, defeating the enemy, discovering that Darth Vader really is my father, destroying the Death Star, finding the Holy Gail with my dad, and other such trilogy happy endings...

Coming home one evening, I ran into some friends on the street. Not literally. We are still building up to my athletic demise. We stood and chatted for a while. Me, on my way home. Them, on their way home with a box of wine. We won't diverge there.

Goodbyes all the way around, and I hopped back onto my bike to proceed home. I was up on the sidewalk, as the street too narrow and the traffic too harrowing to merge back.

Suddenly, the bike disappears from under me. I go tumbling forward and hit the ground head first, catching the handle bars in my chest. Fortunately, I am a bike geek and was wearing a helmet. Otherwise, I may not be lucid enough to type this fine exposition on the elements and whatnot.

Picking myself up (no sense in drawing any attention to my wipe-out), looking around (in hopes of saving a little bit of face) and gathering my senses, I hear a man laughing. Just up the block, a man is standing outside is "office," shady and at street level, but who am I to judge. He began to tell me how often (especially in the winter) people slip on that metal plate in the streets.

Apparently, although I was still quite dazed and trying to nurse my owwiees on my knees and elbows, I had hit one of those metal plates in the sidewalk that covers electrical wires. He proceeds to babble about wanting to get his grommel kit and etch grooves into it as some sort of public service.

I'm not really paying attention to him, still trying to gather my senses. I proceeded to agree with everything he was sying and started to wlak home.

Only when I got home did I realize that my chest was in excrutiating pain. Well no wonder...the handle bars colliding with my chest had broken a rib!

The end. of the biking season. for now. 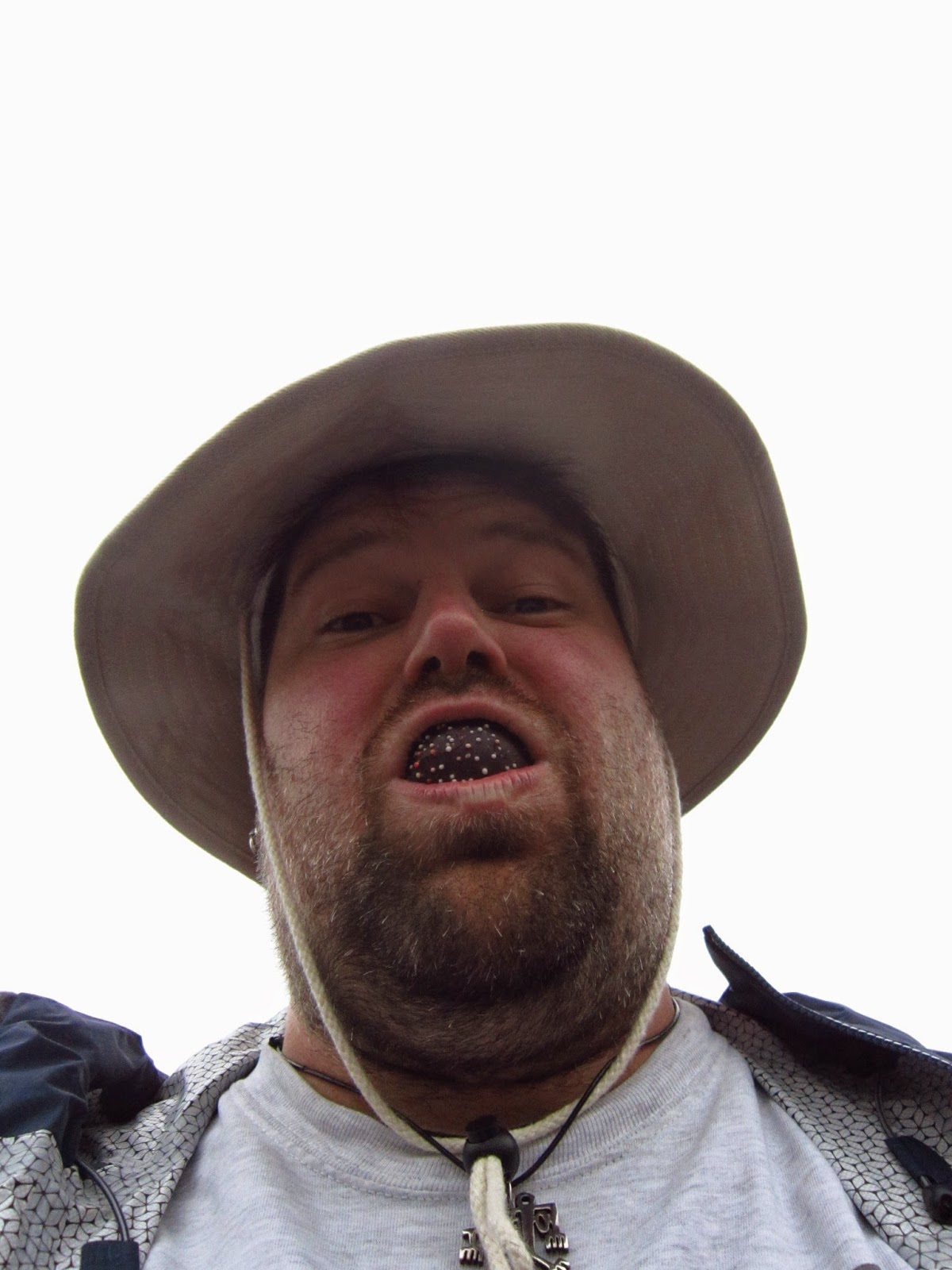 Ugly Selfie of the Week

The latest entry, a lovely little moment involving some sprinkles on a mini-cupcake and a few extra chins... And since I will be out of range for a while, I offer a second glittery little bit of unattractive self-indulgence...