April 20, 2015
Some of you may remember my confusion shortly after arriving in Cape Town about some of the apparent love for Cecil Rhodes. It seemed that despite his legacy as a tyrannical imperialist and capitalist who wanted to tame Southern Africa for white profit and comfort, there was a general acceptance of some level of beneficence from the man. UCT stands on lands donated from his personal estate. He endowed the Rhodes Scholarships. I guess that much of the money for both of these still is coming from the principle in the man's bank accounts (100 years after his death)...he was that rich.


However, he is not that loved, especially in some camps. It apparently took some very creative re-interpretation of Rhodes' will to allow non-white students access to scholarships.

In early March, I returned from one of my tutoring sessions in the township (following an already long day) to find a small gathering of people around the Rhodes statue (positioned at the front end of the upper campus so that just about everyone walks past it on a daily basis). People were in a shouting match with a man in a pink hardhat holding a sign that read "Exhibit white arrogance at UCT." There was an odd smell, which it turns out was human feces that has been thrown onto the statue.

I have to admit that I did not linger. I felt that there certainly was white arrogance and a general lack of race talk (much less than I had been lead to expect) at the university. People were remarkably blind in their privilege. However, my exhaustion was strong enough and the smell was repugnant enough to overpower any curiosity.

Little did I realize that that was the kick-off to a string of protests about colonial symbols, lack of university commitment to post-apartheid transformation, and the general institutional racism in UCT. This would result in continued vandalism/decoration of the Rhodes statue, emotional townhall debates, and an occupation of the administration building on campus. Whiteboards were erected to give students a chance to exchange ideas about the topic. Sadly, some of these sank into use for an exchange of flat out bigoted and intentionally insulting opinions. 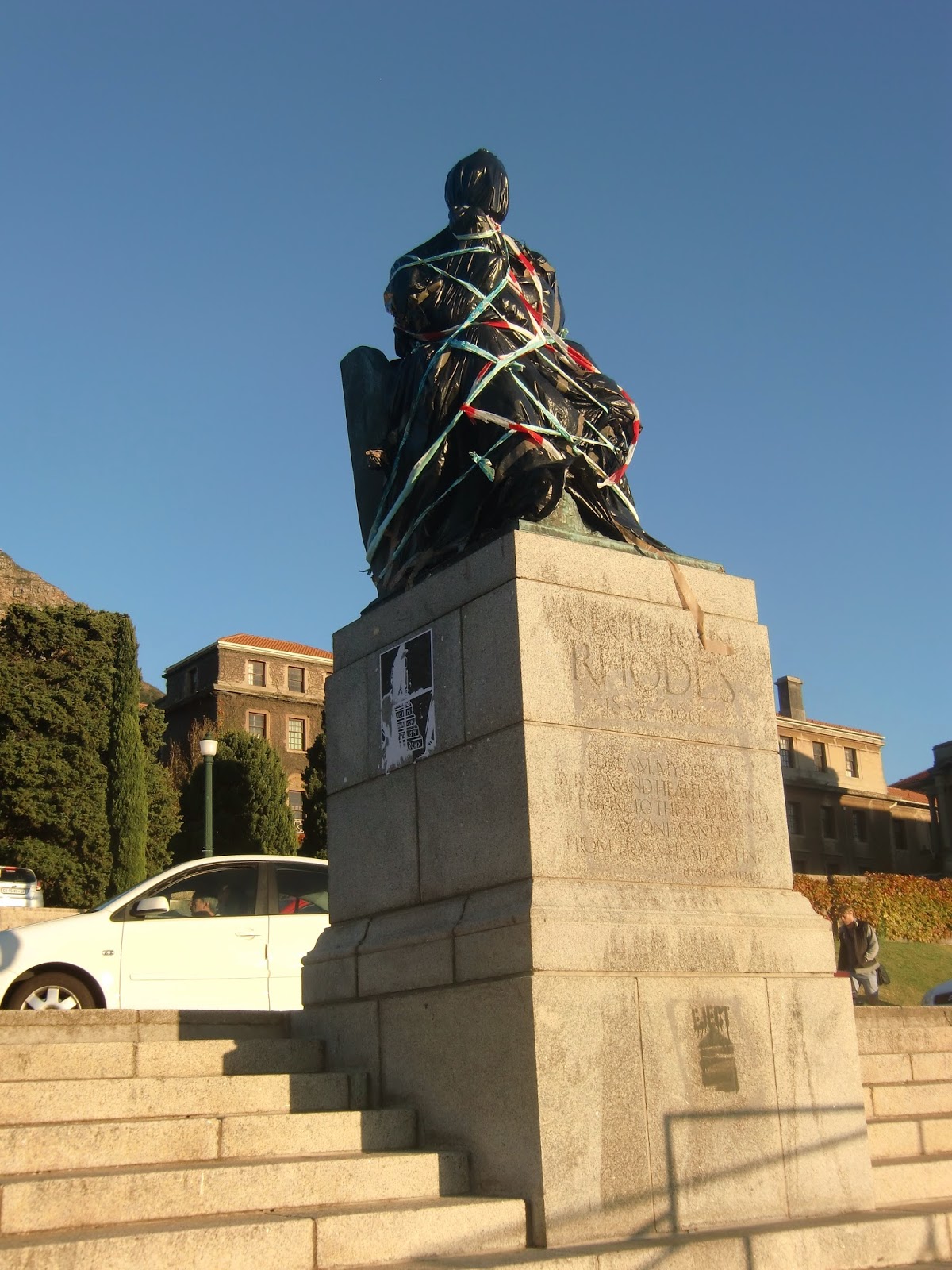 I have met students who run the emotional spectrum from vitriolic anger over the presence of the statue and other reminders of European subjugation of Africa to "complete apathy." There are some who sympathize with the anger toward the statue but feel there are far more pressing symbols of apartheid and colonialism  (just look beyond at the townships in the Cape Flats, where many people were relocation by the Group Areas Act).

A couple weeks ago, the statue was pulled down. While I believe there is a lot of petitioning to do with regards to the national heritage trust regarding the actual fate of the statue, it was important to a significant portion of the student body, faculty, and staff that Rhodes no longer remain in that central and predominant position on the campus.

I gathered with a large number (some reports read hundreds, others thousands) of people to witness this historic moment. Certainly it may not be on the scale of Mandela's first address to South Africa following his release from prison. However, this removal is an amazing success for student activism. The event is also, hopefully, a re-ignition of the transformation post-apartheid that had seemed to stall out years back. While the country had made amazing leaps coming out of those dark years, things had seemed to settle into a position where not a whole lot had really changed. There are still vast levels of inequality and separation here. The only real difference was that it was no longer held in place by specific laws. It was just maintained socioeconomically. 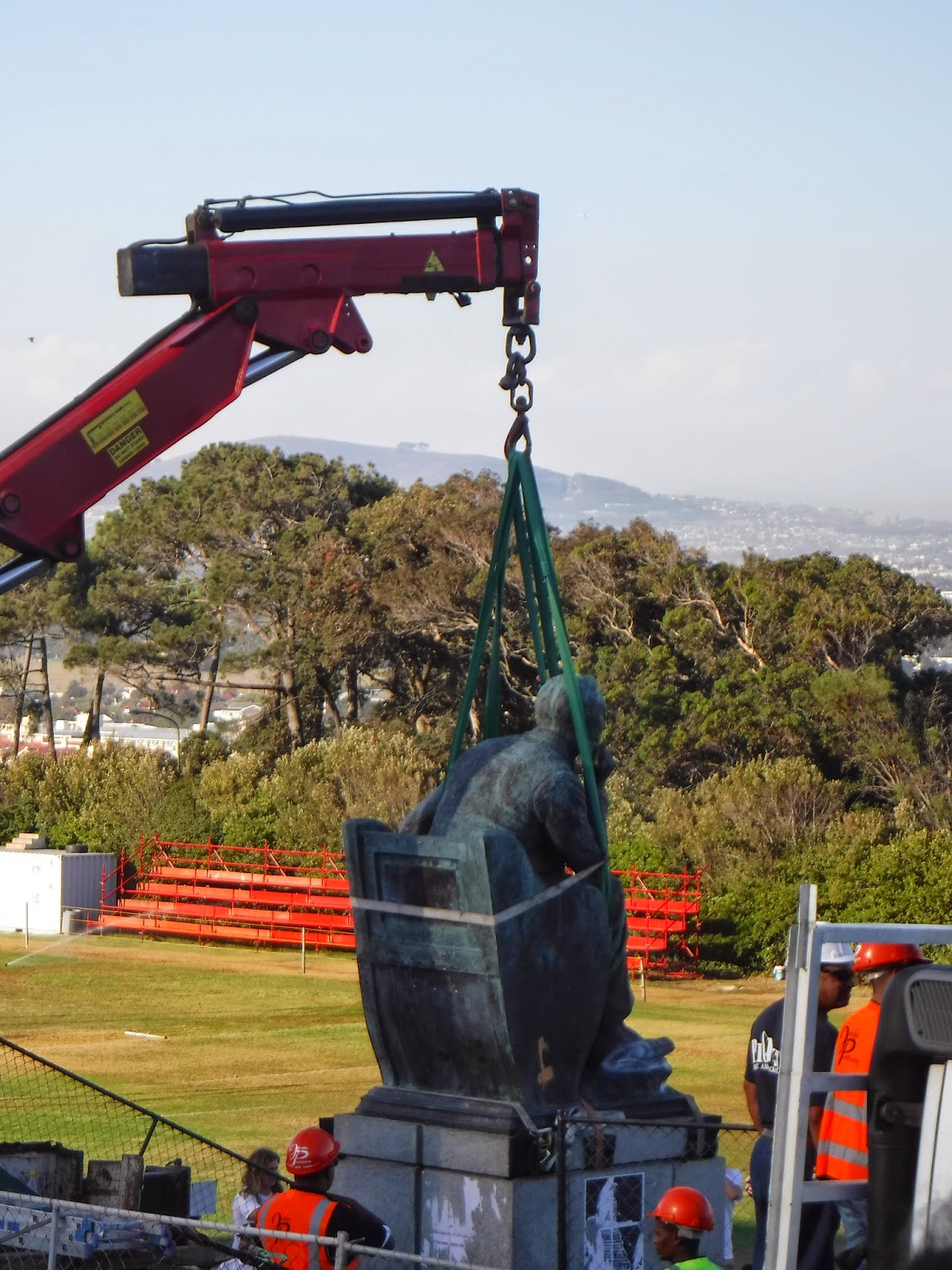 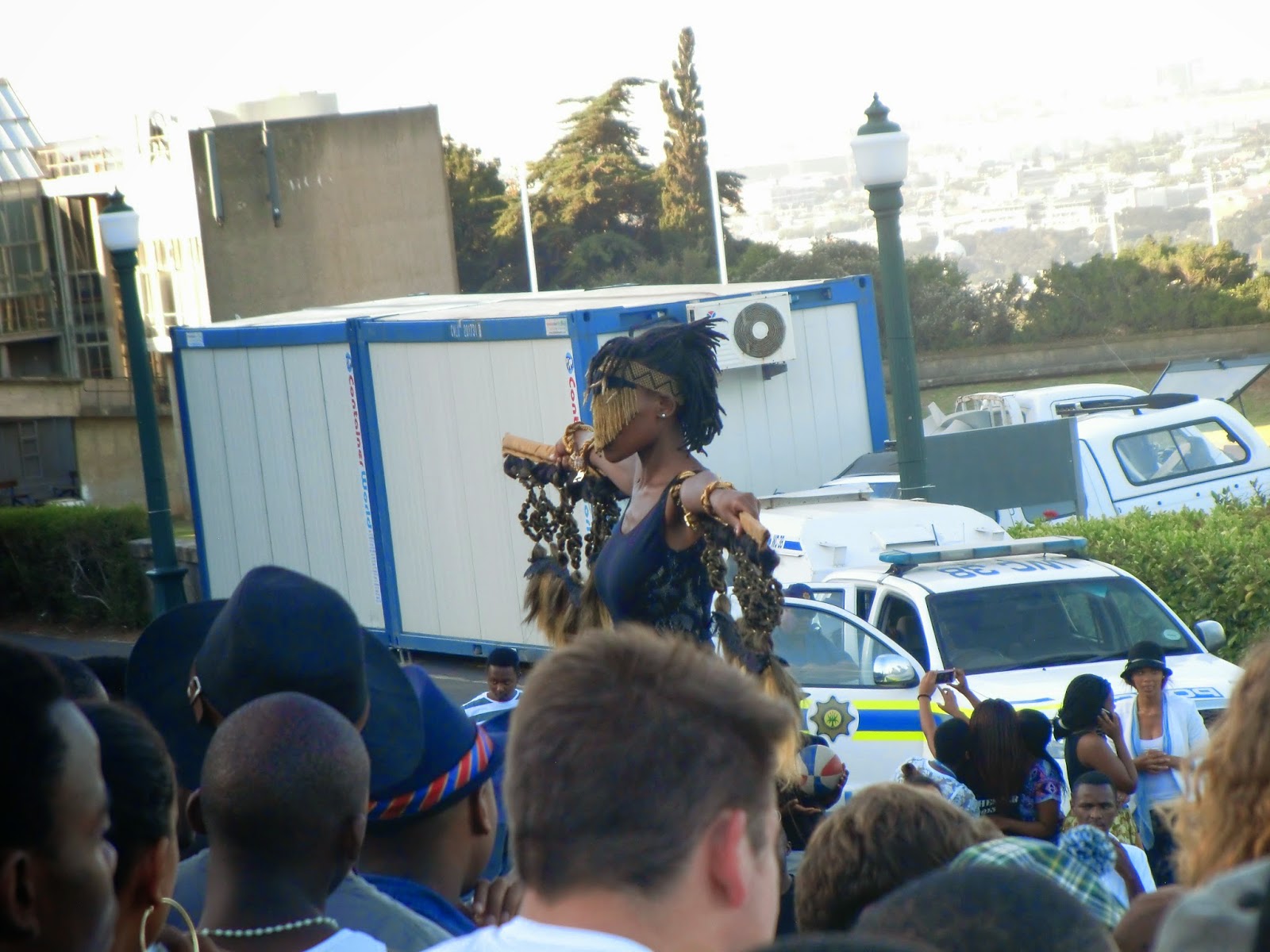 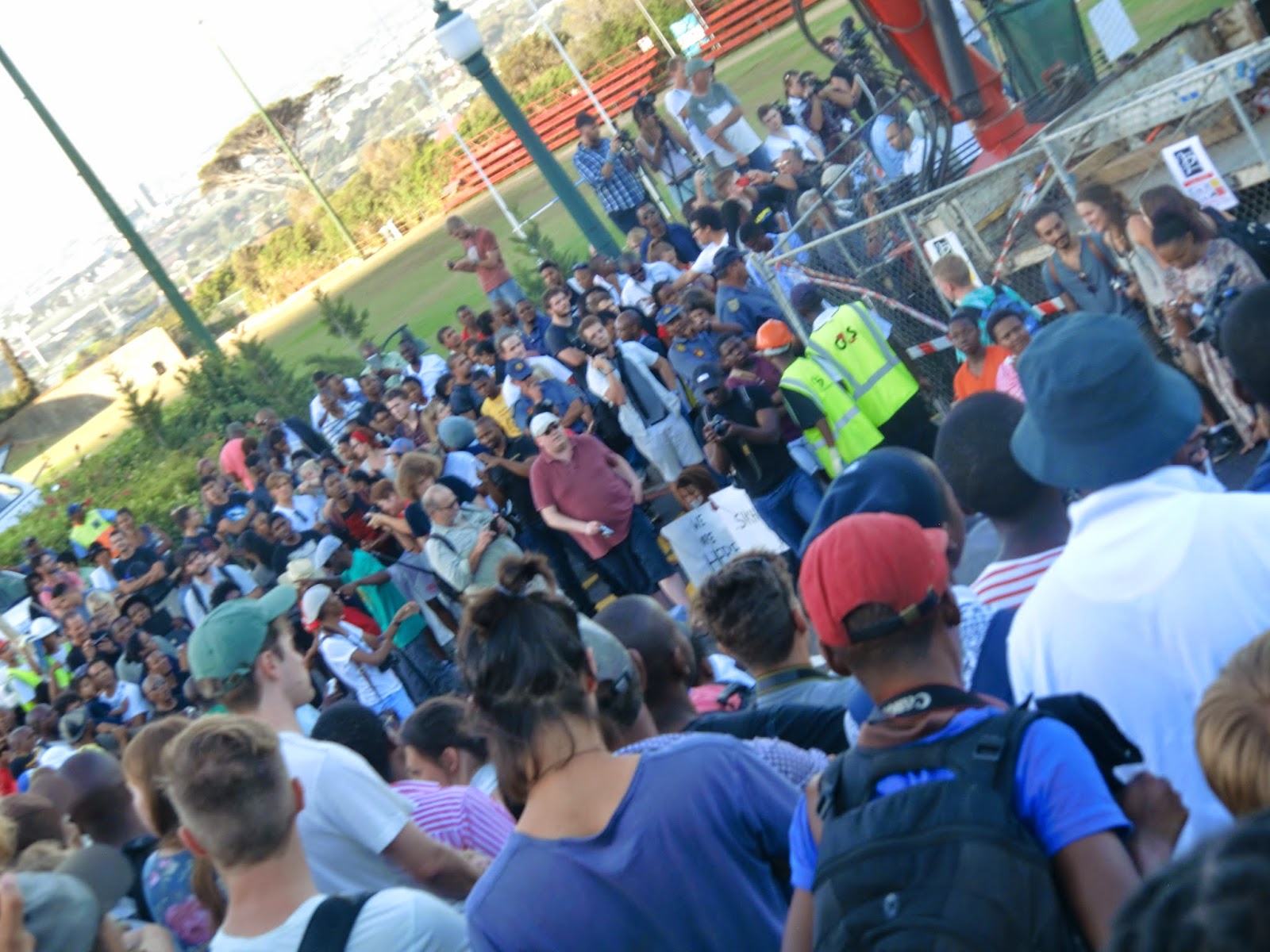 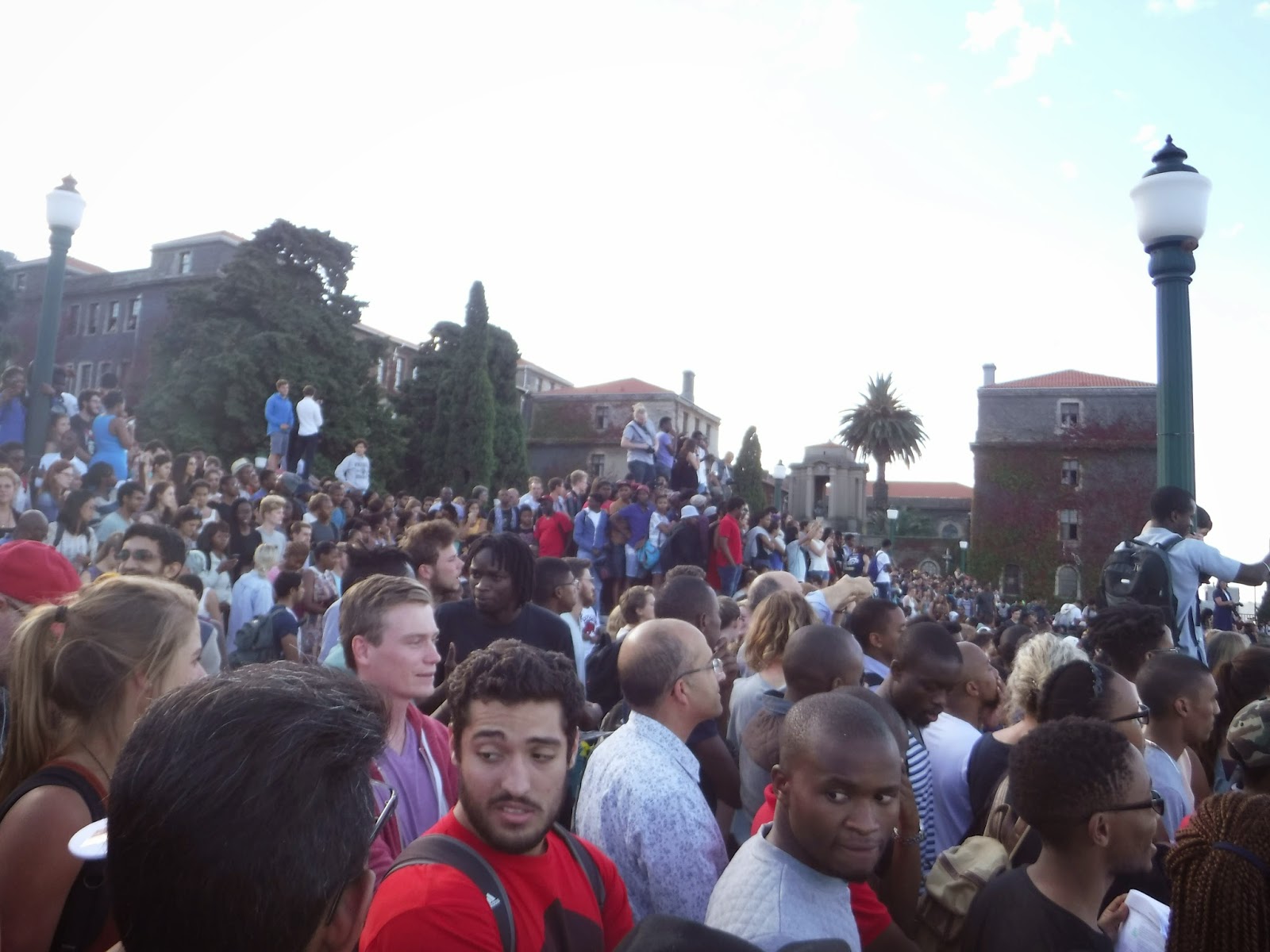 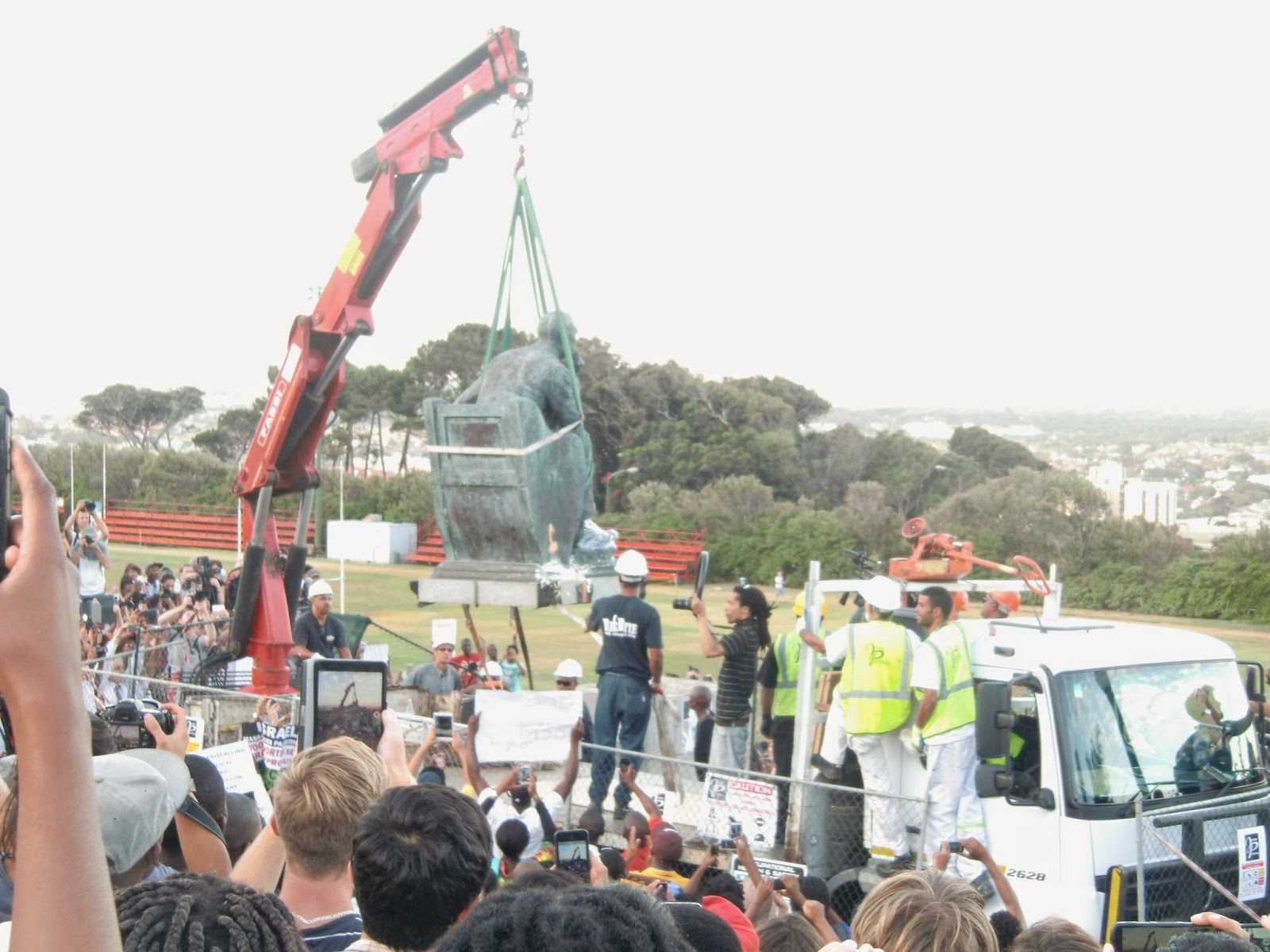 Amidst dancing, singing, chanting, and cheering (as well as a mostly inaudible speech), the crane lifted the statue off its plinth and put it onto a flatbed to take away. As soon as it was positioned, protesters swarmed the truck, splashing the statue with red paint, draping Rhodes in chains, and whipping him. The jubilation was incredible. 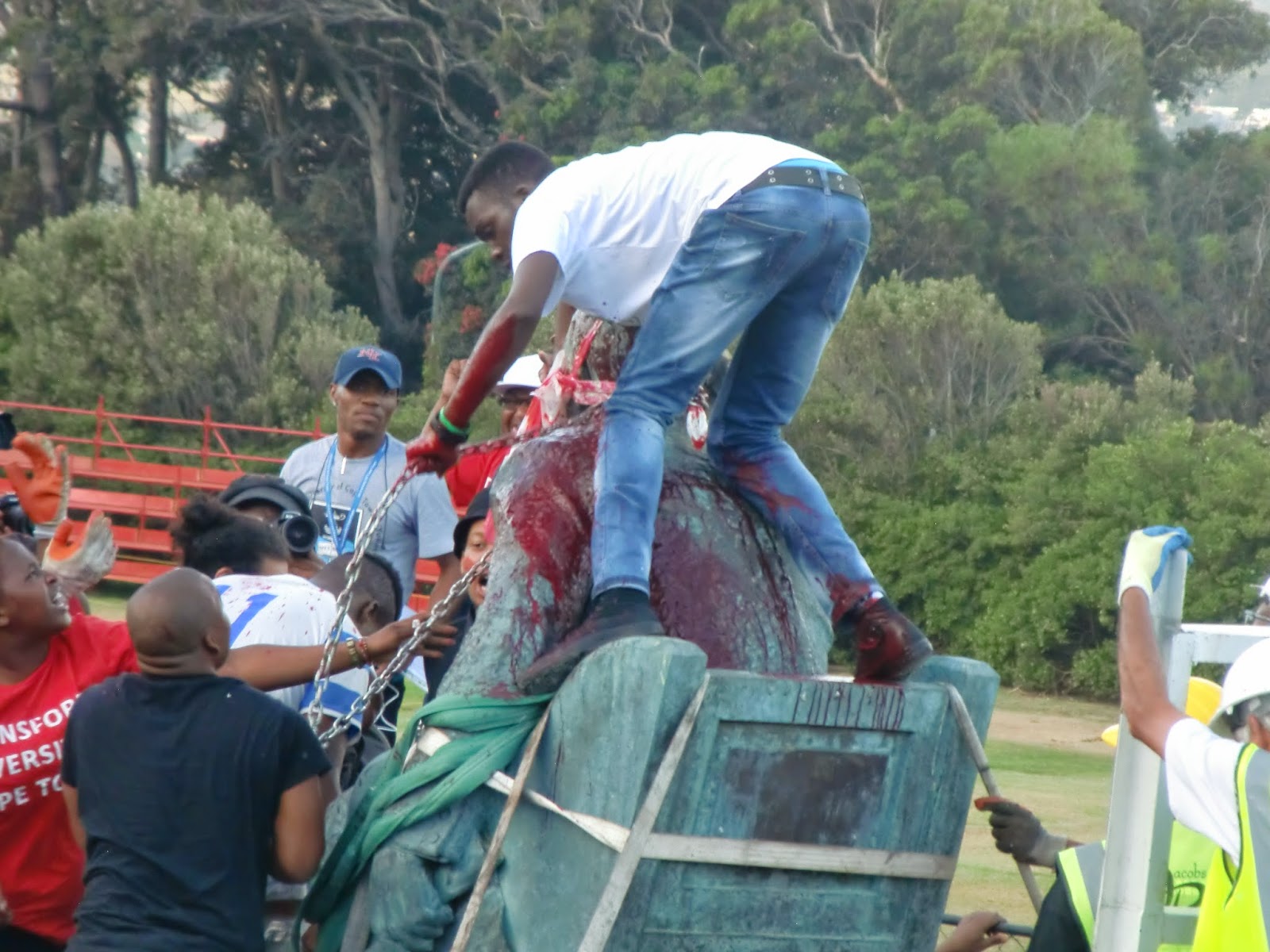 Time will tell whether this will spur the continued transformation in South African society, or even redress the imbalances at the University of Cape Town. The racial make-up of the student body is still disproportionate to the country as a whole. The faculty is even less representative of South Africa. One statue is down.

Who knows how many more will need to come down and how many buildings must be renamed. There are debates over whether history is being addressed, made, or erased. There are still the pressing matters of the massive inequalities that exist in South African society (to say nothing of the rest of the world). Unemployment is still high. The townships are places with intense poverty and sometimes unfettered violence. Kids I work with must walk home from schools in groups to avoid being picked off (or recruited) by gangs. At the same time, these impoverished areas are populated by caring, brilliant people with vibrant stories and incredible potential.

Optimism is a funny thing. It is not something that comes naturally to me. Partially, this is probably due to the fact that it is all about the journey, and not the destination. I do not know if any of us can truly visualize a completely and properly transformed South Africa. It is about having faith in the process.

Beautiful things are happening. I believe that the crushing oppression felt by some and the discomfort felt by the privileged can be ameliorated together.

I have to admit to being saddened by something, however. On more than one occasion, I have overheard conjectures regarding Rhodes' sexuality. The subtext appears to be that a gay Rhodes would be a greater villain, even more of an unnatural invasion upon traditional Africa. My understanding is that part of the decolonization movement is to reject the heteronormative structures imposed upon Africa by Christianity when the Europeans came in. I encourage that movement. We all should be able to find role models and seek out the paths that are best suited to our skills and circumstances. I would hate for those of us who have been un- or under-represented to be turning on each other, thinking that that would be the best way forward for our own empowerment.