February 22, 2015
It has been a bit since I wrote. I have not succumbed to ebola (turns out they don't have it here in South Africa...) nor have I fallen off the wagon, left the reservation, given up the goat, or any other idiomatic downfall for this intrepid student.

I am working on a write-up for this site about the madness that is the registration process at UCT. That will hopefully come up soon.

I am registered for classes, have attended week one, and am wrapping up a relatively quiet yet eventful weekend after the official start of the semester.

The week was a bit rough to start with. Students at this university (varsity, as they abbreviate here, somewhat less than the Australian "unie") are in an intensive three-year course of study. In smaller departments, such as molecular biology, they are most likely in small groups that take all their classes together. This creates cliques that are very difficult to navigate. I am someone who just naturally feels like an outsider. I have always been a bit of a weirdo. I am older than most of these students, in some cases double their ages. I am an American. Couple that with cliquish and generally clueless young people (I was not too aware of other people at that age, myself), and it was a lonely start to my time at UCT.

The campus is also a very compact unit. While it is beautfiul, it is also very crowded now. Imagine a small European mountain town, where everything is paved or cobbled, and the alleys are stairs going up to the next terraced level of buildings. Now flood it with more than 20000 students. Traffic flow of large groups of youths was not carefully considered. On top of that, there are numerous promotional events going on during the first week of the semester (thanks Coke and Mountain Dew...) that further constricted the movement across campus. While the food options on campus are pretty meager (and incredibly chaotic when the sea of humanity wants food), I have found a pleasant place to escape and enjoy a sit on a non-paved surface. Just off the north end of the campus, there is a small reservoir with an amazing view. 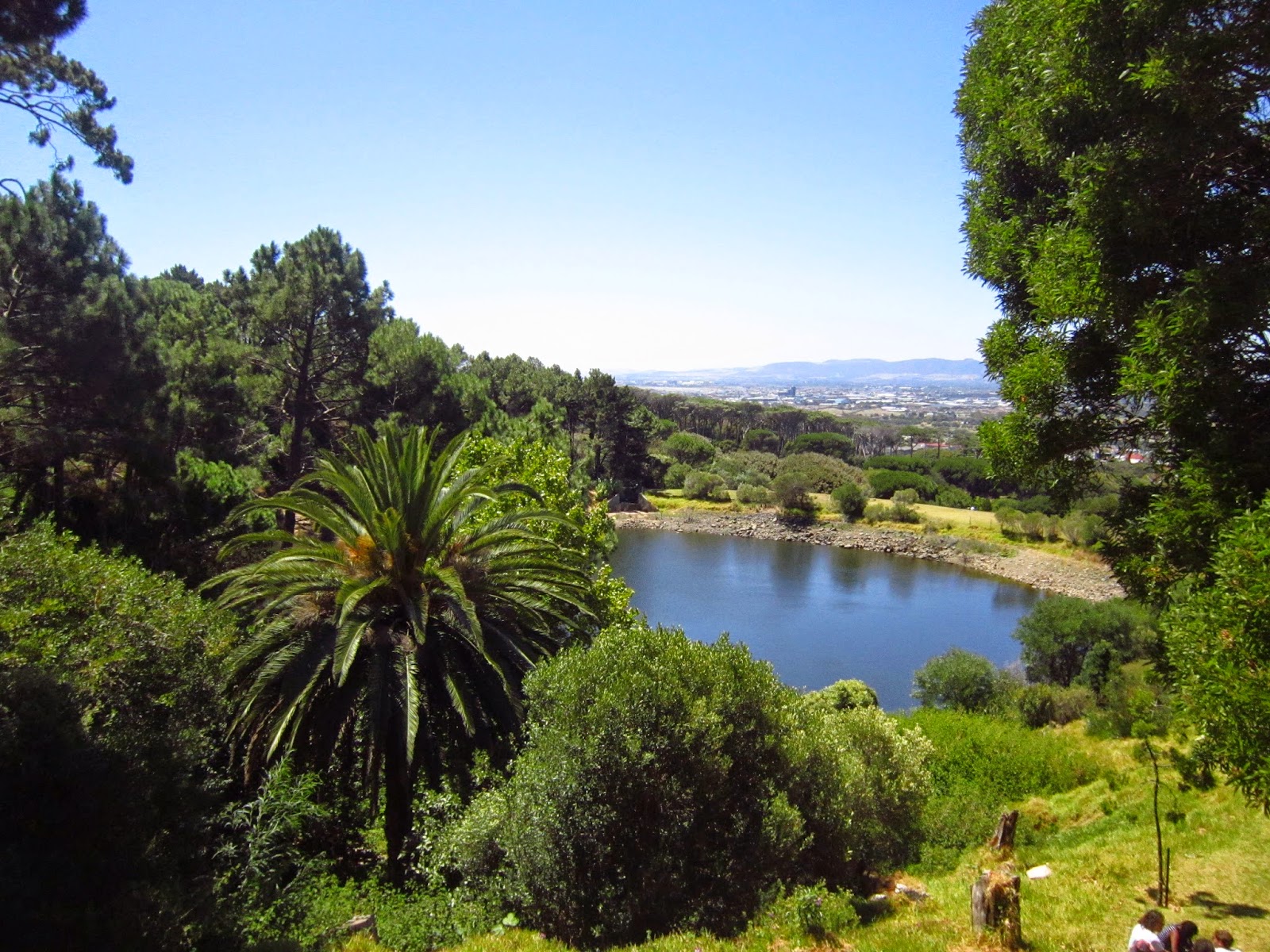 According to the security guards, I just need to be cautious about sitting too close to any of the taller grass, as cape cobras and "rattlesnakes" might be around. The group with whom I take my weekly walk in Kirstenbosch gardens laughed. For starters, there are no rattlesnakes here. Secondly, most snakes would not actively seek out someone sitting on the lawn to accost. Regardless, I am grateful for the general serenity achievable here in relation to the rest of campus.

My academic advisers at UCI helped me discover that I should not be in the structural and chemical biology course I registered for. This now means that I am taking a marine ecosystems course, an archaeology course on the early human hunter and gatherer populations of stone age Southern Africa, and an introductory intensive in Afrikaans. Some folks I have met in Cape Town get a kick out of that. They want me to share with them what I have learned. At this point, I know some personal pronouns, how to say "Ek is 'n a student aan die universiteit van Kapstaad"and a portion of the alphabet. It is sort of like when elementary Spanish students learn to say "?Es Maria en casa?" and "?Donde esta la biblioteca?" only less phrase-book useful. It is entertaining and holds the potential to be useful for something else I am doing on campus.

In the midst of my exhaustion, confusion, and loneliness I have found refuge in a student organization called Ubunye. They act as an umbrella organization for three student initiatives that offer mentorship and tutoring to disadvantaged high school students in the townships. They also have a debate league they started among the township students that has gone on the compete at the national level here.

Twice this last week I got to pile into a van with other TeachOut students to drive out to the Cape Flats to work with township high school students on their math and English. Due to scheduling issues, some of the schools cancelled their sessions, so I worked at a local yabonga (a community health centre). While the students were shy (many also do not have a good command of English, mostly speaking Khosa at home), I was thrilled to work with them and watch them in the course of an hour go from near-silent to laughing, solving problems, and giving me and each other hi-fives. I believe that these sessions, my Friday nature walks in the mountain above Kirstenbosch, and my time at meetings will provide the necessary soul-nourishment for my time here.

On Friday, I only ended up having one class meeting, which meant sleeping in. That was super-welcome. Then, Paarth and I decided to take the trail right above my lunch-lake to the Cecil Rhodes Memorial. We have been continually amazed at how revered the man is here in Southern Africa. While we do not learn much African history in school in the States, the general thing we do learn is that Cecil Rhodes ran the British colonies for the economic interest of the crown and was an imperialist dick who had a nation named after him (now Zimbabwe). Here, he is regarded as the great man who brought infrastructure and progress to the cape. He donated the land that the university sits on as well as numerous parks throughout the area. So, his memorial sits on the slopes of Devil's Peak just above the UCT upper campus. It is a monstrous Etruscan/Roman/Greek slab of columns, stairs, and metal lions overlooking the Cape Flats. Still, it has stellar views.

Had I not walked up to Upper Campus twice already that day and known that I would later be on my usual Friday nature walk, Paarth and I would have braved the ascent further up Devil's Peak. There is apparently an old fort that is pretty cool as well as undoubted awesome-er views. As it was, we were pooped and just looked up at:
Later, I met my mad pack of botanists and birders at Kirstenbosch Gardens for my favourite Friday tradition. We walked up the mountain and along a couple nature trails, where people were constantly examining different plants (the parasitic white-black ink flower, and a particularly beautiful orchid growing along one of the small waterfalls) and spotting avian life. As the sun set, we sat out on the lawn and shared a picnic.
Saturday was spent catching up on sleep, reviewing my notes on marine ecosystems, studying my Afrikaans, and cooking. I caught a cab into the city to a meeting. I also discovered that my friend Michael is in the show Black Sails which is being filmed here in the Cape. I have not seen it, nor do I know anyone who has. I am interested in checking it out and hope that my friend continues to get steady work. He is hopeful, as he does not play a pirate (who have very short life-spans).

Sunday is for penguins!

Remember that my small group won the best presentation during orientation. Our reward was a tour to see the penguins. There is a small colony of African penguins who apparently decided to move in on Boulders Beach in Simon's Town.

Simon's Town is the home of the South African navy. The town was apparently home to a mischievous dog named Just Nuisance, who befriended local children and sailors and is commemorated with a statue in the village park. The penguins are protected by fences that keep them from being too accosted by humans (and vice versa... frequent signage reminds everyone that penguins bite). Still, they spill over into the surrounding areas. Had we more time and had the weather been a little warmer, we could have swam with some of them. 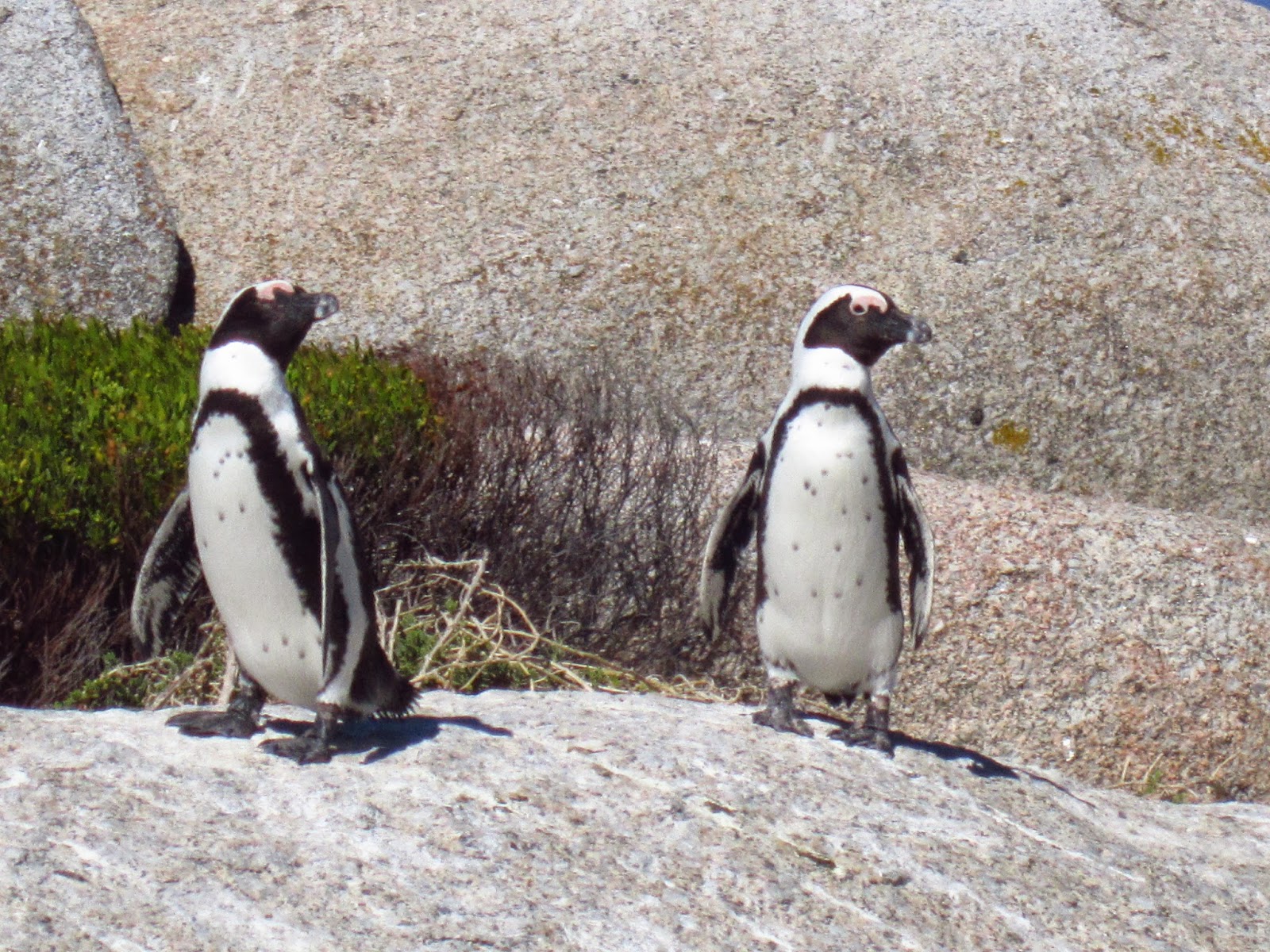 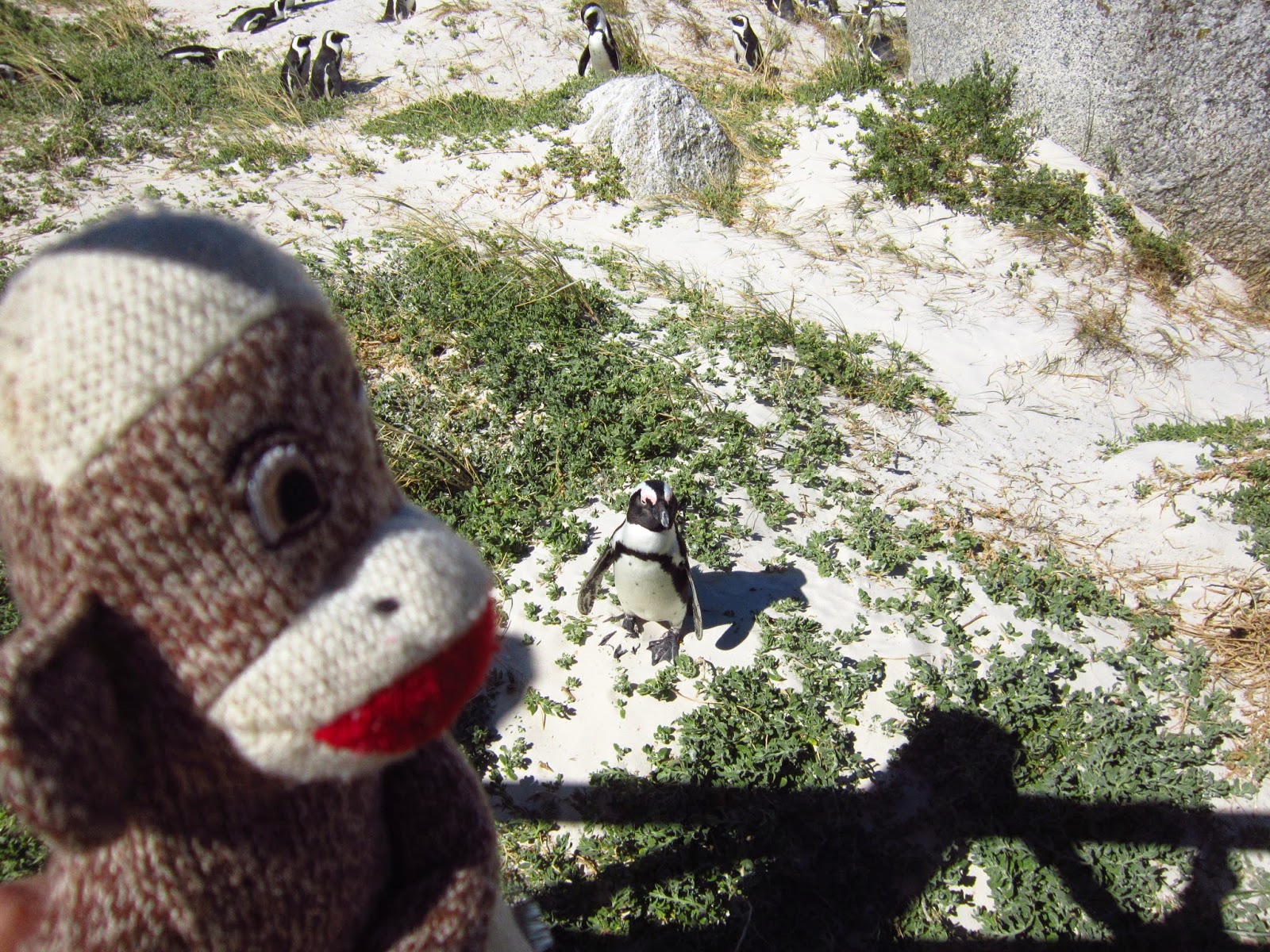 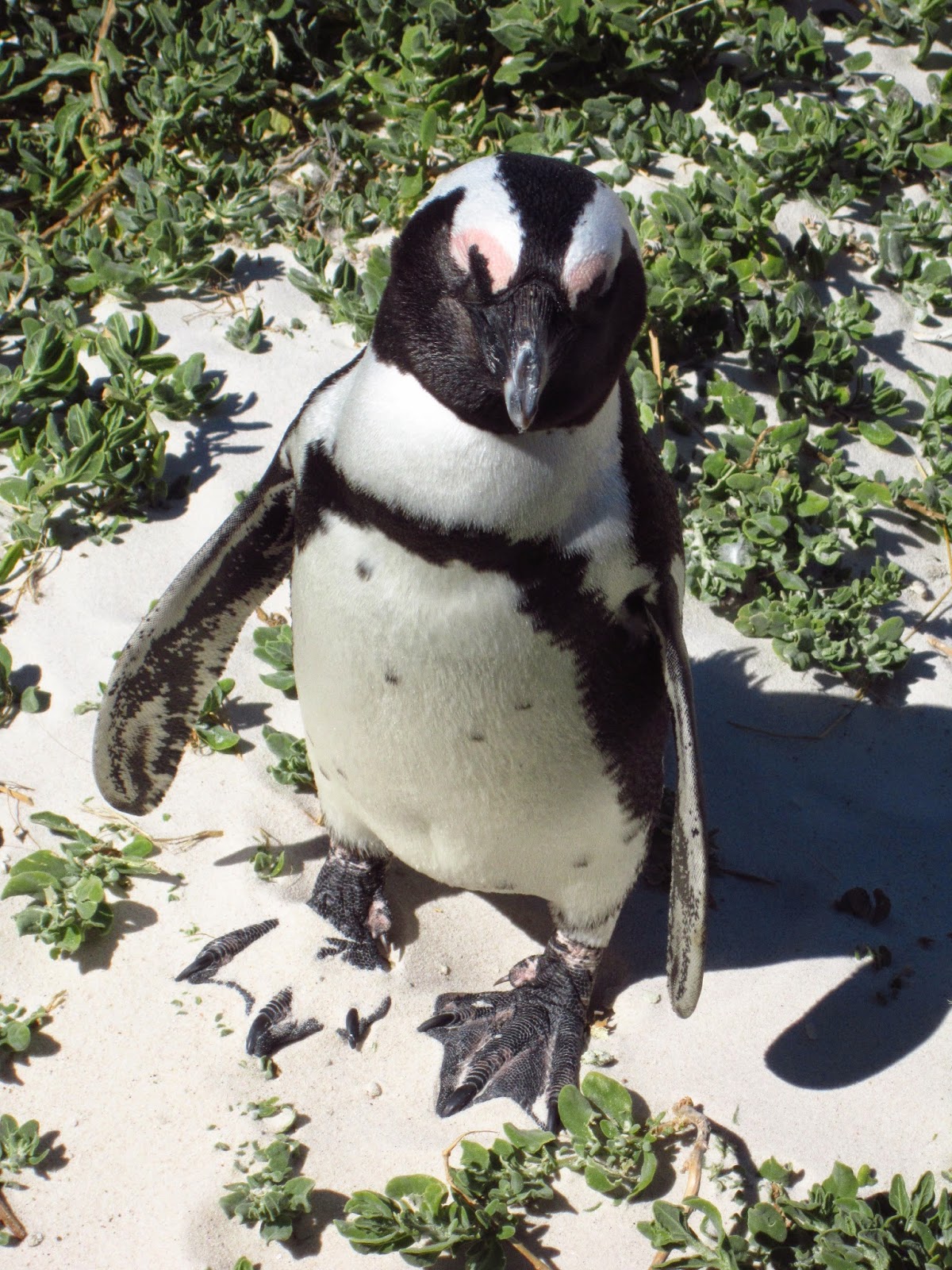 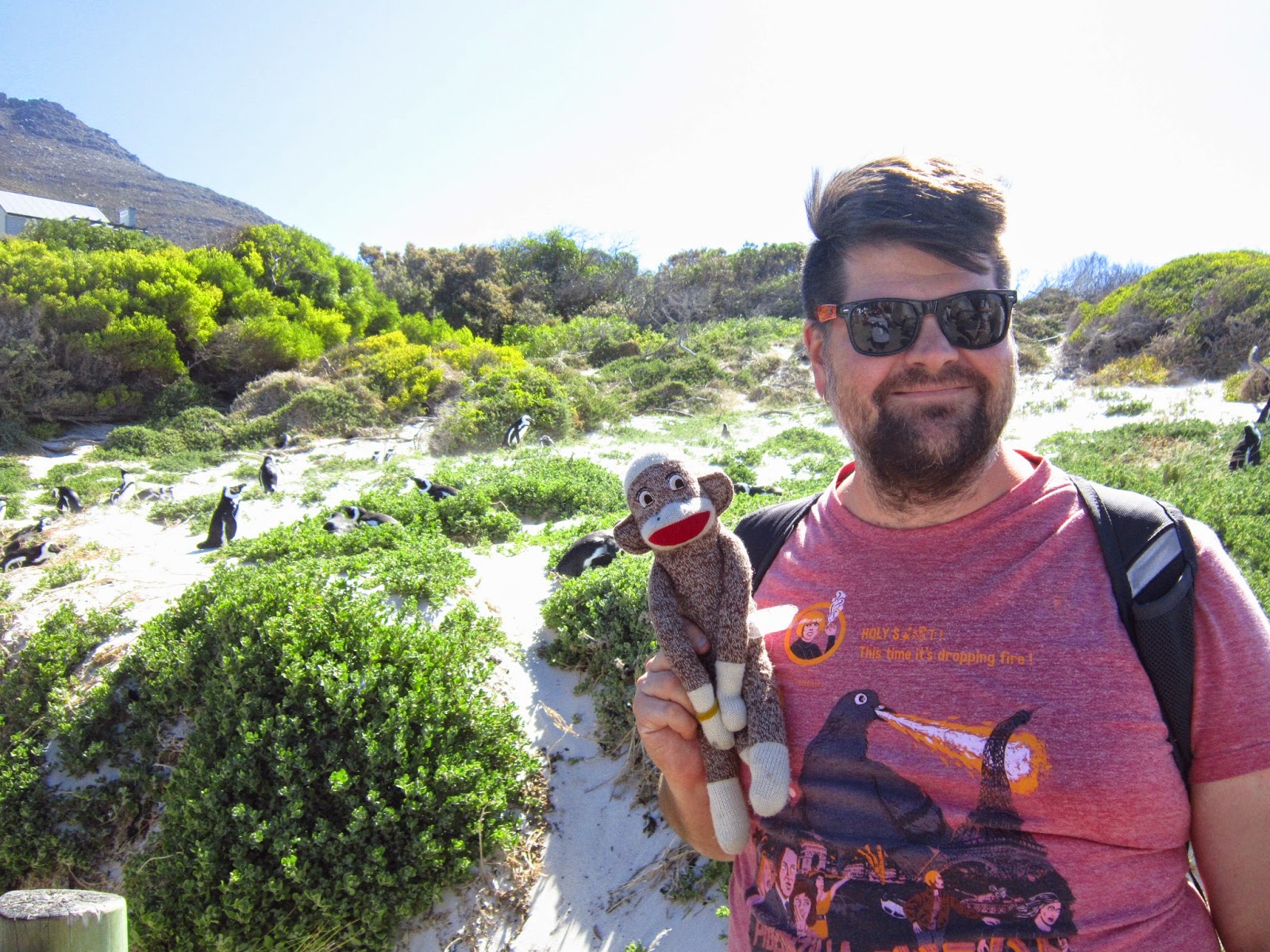 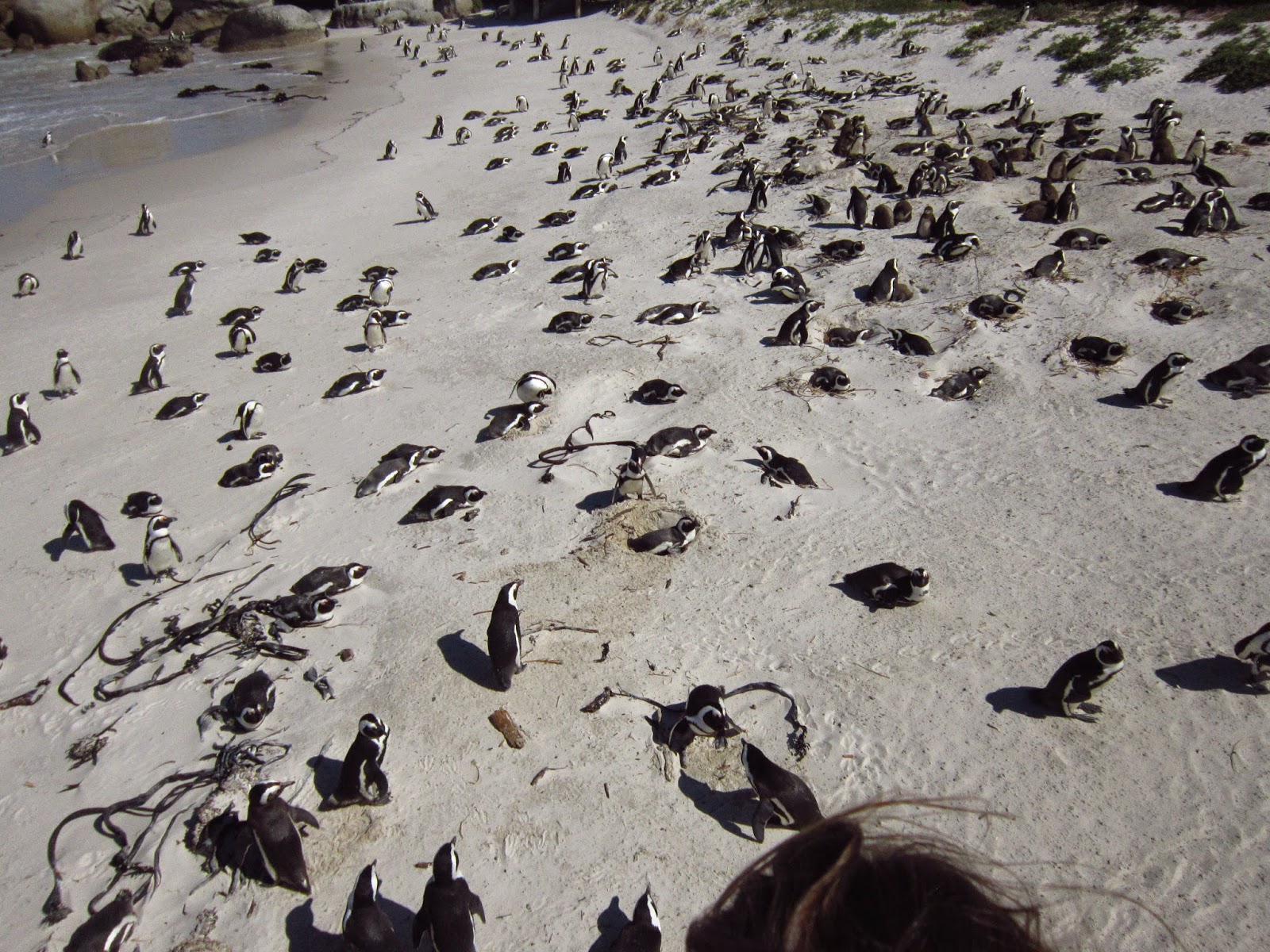 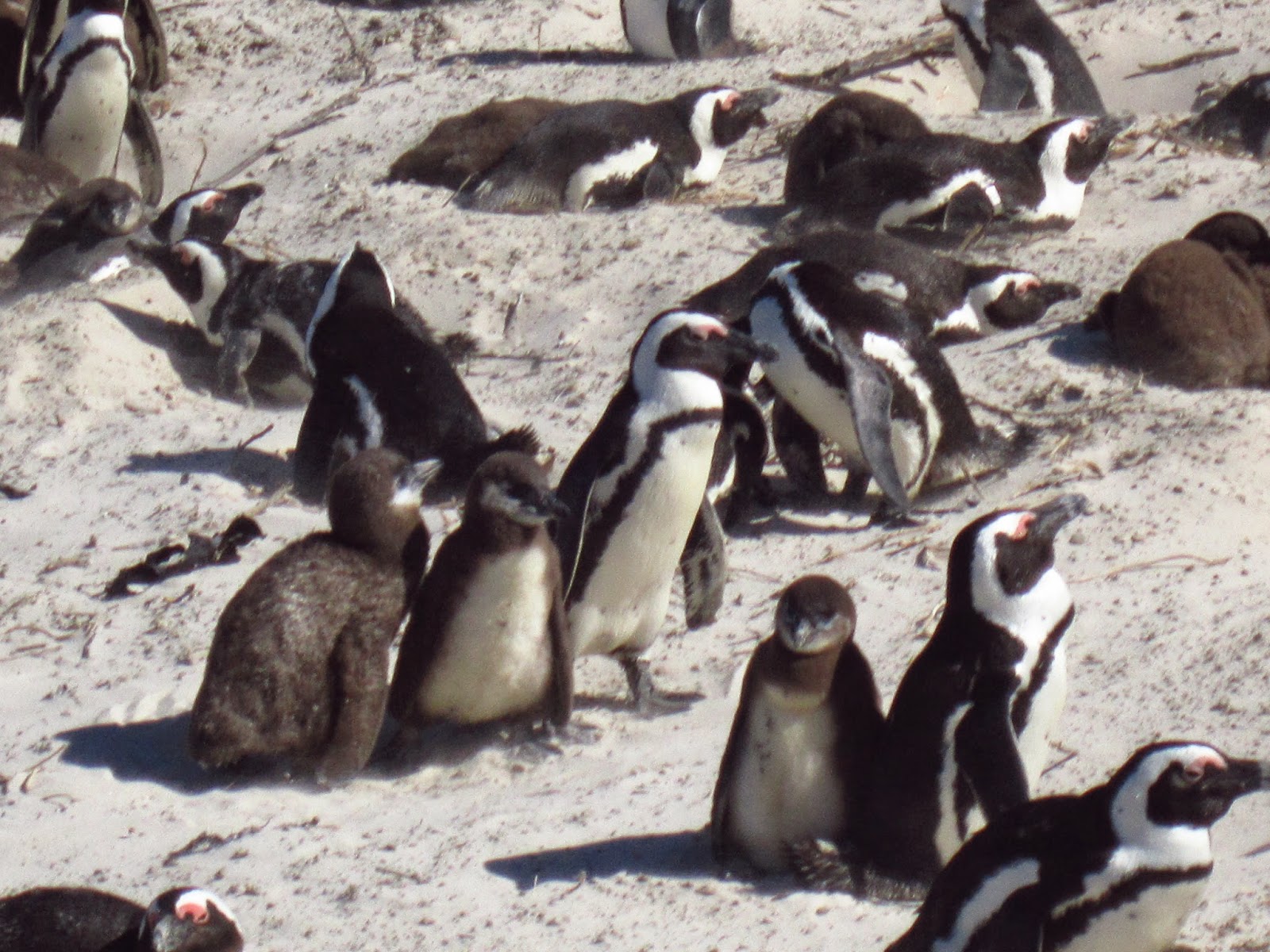 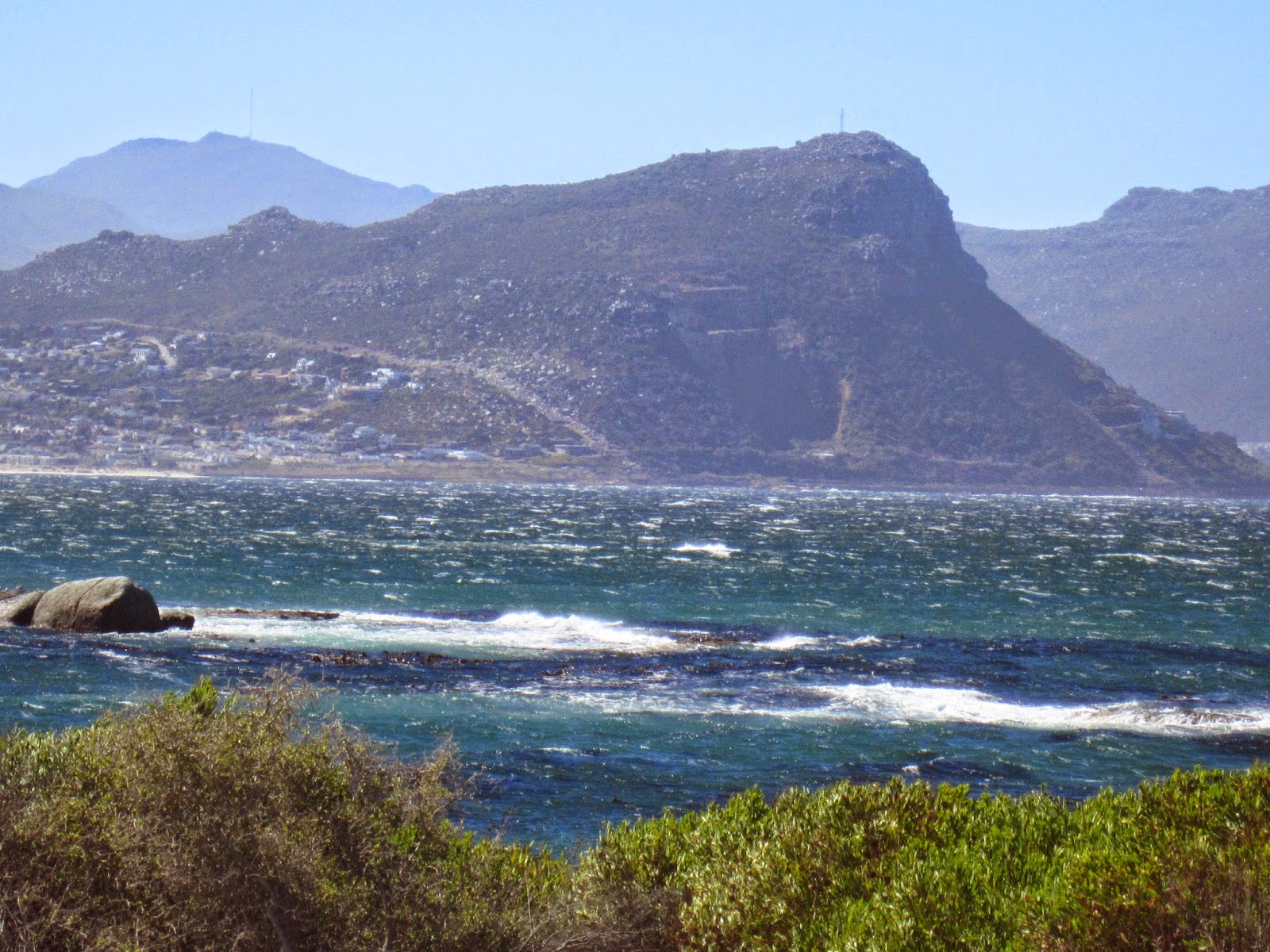 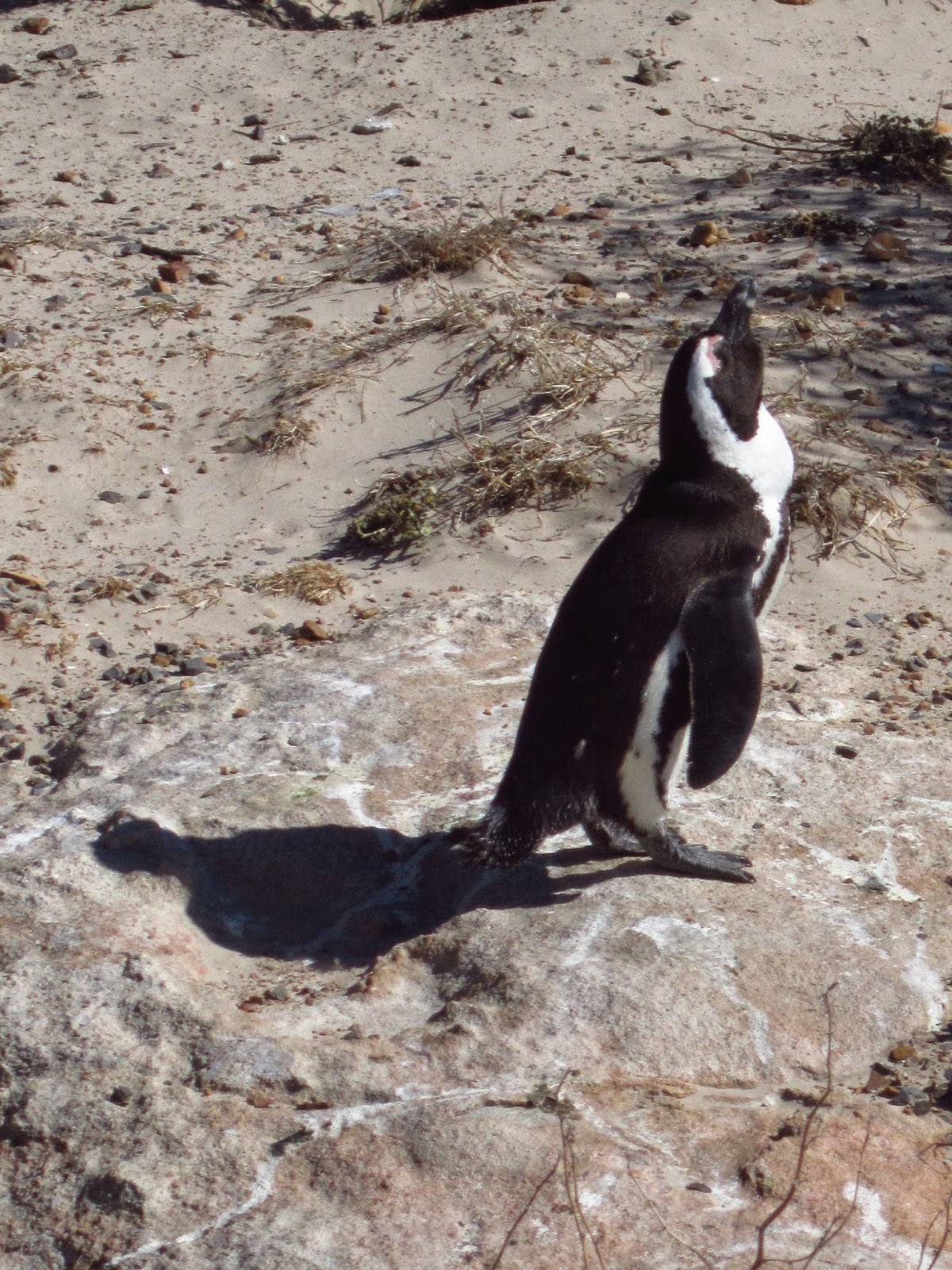 As a bonus, we got to see more of the cape wildlife than just its Antarctic colonisers.

While the boulders of the beach made it particularly enticing, the water was pretty cold and we did not have sufficient time for a dip. My housemates and I have decided that some weekend soon we will take the train out to spend a day at the beach. I walked to my Sunday night meeting and heard an excellent talk on the effects of alcoholism on children. Ahh, I really do live the wild life.

Tomorrow, it is back to the grind. I am not always one for living for the weekend, but circumstances may warrant a re-assessment. Despite some of the social and academic frustrations, I am grateful for the amazing opportunity I have to be here in Cape Town for these months. I look forward to more adventures. I also hope to soon have some more informative posts about the mechanics of studying at UCT for future study abroad students to reference.

Erin G. said…
Rock lobster--definitely a highlight Hahaha. The penguins are adorable! Sounds like you're slowly adjusting! :) miss you terribly!
12:33 AM

HazMatt said…
It is sad how few people actually understand my giggle at that sign. They thought I was really into sea food. Others just stared blankly at me as I said "It wasn't a rock! It was a rock lobster!" in my best Fred Schneider voice.
2:43 AM