I may need a more original title but wanted to give people an update and notification that I shall be sans-internet (most likely) until Wednesday night. Why? Read on...

Things have been blessedly slow of late. I stood in a four-hour line to pre-register the other day (slow, maybe not so blessedly). Pre-registration is where international students are checked to make sure that they have insurance, a study permit, and fee payment. Essentially, it is a redux of the visa application process, only where the visa required mountains of paperwork, pre-reg just has you stand a lot. In the end, they scan your passport, take the photocopy of your passport and visa you brought, and give you a piece of paper saying you are now cleared to register. Due to load shedding (my family snickers, the rest of you should look up Eskom and their delightful sparring with the South African government over electrical infrastructure), the pre-reg line was reduced to two laptops running on battery. It bottlenecked things to say the least.

Different faculties (departments) hold their actual registrations independently on various dates. Many of the faculties held theirs on Friday. Mine? Next Thursday. Class starts the day after that (sort of, maybe, depending on who you ask), and then the semester kicks off in earnest (allegedly) the following Monday.

The orientation has essentially come to a close (I guess). The schedule just sort of tapered off into calendar blank spots. My buddy Paarth and I decided to capitalize on this dead time, taking the what-the-hell attitude that maybe we should go and see Victoria Falls.

"We might never be here again, we should do it..."

That sort of thing. So, we have spent the last couple days trying to conceive and book this little adventure to Zimbabwe. Included was obtaining yellow fever inoculation (lest we venture across the falls into Zambia which may or may not be at risk) and malaria pills; booking multiple flights (no one flies direct, and Africa has an assortment of small regional carriers for less), some online, some by phone; tracking down a hostel that provides a less frat party atmosphere; identifying activities; and likely forgetting loads of other important stuff.

For a while, it felt like nothing was working. This could have meant one of two things. It might be symptomatic of my first-world belief in a specific type of efficiency and convenience that Africa, for better or worse, is not able to accommodate. Otherwise, the universe might just be saying "No." I was becoming convinced of the latter but now believe it was the former, since suddenly everything came together. It has also been pointed out that Mercury Retrograde is a likely culprit.

While the other housemates are hosting a little pool party for friends, Paarth and I have been busy scuttling about to do laundry and prepare our knapsacks for the impending adventure.

That being said, I will not have much, if any, access to the internet for the next few days. Given that we appear to be in a land where the phones and the antelope roam, I may not have much cell coverage (heh, imagine Stanley heading into the heart of Africa wondering if his phone would have any reception). I should be getting to the finishing of my packing and then off to an early bed for the cab comes early. I will be back in Cape Town Wednesday night.

But before I go, some pictures...

First, a couple views of the mountain from our street and the back of our house. 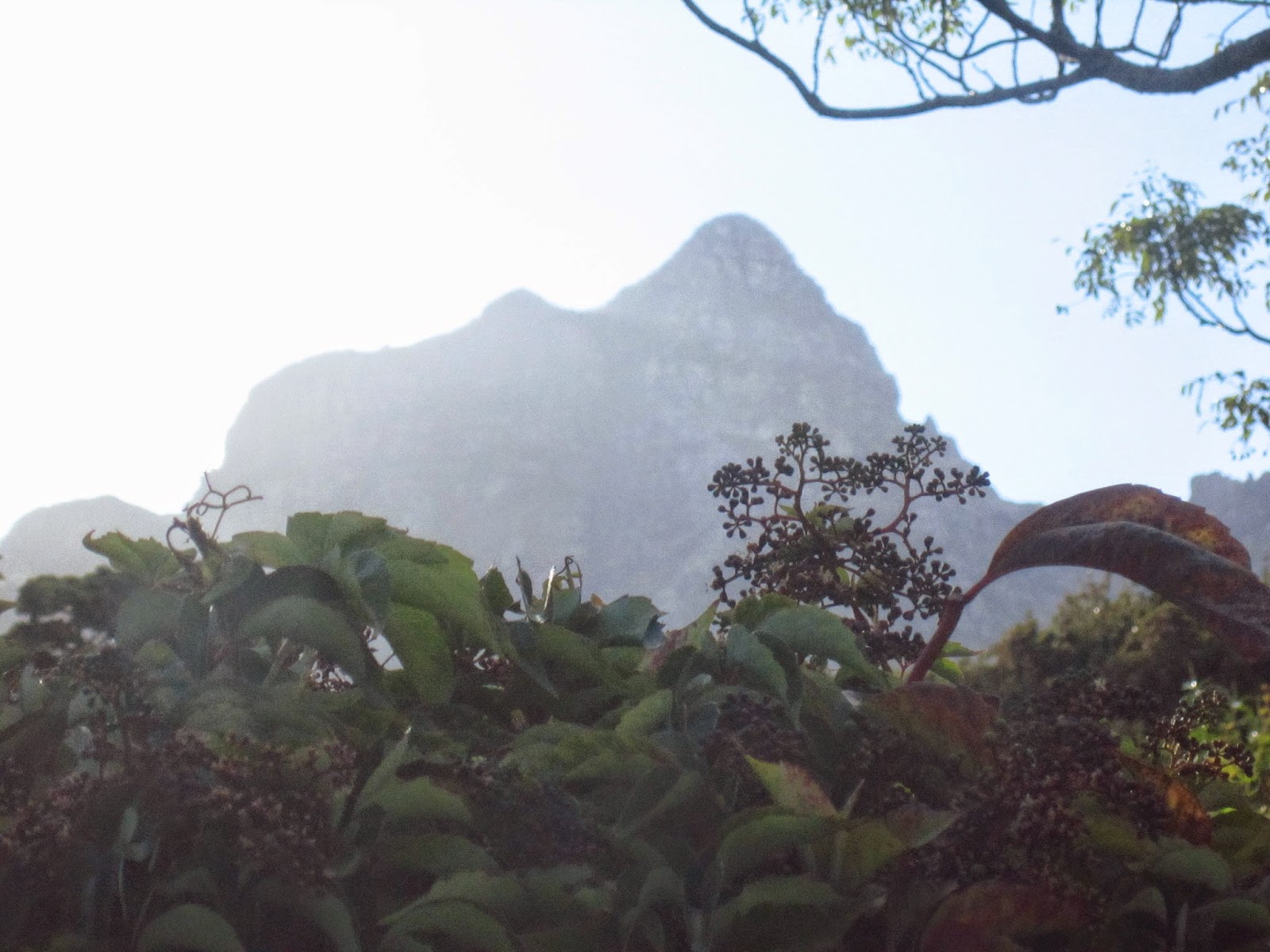 We live two roads over from Middle Campus, which includes the main walkway to Upper Campus.


UCT hosts a Fresher's Braai (Fresher for freshman, Braai meaning a bbq) on its rugby field. It is quite an event. Our reward for enduring pre-reg was the ticket to the braai. It was one of the most organized components of the university (varsity, as they abbreviate it here). There even was a dedicated vegetarian and halal queue. There was a stage with a variety of bands and house music acts. Mostly, though, there was a beautiful day and a rugby field full of new students. We met up with some of our Norwegian friends for the braai and were then joined by some new students from Malawi. Monkey and I lay out on the lawn as people discussed soccer, inequalities in child care, and the multi-dimensional legacy of Cecil Rhodes. 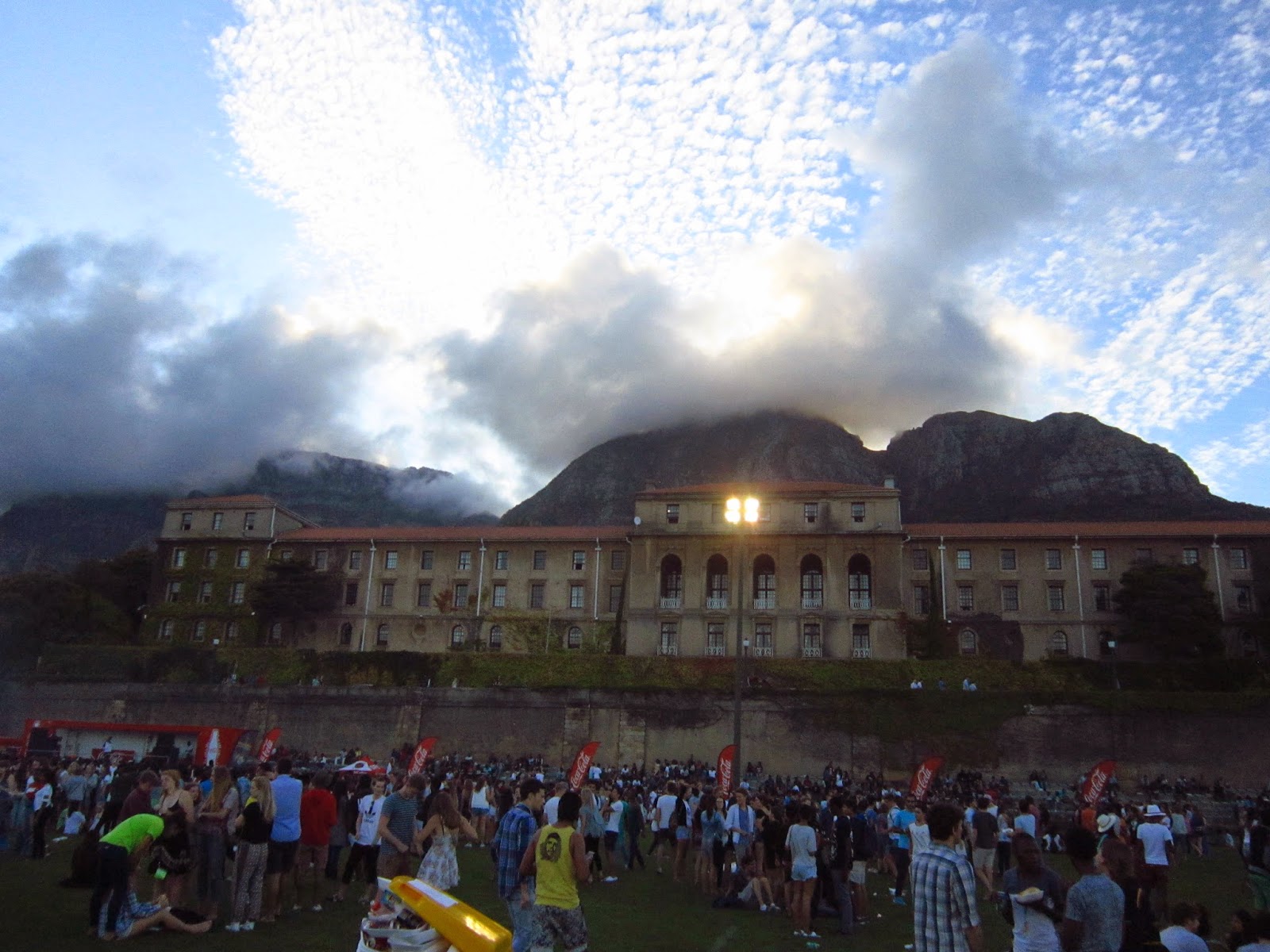 Then, Friday I was invited to join some folks for their weekly ramble through the Kirstenbosch Botanical Gardens. With ages ranging from 20s-70s, the group of us entered the gardens (thanks to memberships held by participants, one of whom is actually an employee) and hiked straight up the east side of Table Mountain. We then leveled out on a trail along the mountain's side, with stunning views across the Cape Flats. The recent cloud covers had helped clean the air, and we could view the Hottentot-Holland (which served as the inspiration for Mordor to a young Tolkein who was raised here) and Cuckoo Mountains in the distance. Gigi, remaking herself as a botanist later in life, took me through some aspects of the Fynbos, the dry shrubland vegetation of the Cape. I wish I could retain better (and understand all the Latin names thrown around with a South African accent). We also came across a couple of juvenile owls that this group has been watching since they were eggs. The majestic creatures did not seem to mind our presence. One sat on the railing of a small bridge, and merely watched as we walked past. I was within 20cm of it.

This motley gang of nature lovers has a couple of interesting traditions. At one point on the mountain, there is a bridge. The foliage recedes to offer up one of the great views. Normally, the group stops for a sherry. Since one member had just been confirmed in her position at an important archaeological heritage agency in South Africa, the sherry was replaced with champagne. I politely held the plastic cup of bubbly and toasted the success, but then offered it to the new employee. I sure as hell did not need it, and I figure she deserved a second cup.

The other tradition is that after the walk, the group returns to the carpark to fetch bags out of their cars. They then return to the gardens (now closed, but employee privileges I guess) to have a little sunset picnic on the lawns. They shared food and stories and successes and a little bit of wine (they like their grape matter in these parts). It was a delight to be a stranger sitting in on this odd group's weekly rituals and to be invited back. I hope to make it as near a weekly thing as possible. 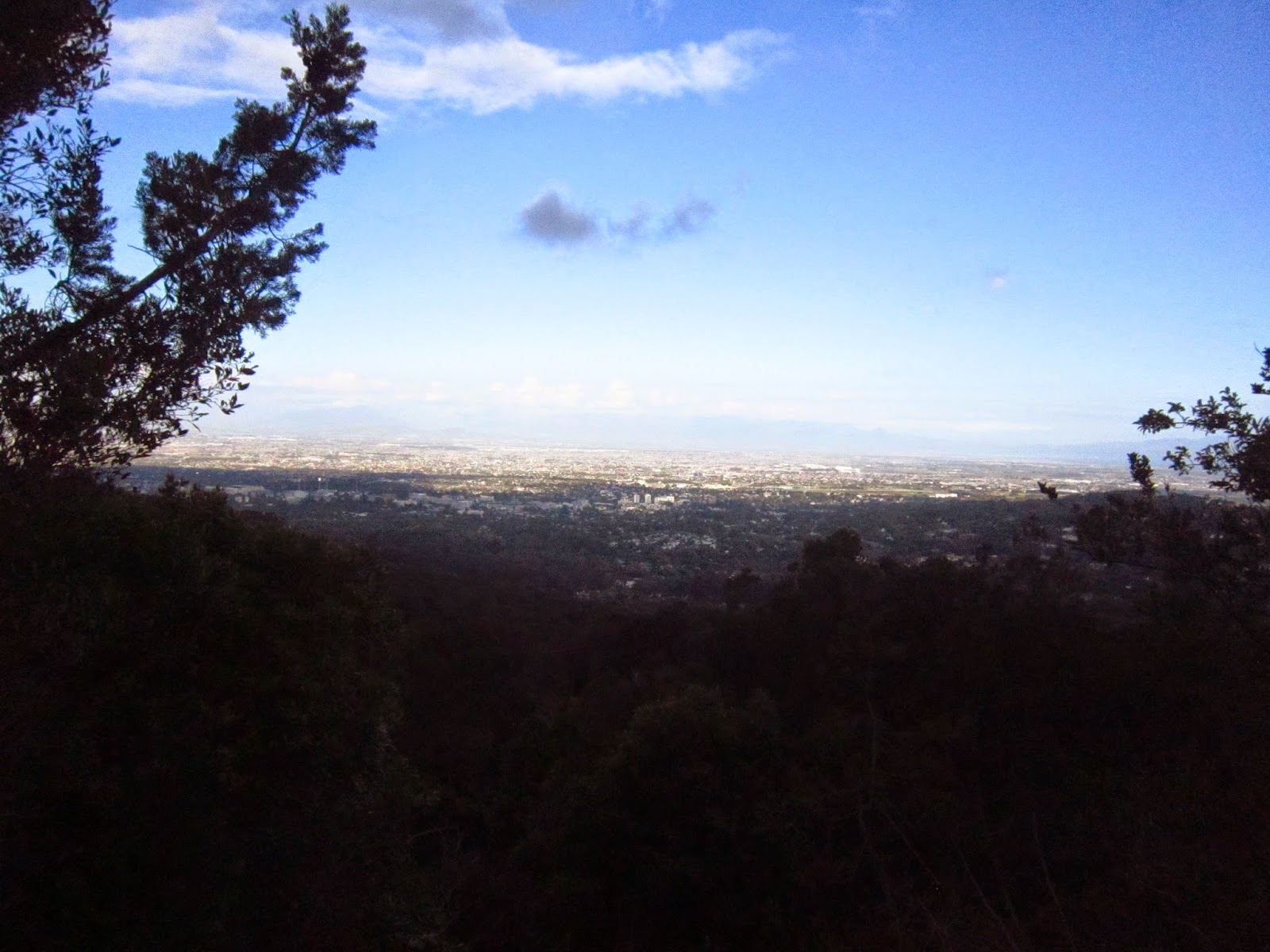 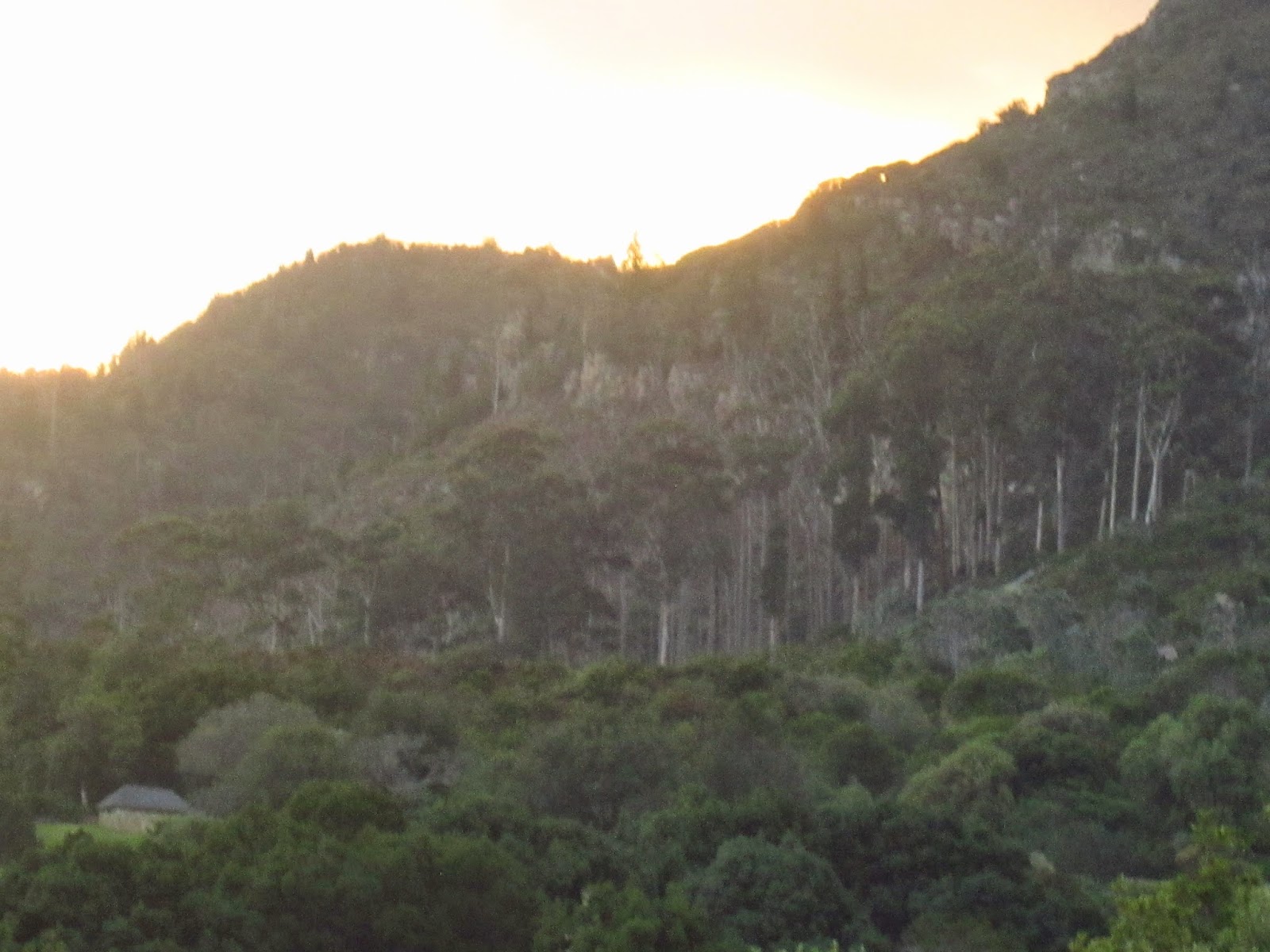 So, until I get back from Zim, be excellent to each other and everyone else. I shall return with tales of one of the seven wonders of the natural world, elephant back safaris, possible day trips into Zambia and Botswana, and who knows how much more.

We get back late Wednesday evening. Registration for classes is Thursday. Wheee!