Zimbabwe and Botswana (with a technicality on Zambia and Namibia)

February 12, 2015
My housemate Paarth and I are sticking to the story that we visited four countries. Sure we return to South Africa with stamps from only two nations. We individually only made brief footfall on the Zambian side of the Zambezi River with no passport check, which bypassed certain grey areas of the world's designation of that nation's risk of Yellow Fever. True, we only touched territorial waters of the nation of Namibia while cruising down the Chobe River in Botswana. Whatever, we made four!

There was a brief downtime in our orientation schedules. Prudence might have dictated that we spend the time further preparing for registration, getting to know our way around the UCT campus, and settling in here at Grotto Road. However, we felt more inclined to use the time to have a little adventure and tick off a couple of the items in our travel want-lists. So, with much hassle, we planned a quick trip (on three different budget air carriers) to Zimbabwe to see Victoria Falls, one of the wonders of the natural world. The small town of Victoria Falls is almost on top of the falls, which made it easier for us than the larger yet more distal town of Livingstone, Zambia. 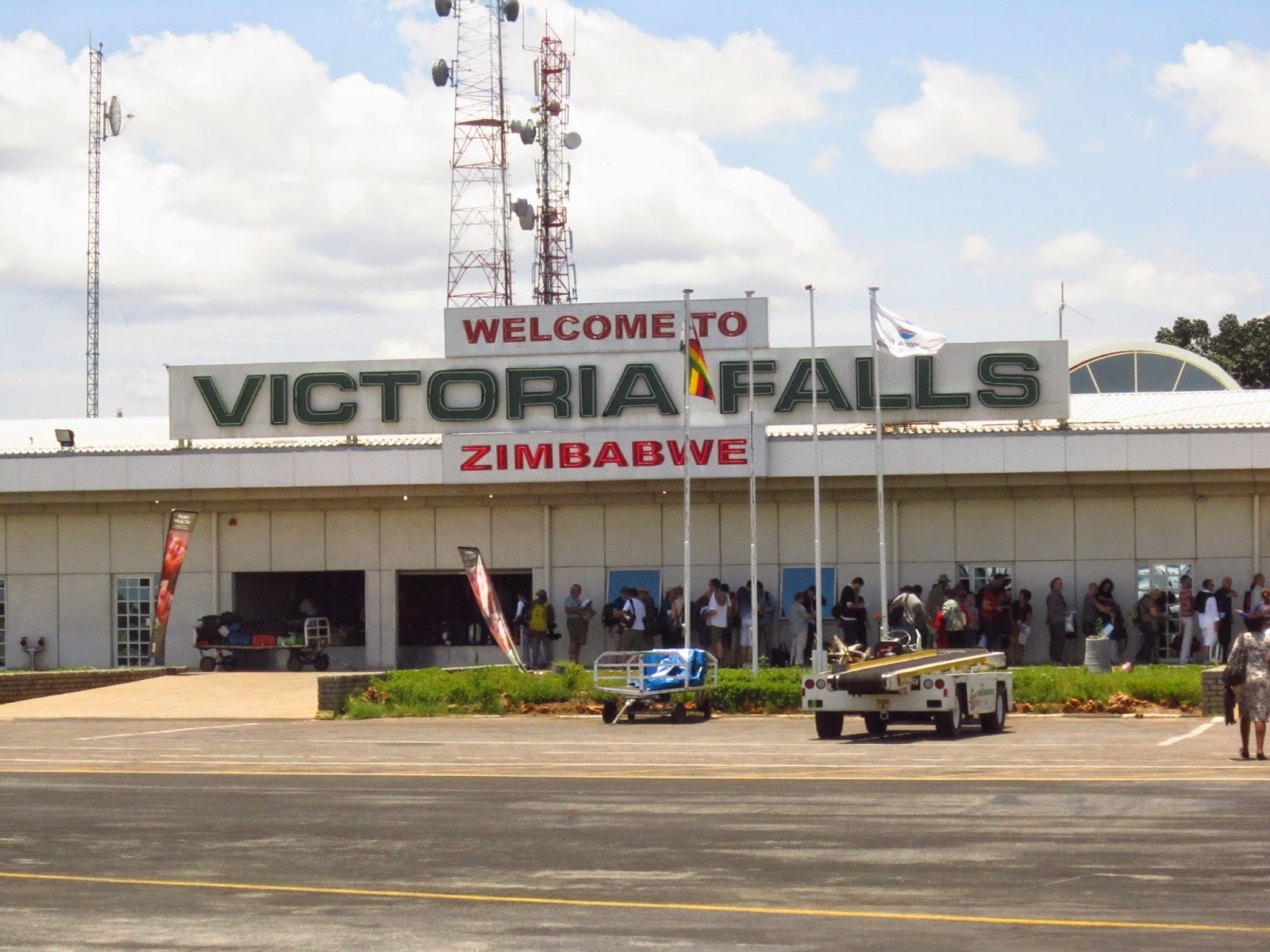 We managed to book into the quietest of the three backpackers in Victoria Falls. Neither of us being party animals, we wanted to steer clear of the usual hippie/frat-party vibe that often prevails in most hostels. While Victoria Falls Backpackers was an extra 1-1.5km from the falls, its remoteness turned off the drinking-til-4am types. We enjoyed the funky atmosphere, manicured grounds, and local artistry. They also had a little pond stocked with those fish that will nibble the dead skin off your feet. It was an odd sensation, more so for the ticklish Paarth. Sleeping in bare twin beds under mosquito nets took some getting used to, but Paarth, Monkey, and I managed.

We used that first afternoon to take a stroll through town and then trespass on the grounds of a posh nearby safari lodge to watch the sunset over the Zimbabwean bush.

We had pre-booked some additional activities, to pack in as much as we could to the visit. We passed on some of the popular activities (helicopter tours, sunset river cruise, zip line...). I had figured I would try the bungie jump off the bridge spanning the gorge between Zimbabwe and Zambia, but it turns out they have a weight limit. I was over that limit. Oh well. It was a whim and by no means a long-held dream.

Paarth's first morning involved a whitewater rafting trip on the lower Zambezi River. He had a terrific time. While he was off doing that, I took a long morning stroll through a portion of the national park (the town actually sits in the middle of the park) leading to the falls. After the mild bustle of desperate Zimbabweans attempting to sell tourists their now-defunct currency and oddly uniform craft items, the quiet road through the park and along the river held a much needed serenity. Besides the possibility of spotting some game on foot, this track boasts a giant, ancient baobab tree. This one is massive and upwards of 1500 years old. I heard an elephant and spotted a crocodile down by the river's edge. Mostly, though, I encountered baboons and birds.

Ultimately, Monkey and I made it to the Victoria Falls park. It was $30 to get in, but by golly it was worth it (I ended up returning for a second visit with Paarth). There are lots of debates on the internet about whether that side or the Zambian side is better for viewing the falls. We decided on visiting the Zimbabwean side, as it was easier for us to plan for. I heard, from an Australian family staying at the backpackers, that the Zambian side is indeed amazing. Oh well.

The park stretches along the gorge opposite the falls on the Zimbabwean side. All along there are viewing spots to see the falls. They start out at one extreme end, called the Devil's Cataract. As you go along, you get progressively wetter. The sheer quantity of water dumping over the edge kicks up a mist that creates a perpetual precipitation in the immediate vicinity. While I was in dry scrub just before entering, the edge is a rainforest in the truest sense of the word. By the end of the falls, I had my rainjacket on and felt as though someone was spraying me with a hose.

Oh, right...the falls are truly stunning. Easy for me to forget the emotional response. It is an immense power and beauty. 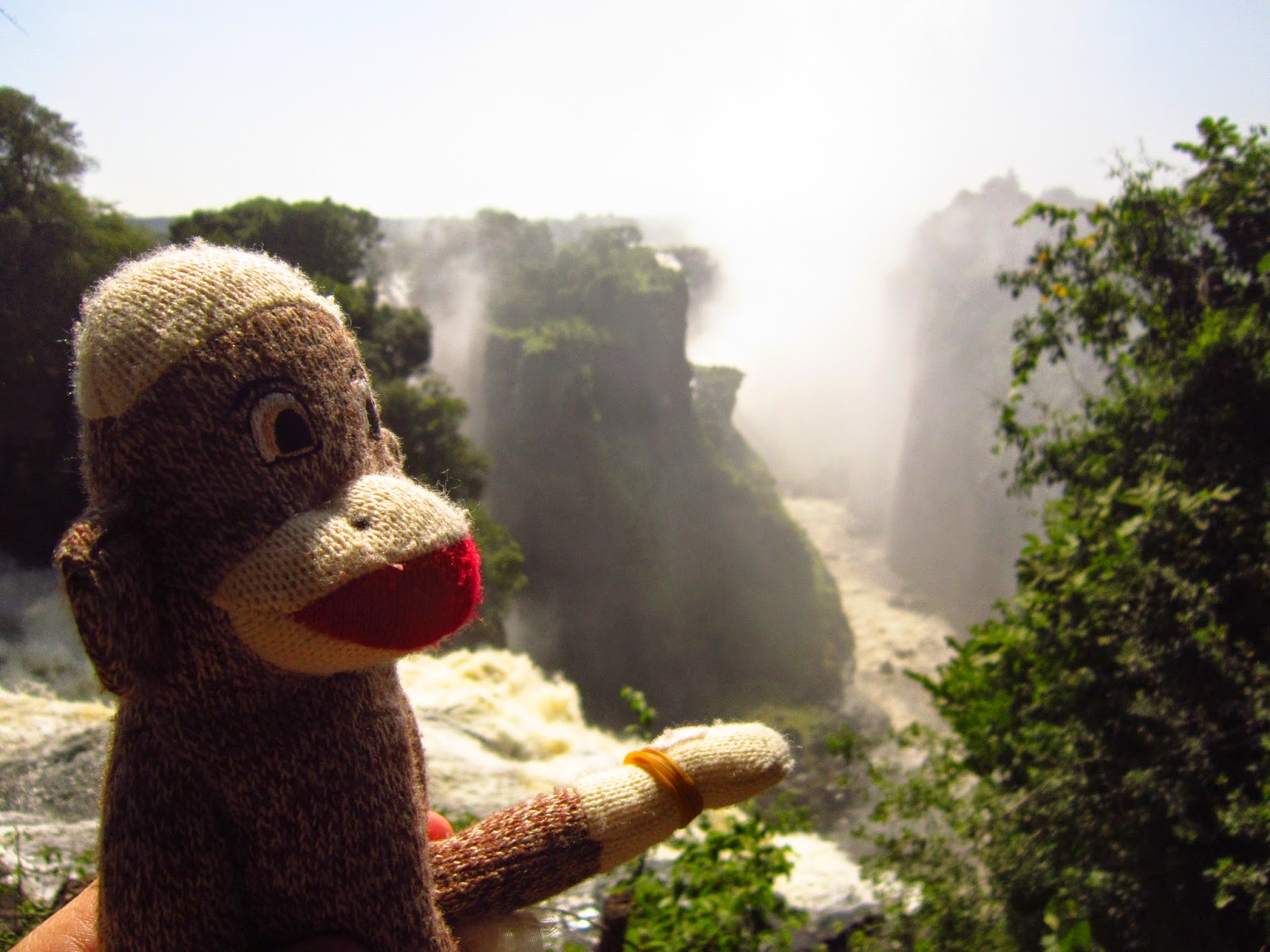 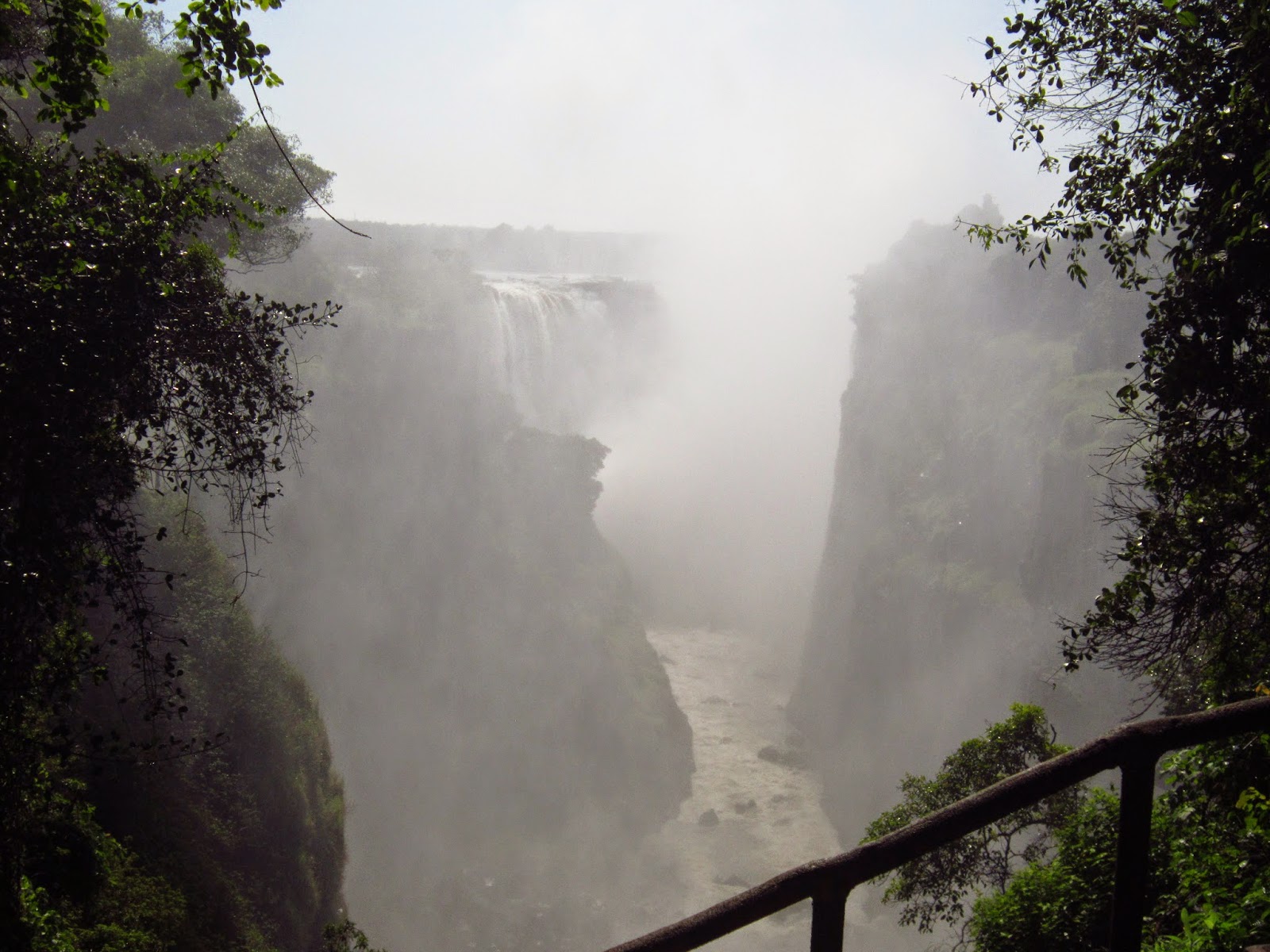 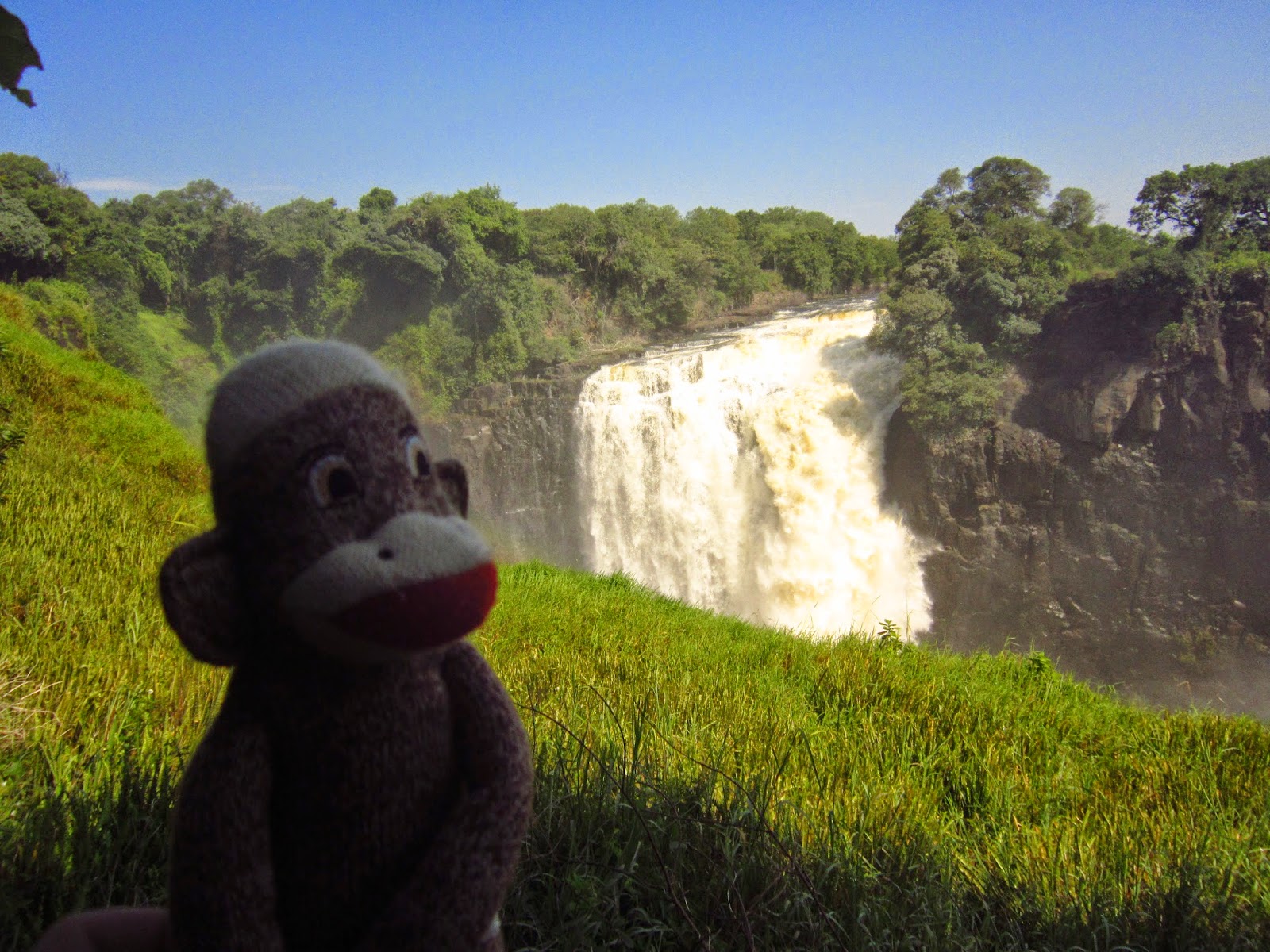 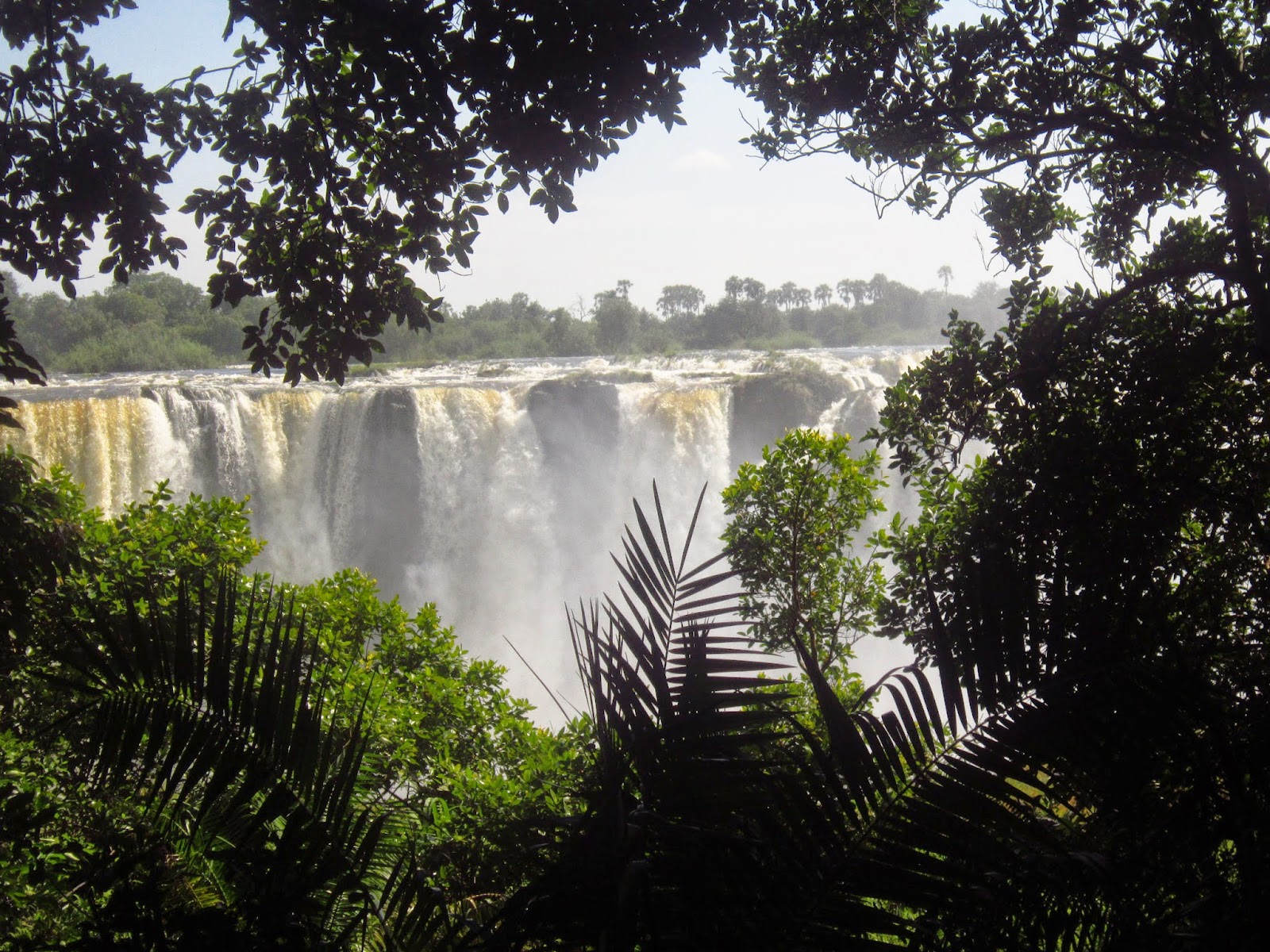 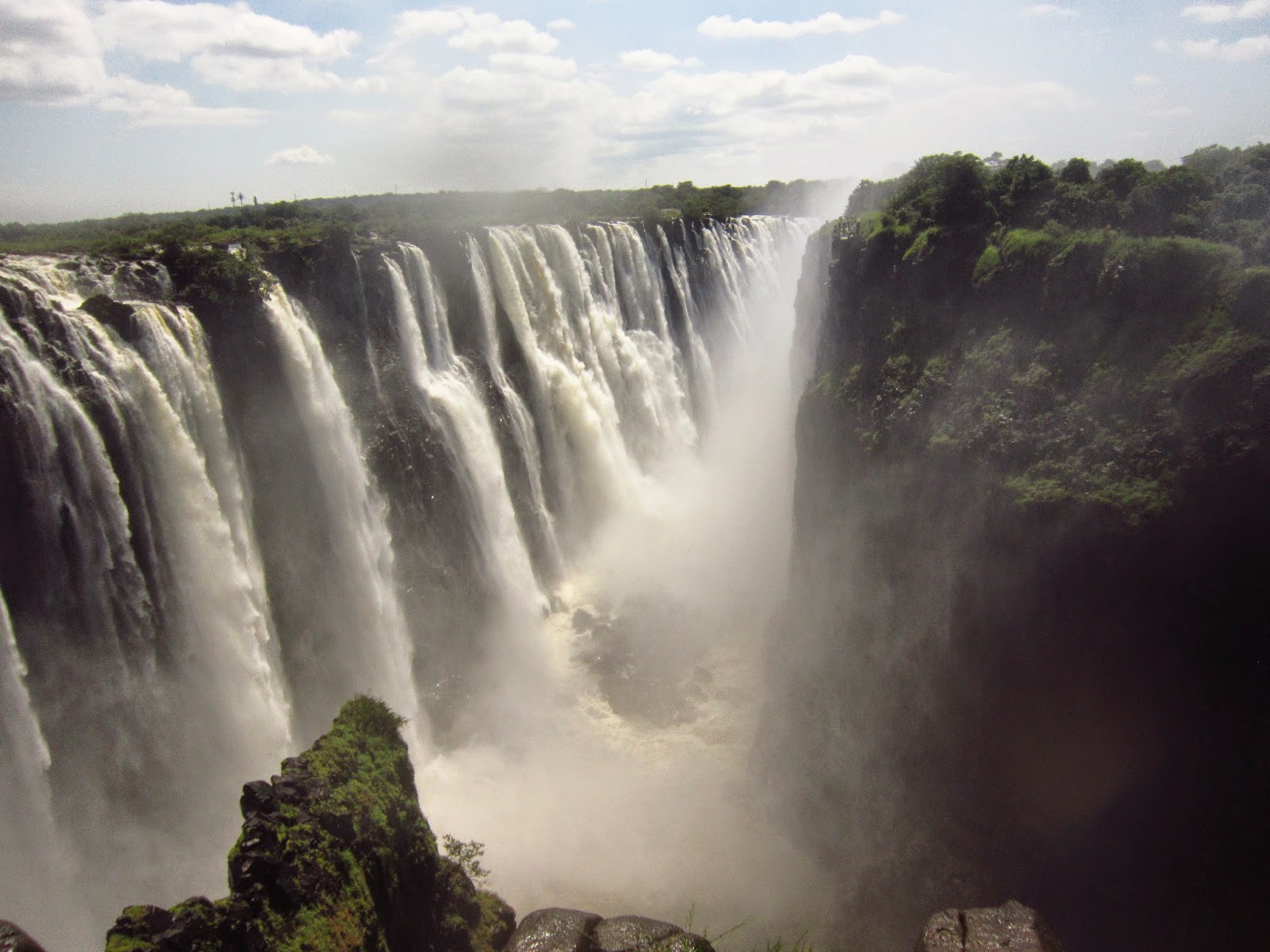 That afternoon, Paarth and I got to participate in an elephant-back safari. It was a short, 45-minute affair, but we got to ride on elephants through the bush, watching impala, warthogs, and a plethora of birds. The elephants seemed well treated, and the drivers were great guides to the area through which we trekked. 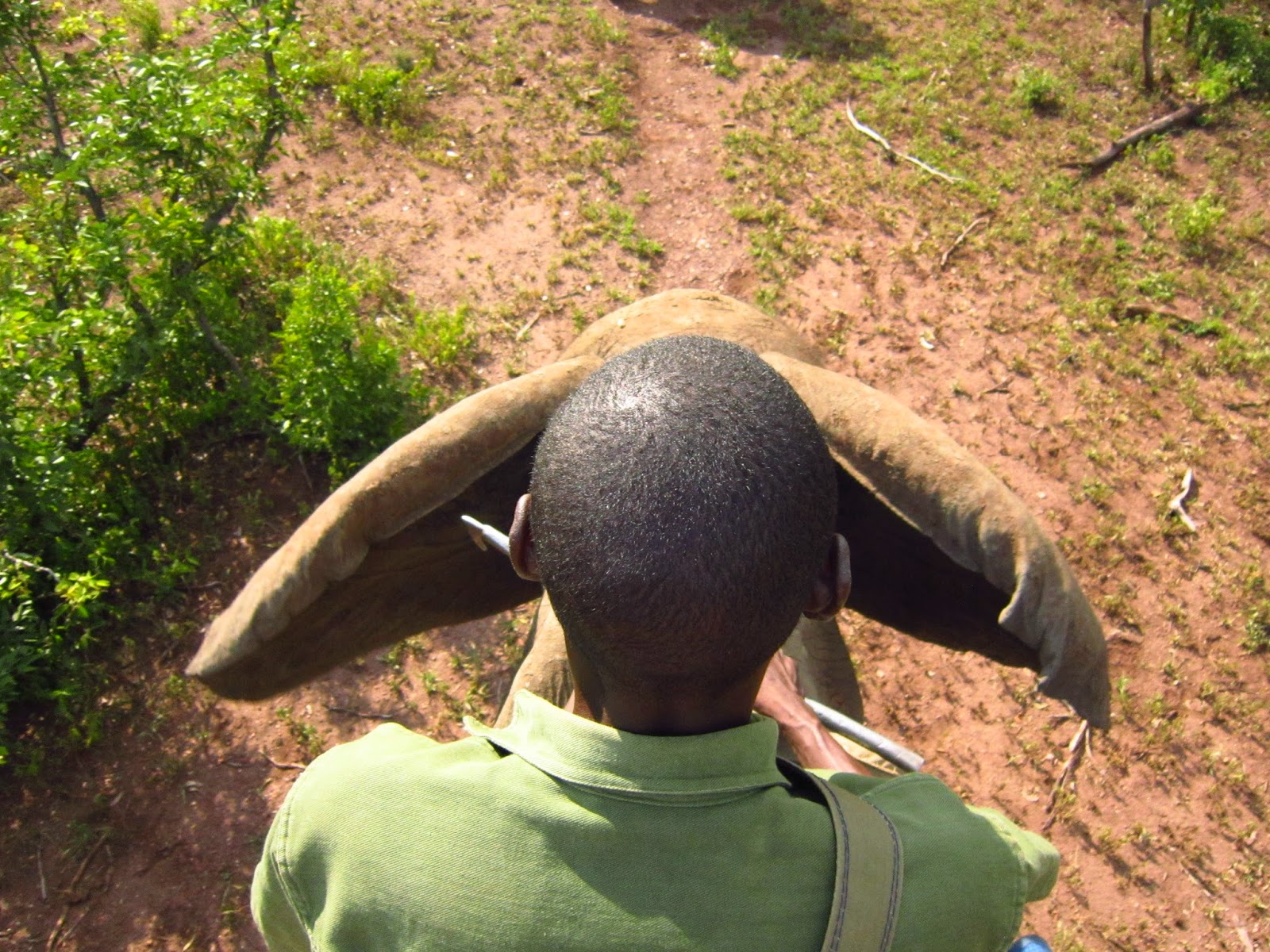 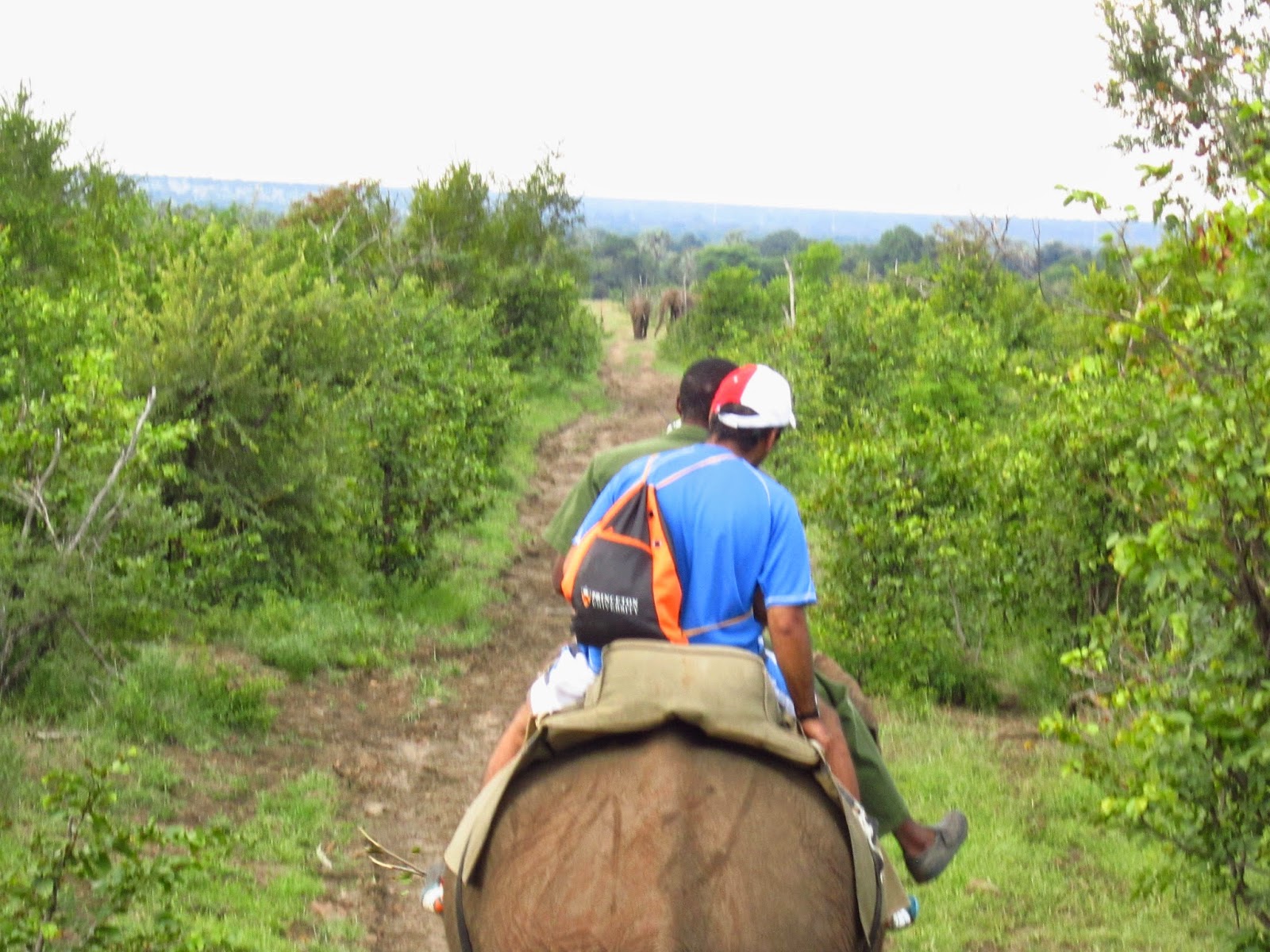 We treated ourselves to a meal of vegetable curry and sadza (a thick cornmeal porridge) at a local restaurant. Then off to bed.

The next morning, we loaded into a car destined for Botswana and a day-safari in Chobe National Park. The car, which could only take us to the border, was driven by a man named Innocent (the English names in Zimbabwe are fantastic: Innocent, Blessing, Trust, Marvel...) who gave us a talk on the state of affairs in Zim. Once the breadbasket of the African continent, under the extended rule of Mugabe, the nation has languored. The economy collapsed some years ago, and following massive inflation (the men trying to sell us the ten billion Zimbabwean Dollar note should give a bit of a clue), the nation scrapped its currency and adopted the US Dollar. This has been difficult on the mostly unemployed populace of the country. While it still has a decent infrastructure, Zimbabwe struggles with its political isolation and economic stagnation. It is a real shame. The country is a beautiful place with 15% of its land dedicated to national parks and some of the friendliest people I have ever come across.

Anyways, on to the nature. Following the matters of border crossing (exit stamp on the Zimbabwean visa, entry stamp to Botswana, vehicle trades across fences), we drove to Chobe National Park.

The first half of the day was spent on the Chobe River, in a small boat (in addition to Paarth and me, there was our guide, a couple from England, and an Australian couple from Israel). We were in the region in a delightfully sunny period of the wet season. Dry seasons are usually preferred for safari, as limited water drives animals to watering holes where they can be more easily viewed.

The river divides Namibia and Botswana. It was a beautiful day of tooling down the river and watching wild life. From our ride, we watched a variety of birds, impala, monitor lizards, crocodiles, hippos, baboons, and a shit-ton of elephants. Recently, Botswana installed a moratorium on hunting elephants, resulting in a population boom. A cool byproduct of this abundance was that we could witness a lot of social behaviours. It became almost boring to see elephants. Their interactions with each other then stood out. 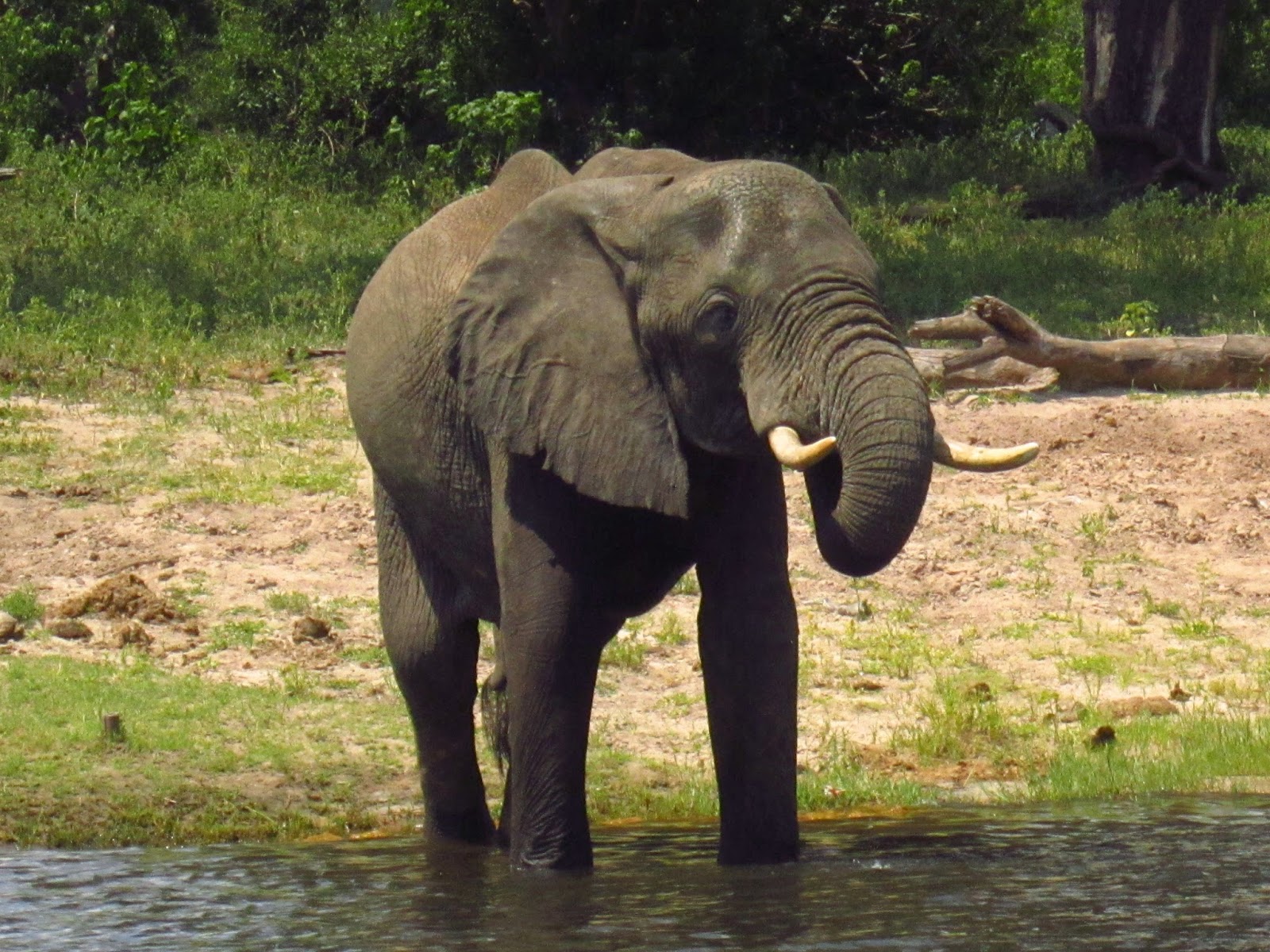 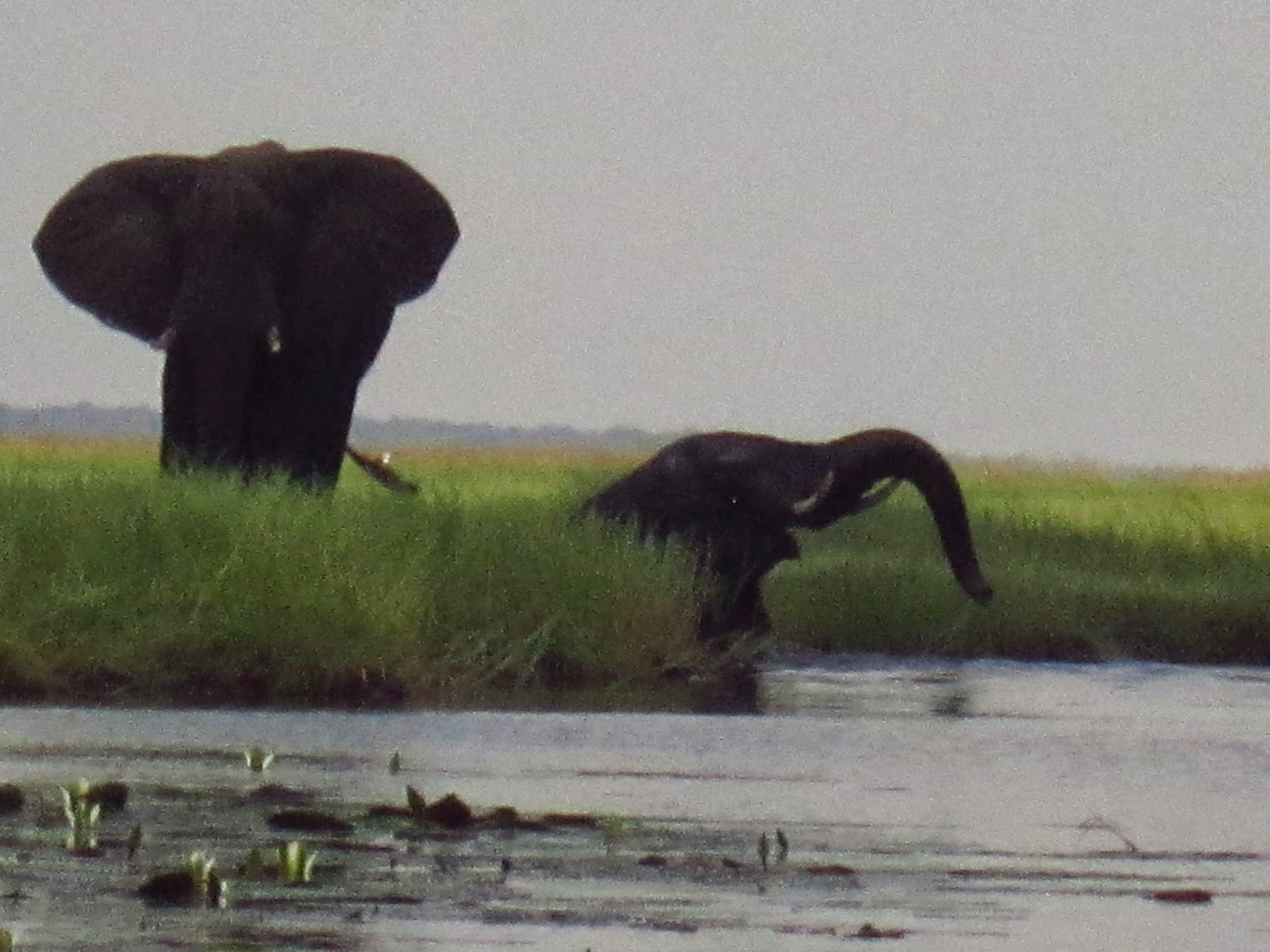 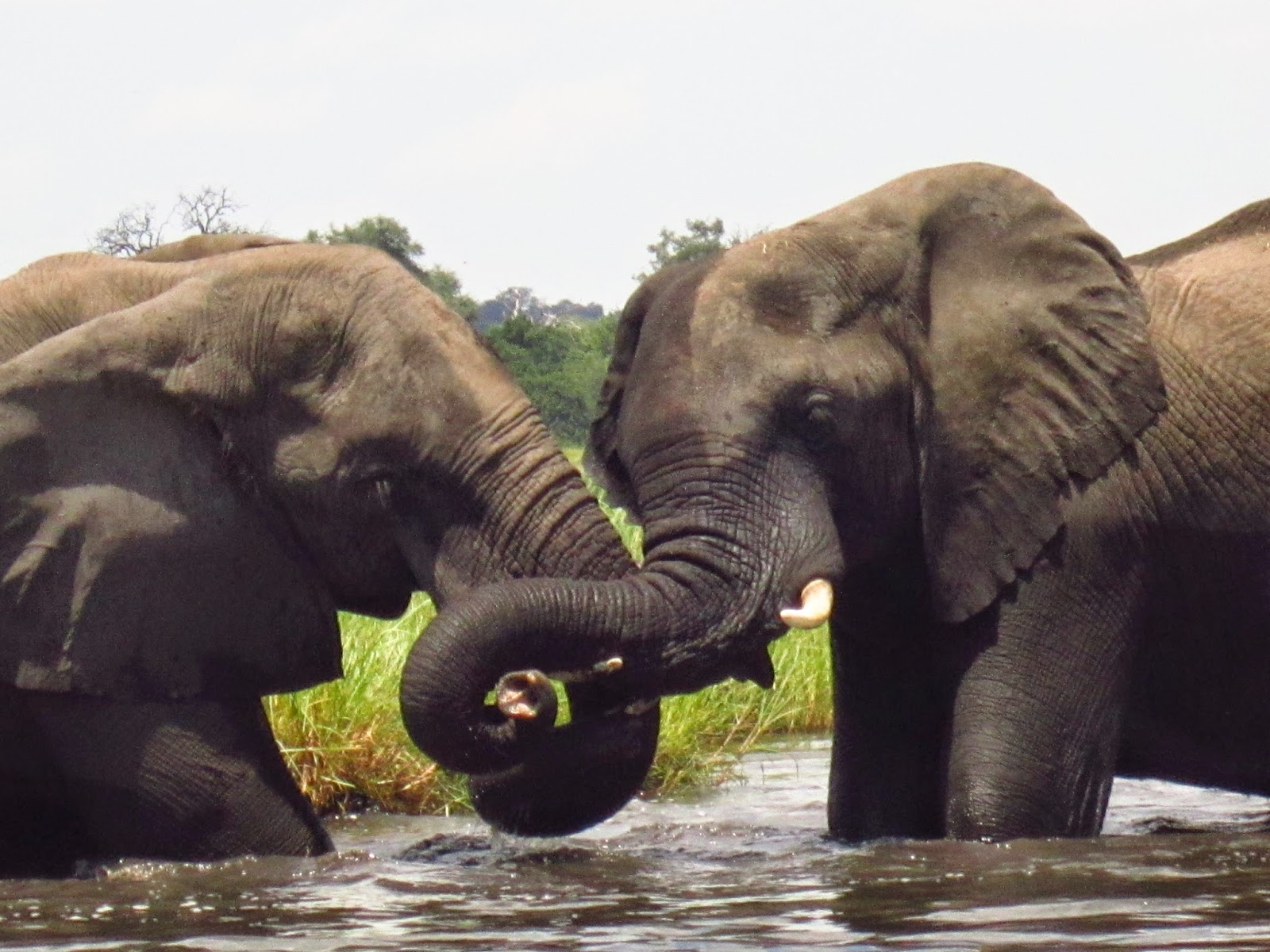 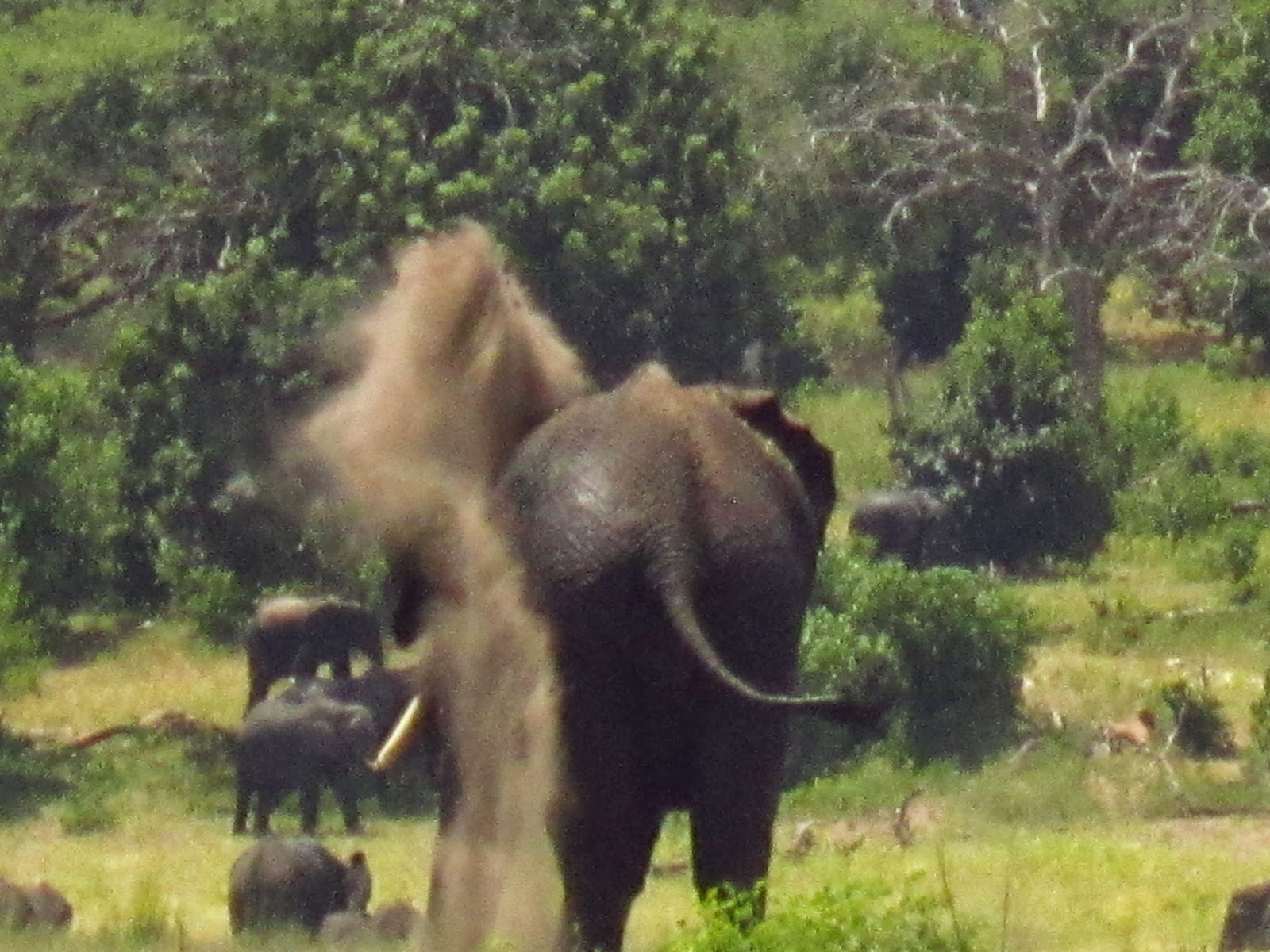 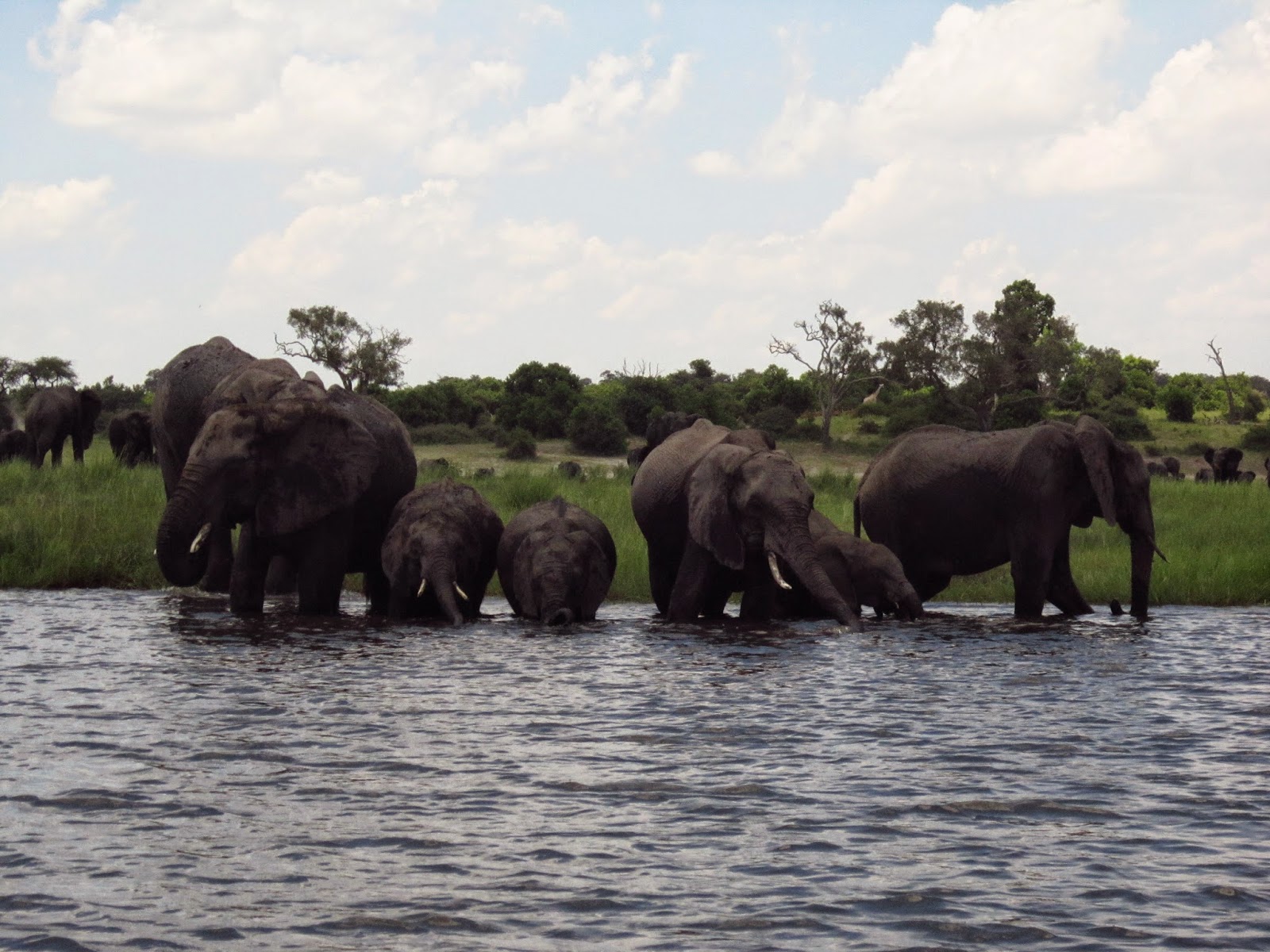 After lunch, we loaded into a jeep and then took a game drive through the park. In addition to what we had already seen, our group spotted buffalo, sable antelope, puku, warthog, giraffe, and zebra. Of course, my camera battery died part way through this day trip. Still, I got some decent shots. 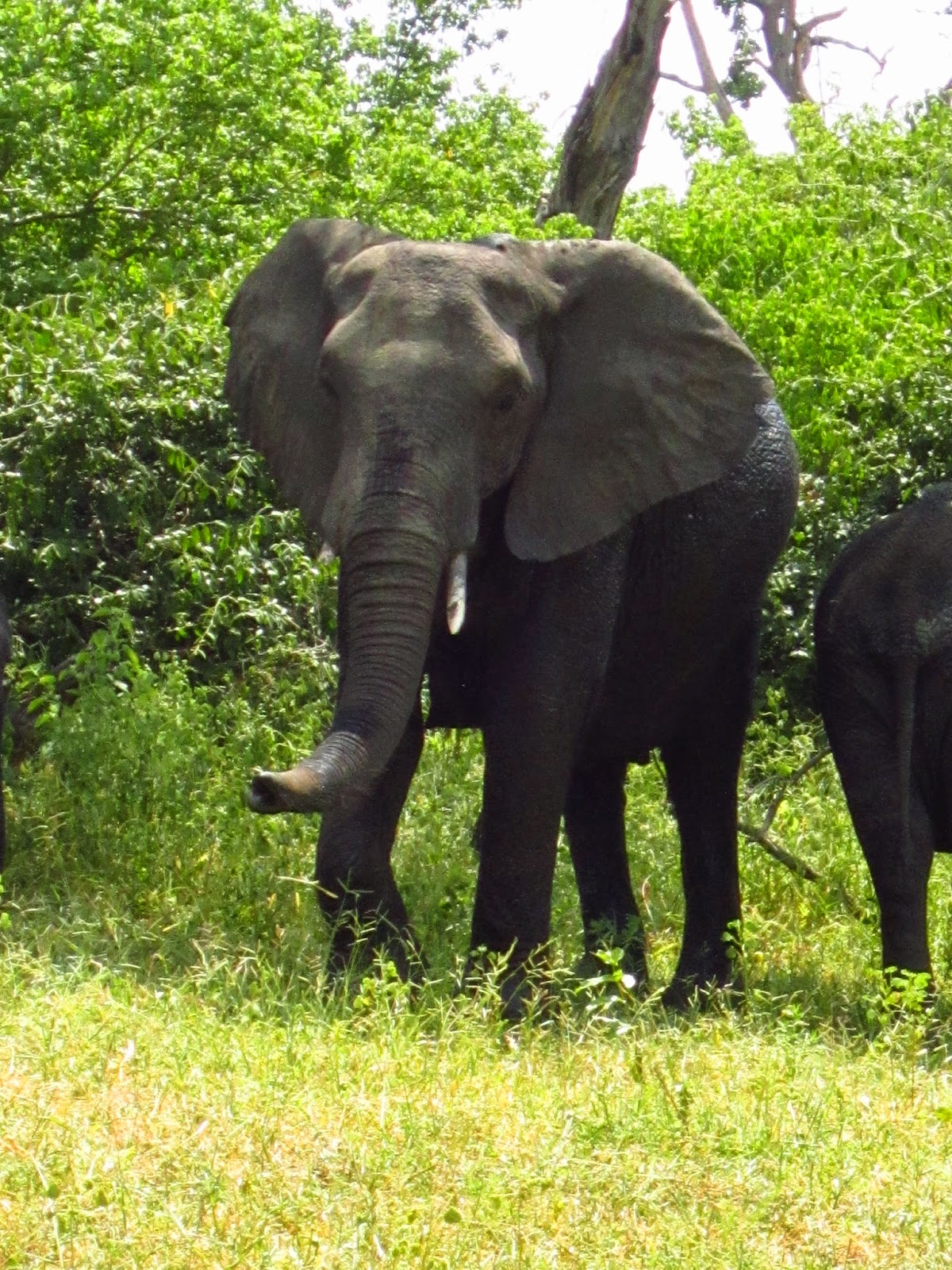 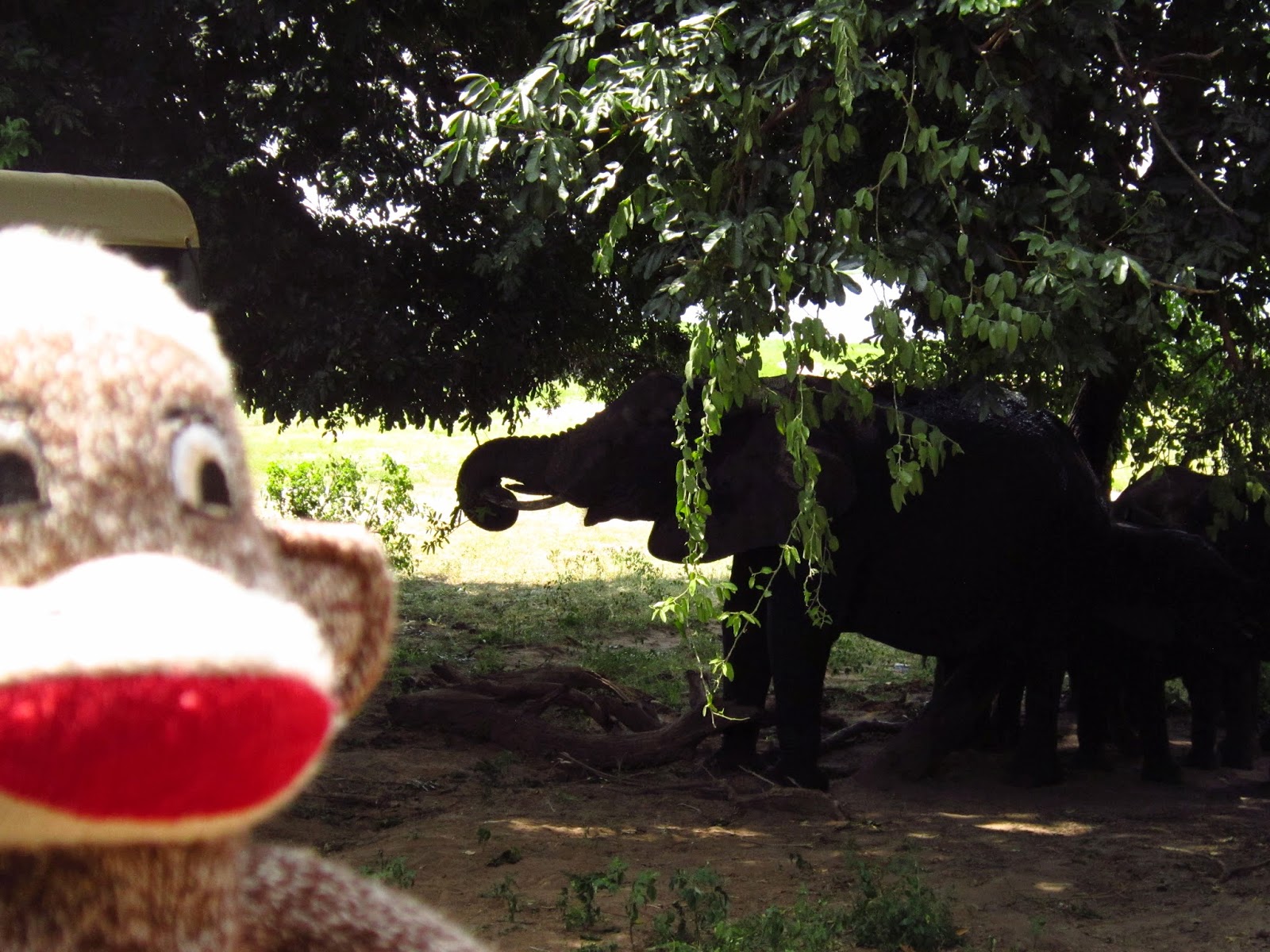 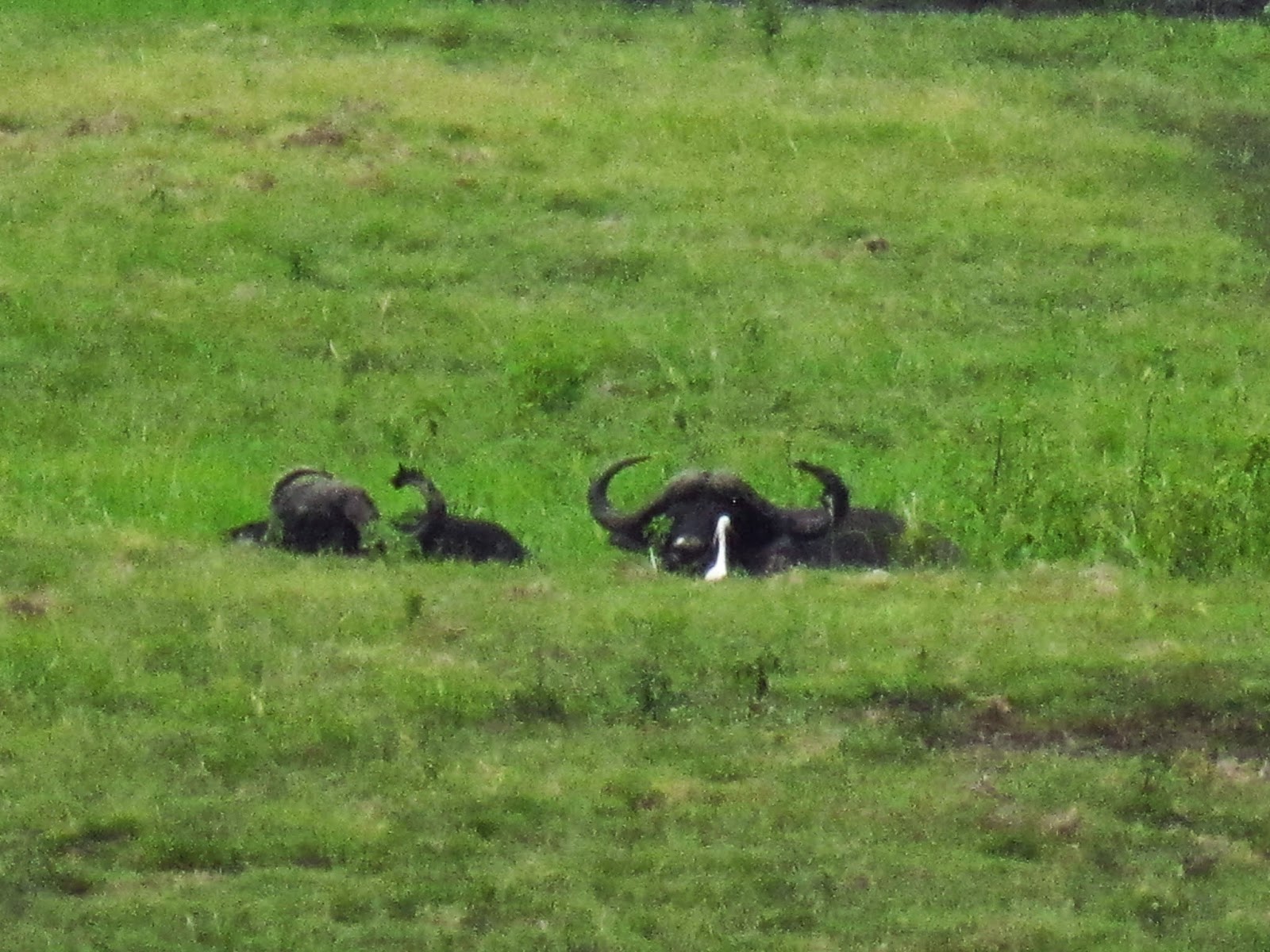 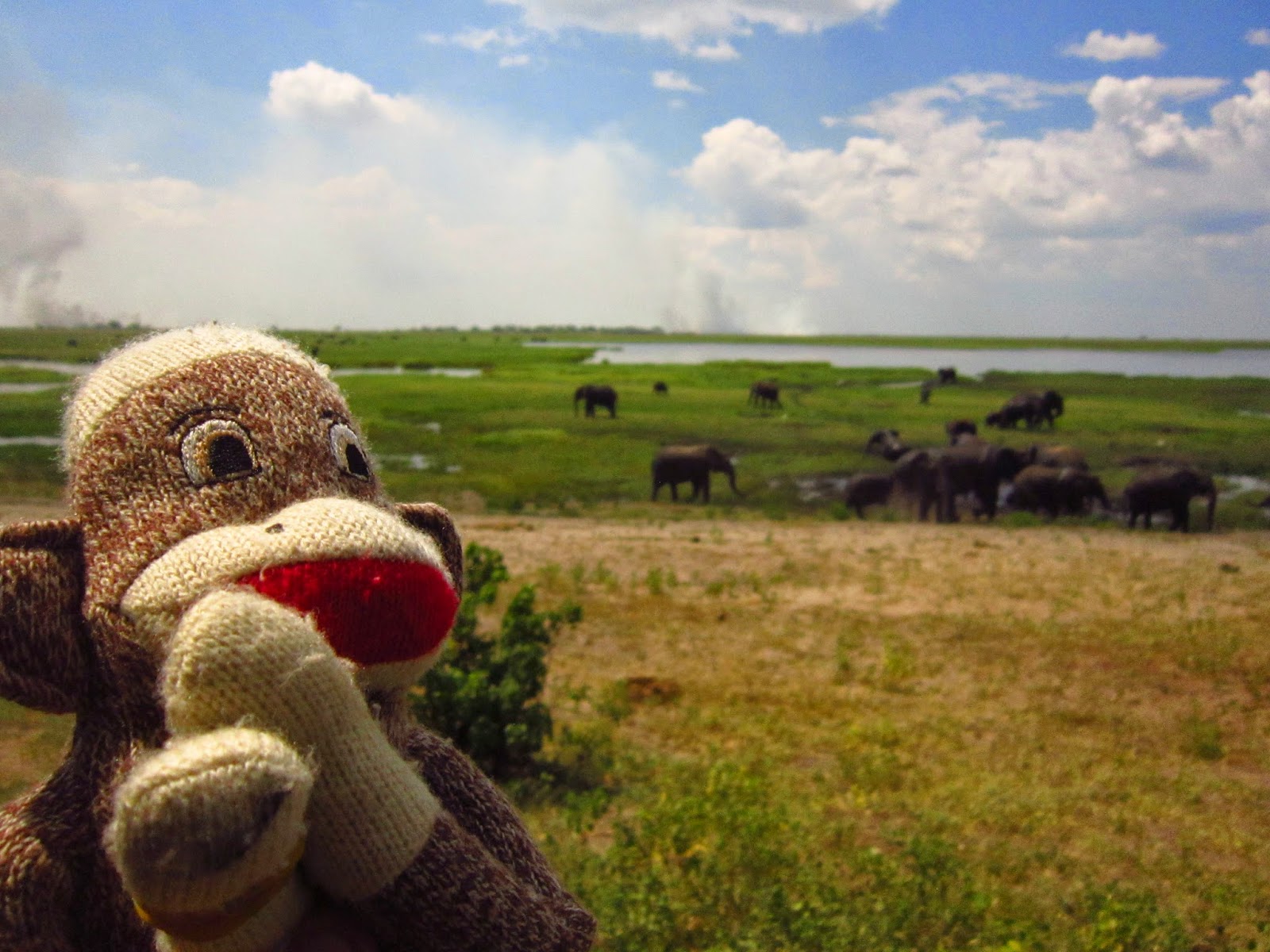 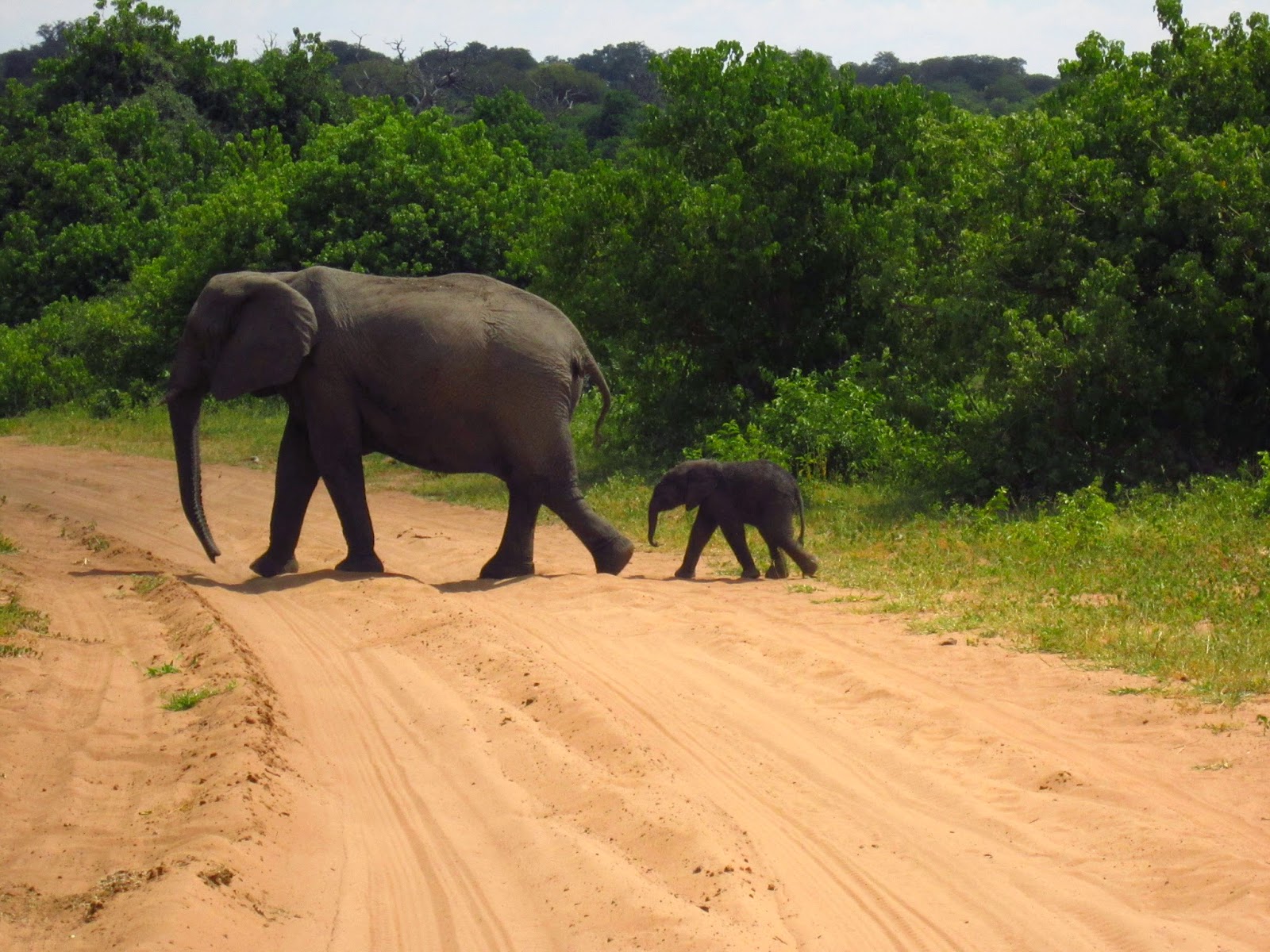 Our return included some small shopping at the open air craft mart. They are aggressive salesmen. I kept trying to find individual items (in the midst of the items that every single craftsman in the area appears to produce). Some small stone sculptures caught my eye. The key in Zimbabwe is that everything is negotiable. They are willing to barter for more than just money. I actually obtained one piece in exchange for one of my earrings. Another piece was procured for some AAA batteries. One man was after my belt, but backed off when I explained that my pants would literally fall off me in such a deal. They were peculiarly interested in pens, and one man tried to barter for Monkey (no deal).

Our following day was our last day. We woke up early so that Paarth could do the same walk through the park that I did on the first day. It was another amazing day of Victoria Falls. 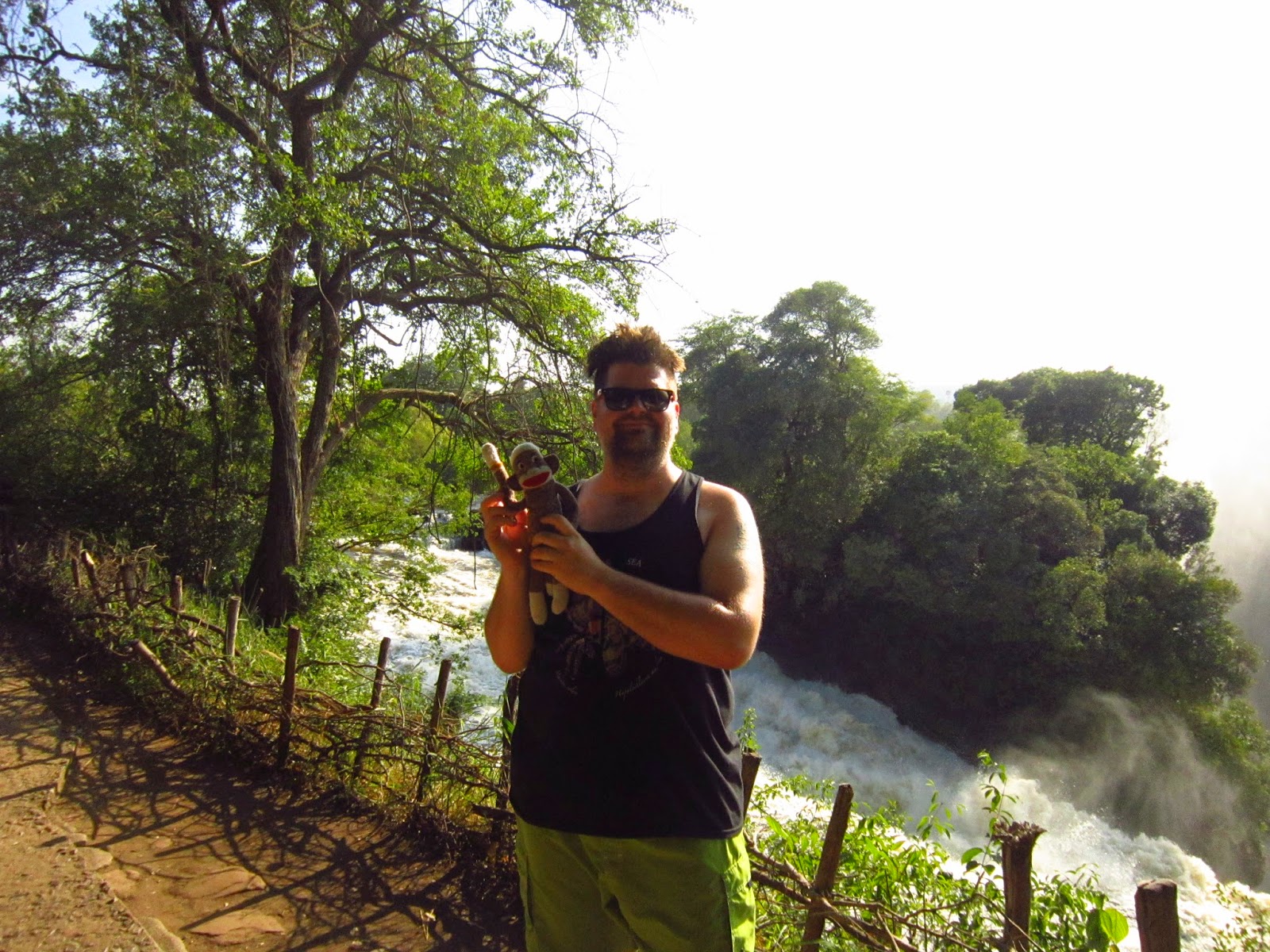 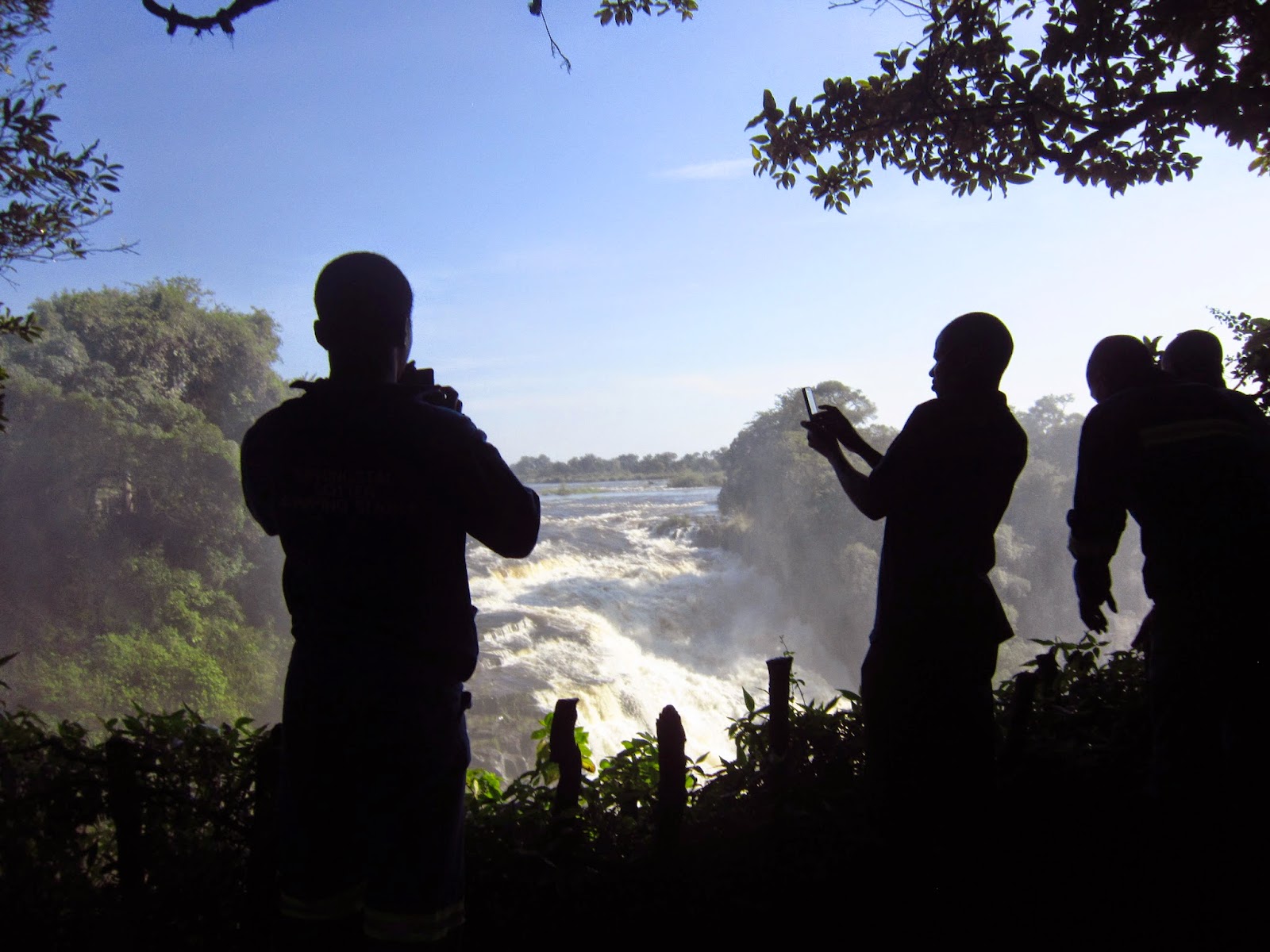 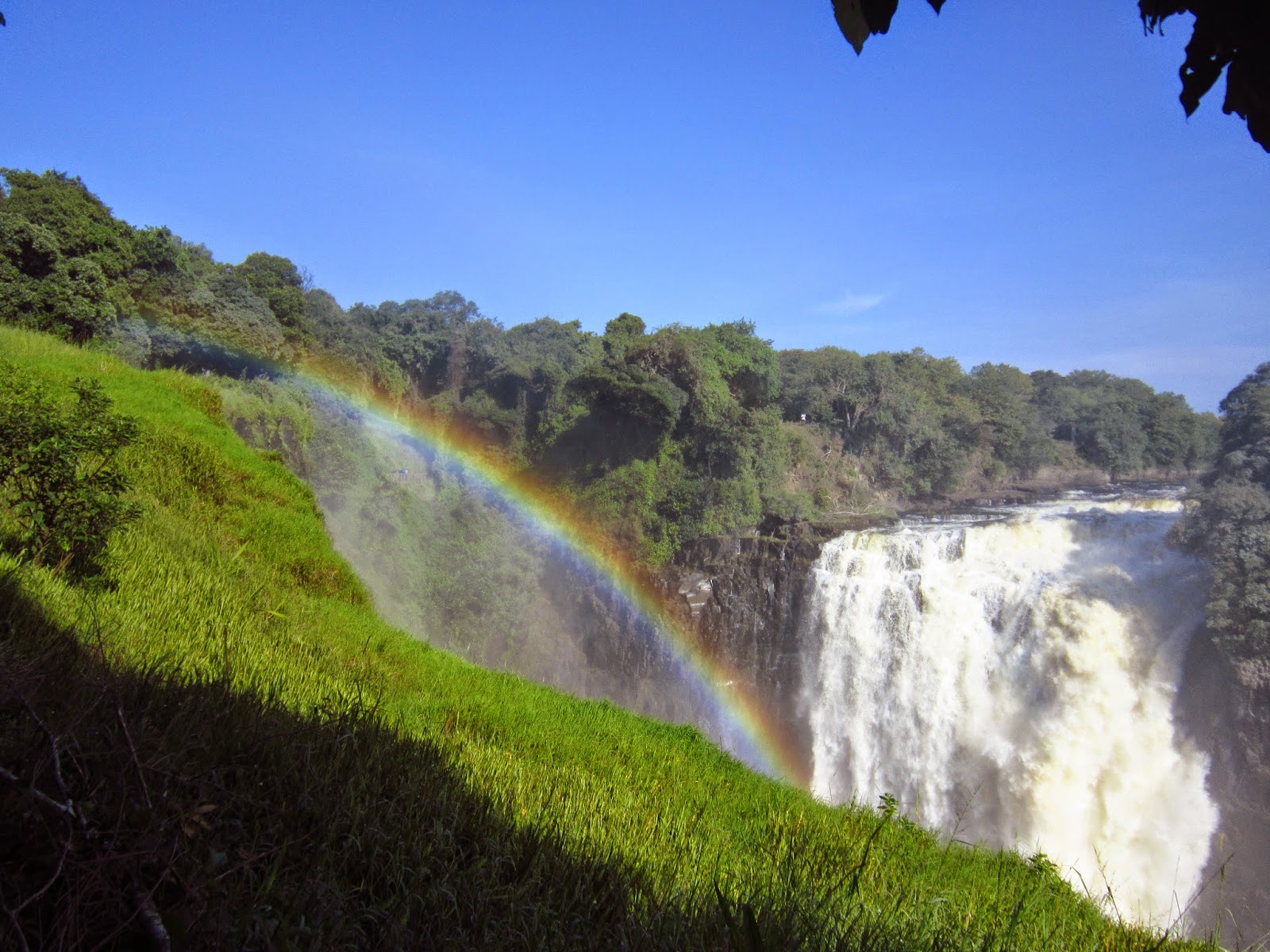 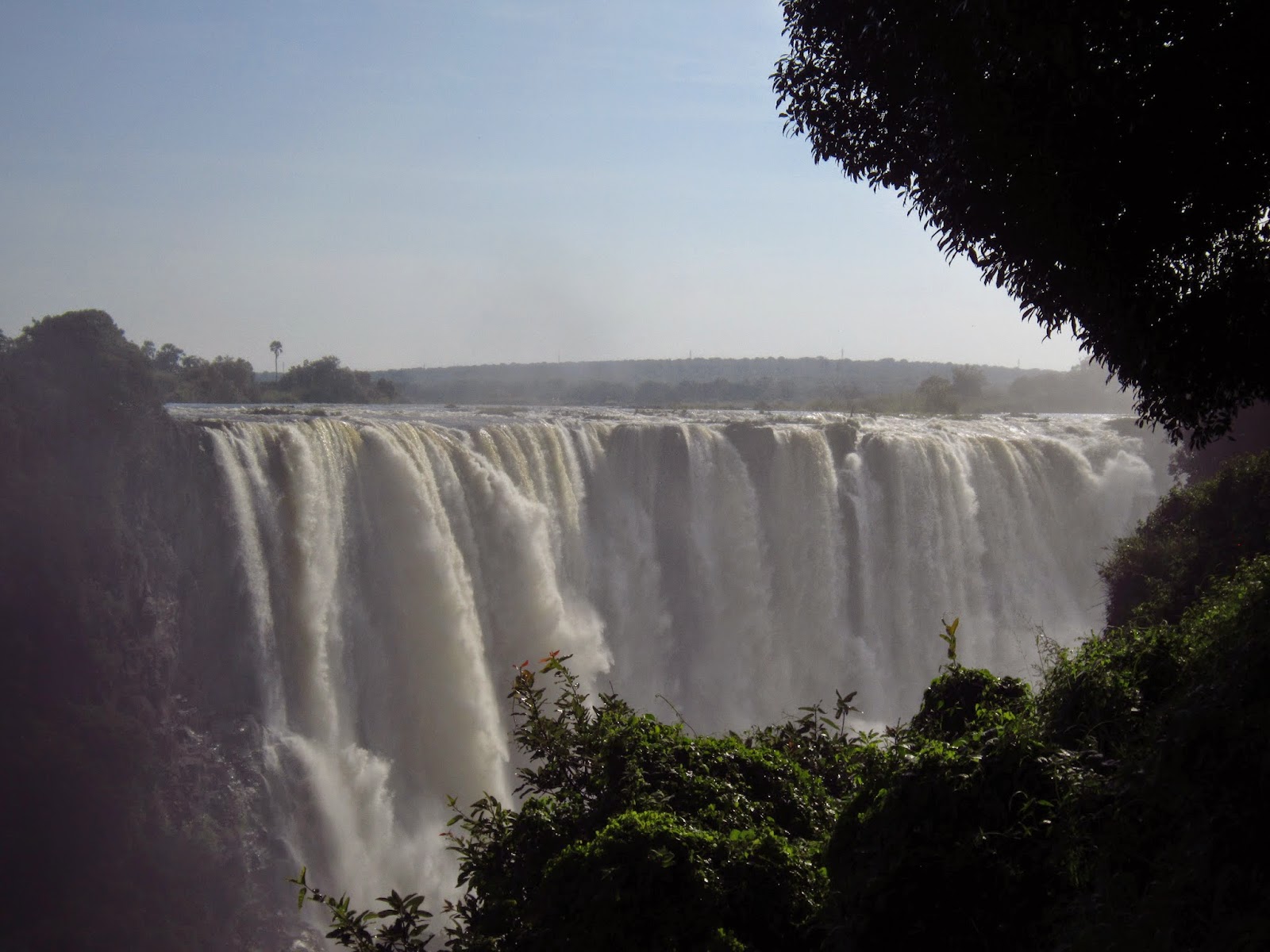 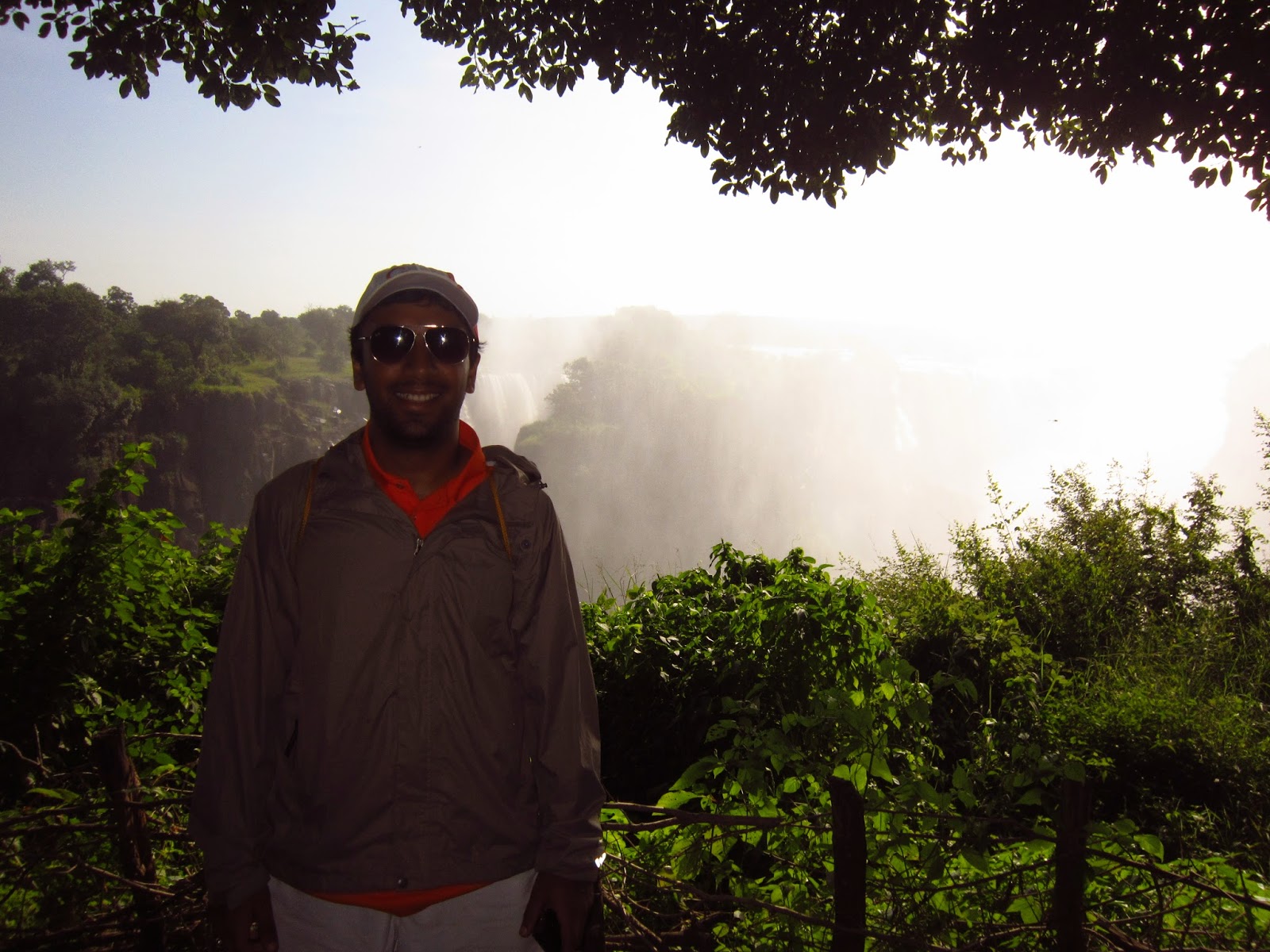 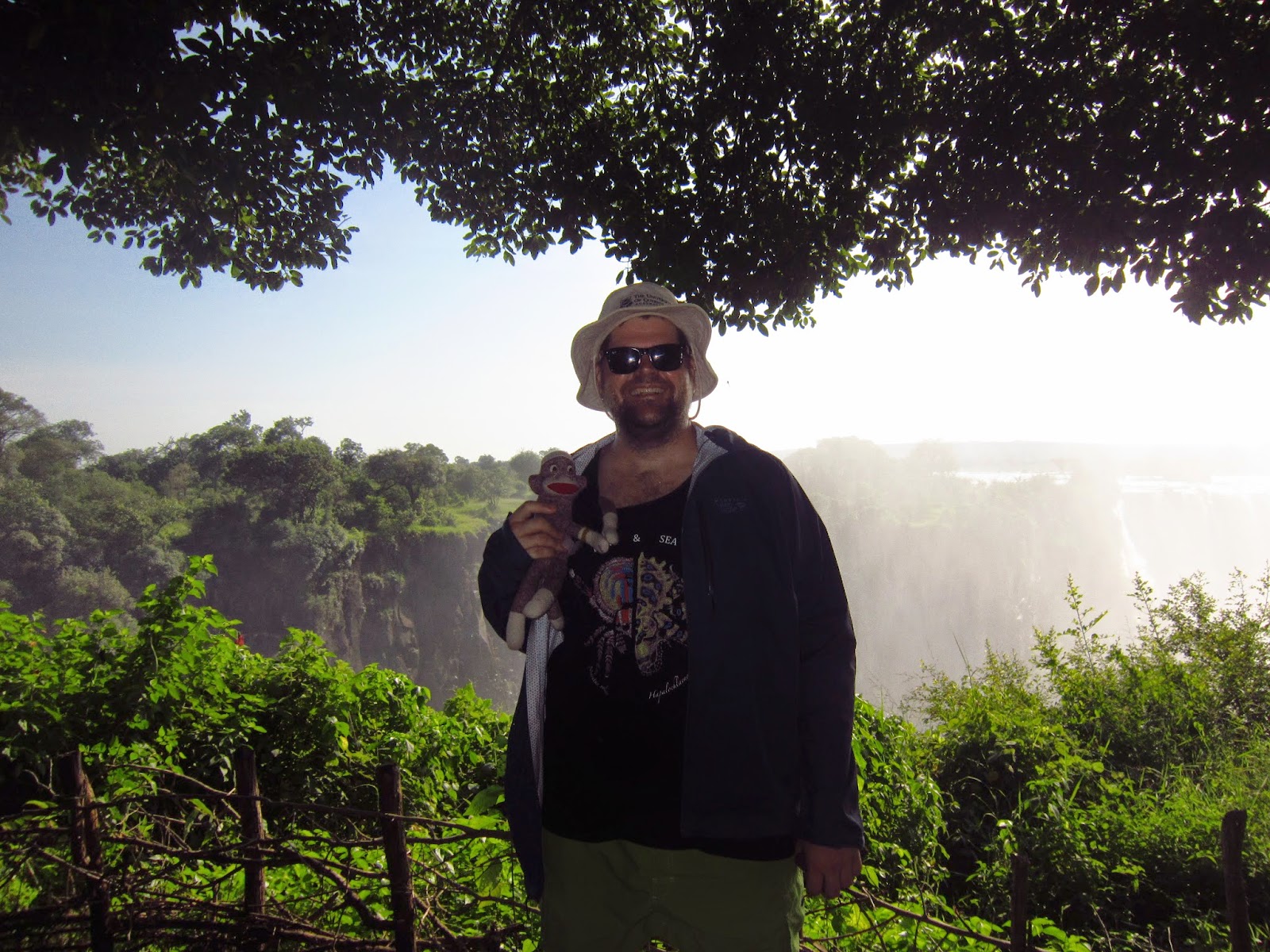 We returned to the backpackers to shower and change. We had a few hours to kill and mostly hung around town before it was time for our transfer back to the airport.

When I lived in Guam, there was this expression "OOG" which stood for "Only On Guam." It was always a flippant comment made to humour oneself in the face of frustration due to the lackadaisical and often bemusing state of customer service, efficiency, bureaucracy, etc. on the island. Paarth and I wondered if there was some similar expression in common usage here. While most everyone is lovely, Africa time is a very real thing and customer service is not always efficient or warm. If there is not, we propose "Ahhhh, Africa!" in response to the slow and often frustrating state of affairs in whatever petty inconvenience we westerners find ourselves.

For example, the check-in for our flight out of Zimbabwe was driving many of the other passengers mad. The woman who finally opened the check-in counter after a large line had formed slowly and sullenly took care of producing boarding passes. The fun part...it is the first time in my life I have received a hand-written boarding pass.

We returned home late. The next day consisted of the delights of course registration at UCT. More on that later.