When hitting the deck beats missing it...

May 10, 2015
Just last weekend, my Marine Ecosystems class took a field trip to Soetwater outside Kommetjie (fun Afrikaans names that most of you will likely have fun misprounouncing). This was not the blindingly brilliant state-of-art research facilities I encountered through the University of Queensland last year. In fact, this facility was not directly related to the University of Cape Town at all. Rather, it appears to be a private, or semi-private educational retreat-type facility on the west coast of the Cape. It was a quaint little place that provided our basic needs.

Our class was split into three teams that would cycle through the research projects hosted by each of our lecturers over the three days of the field trip. I am reminded of Ian Tibbetts last semester saying "I don't do structure, I do science."

I have to admit that I learned more of my classmates names over that weekend than I had in the preceding bulk of the semester. It was nice to finally get acquainted, rather than sitting in lecture and then running off to my next lecture. As I mentioned before, many of them take a majority of their classes together and have been on this tract since the start of their university careers. So they were much more well-acquainted with each other (and knew the name of the American in the class).

The first afternoon arriving, people flocked down to the shore to watch the sunset and engage in an activity quite popular with South Africans (it seems) called "having a sundowner" which is another way of saying "having a drink as the sun dips below the horizon." A couple of us went out on the boulders of the exposed intertidal to look at a few tide pools. Others tossed the rugby ball around or played soccer.

I somehow ended up with a bunkhouse to myself. There appeared to be more mens bunks than womens, yet there are about half as many males as females in our class. Nobody liked the rather mildewy smell of the top bunkhouse that I went to and quickly sought out the others (which in my opinion had inferior quality matresses). So, I aired out my now massive and solitary accommodations and was quite content. Later, it would prove a blessing to all concerned that I was on my own.

As a forewarning, just about all the pictures I took over that weekend were on the first afternoon. 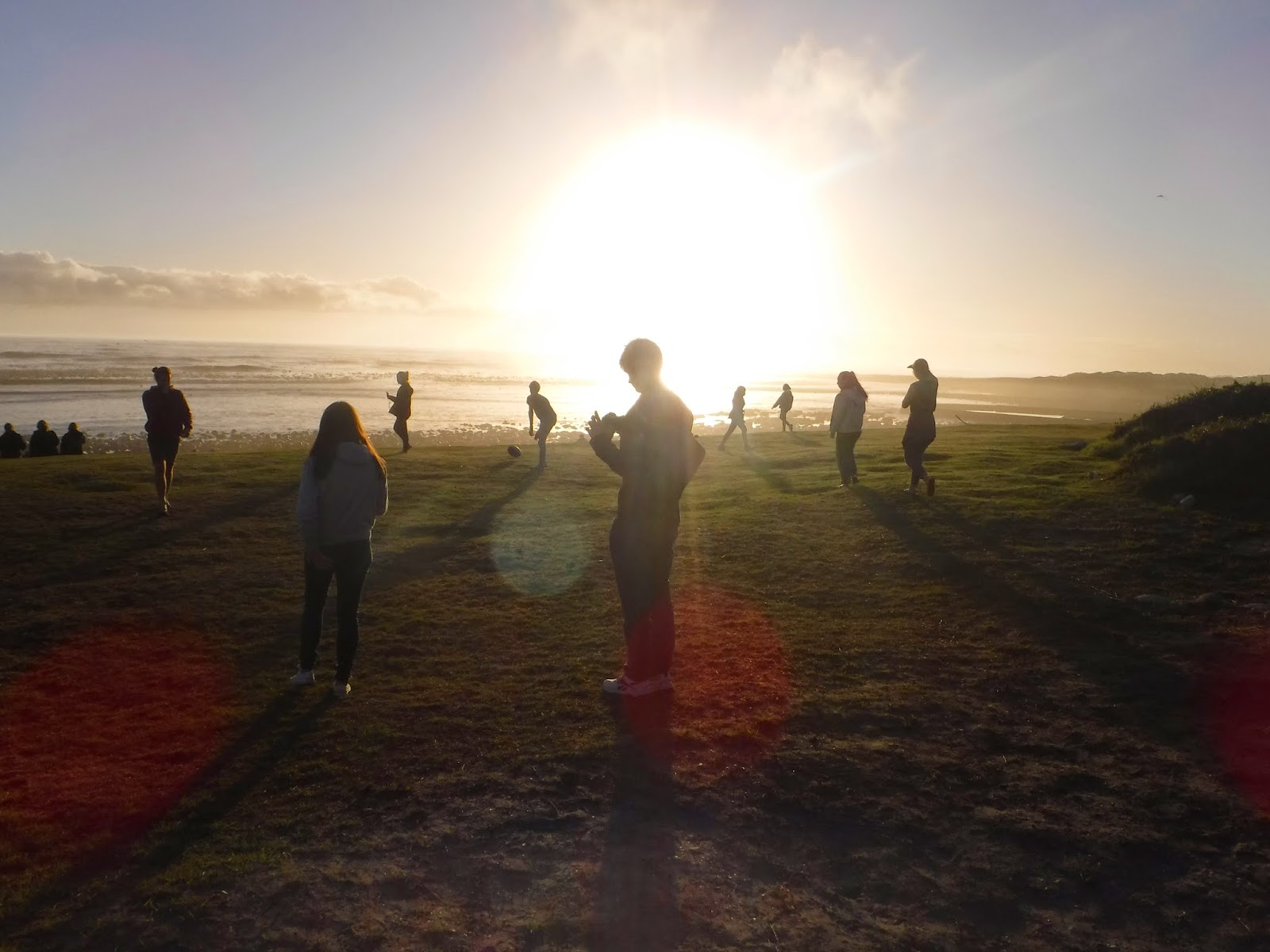 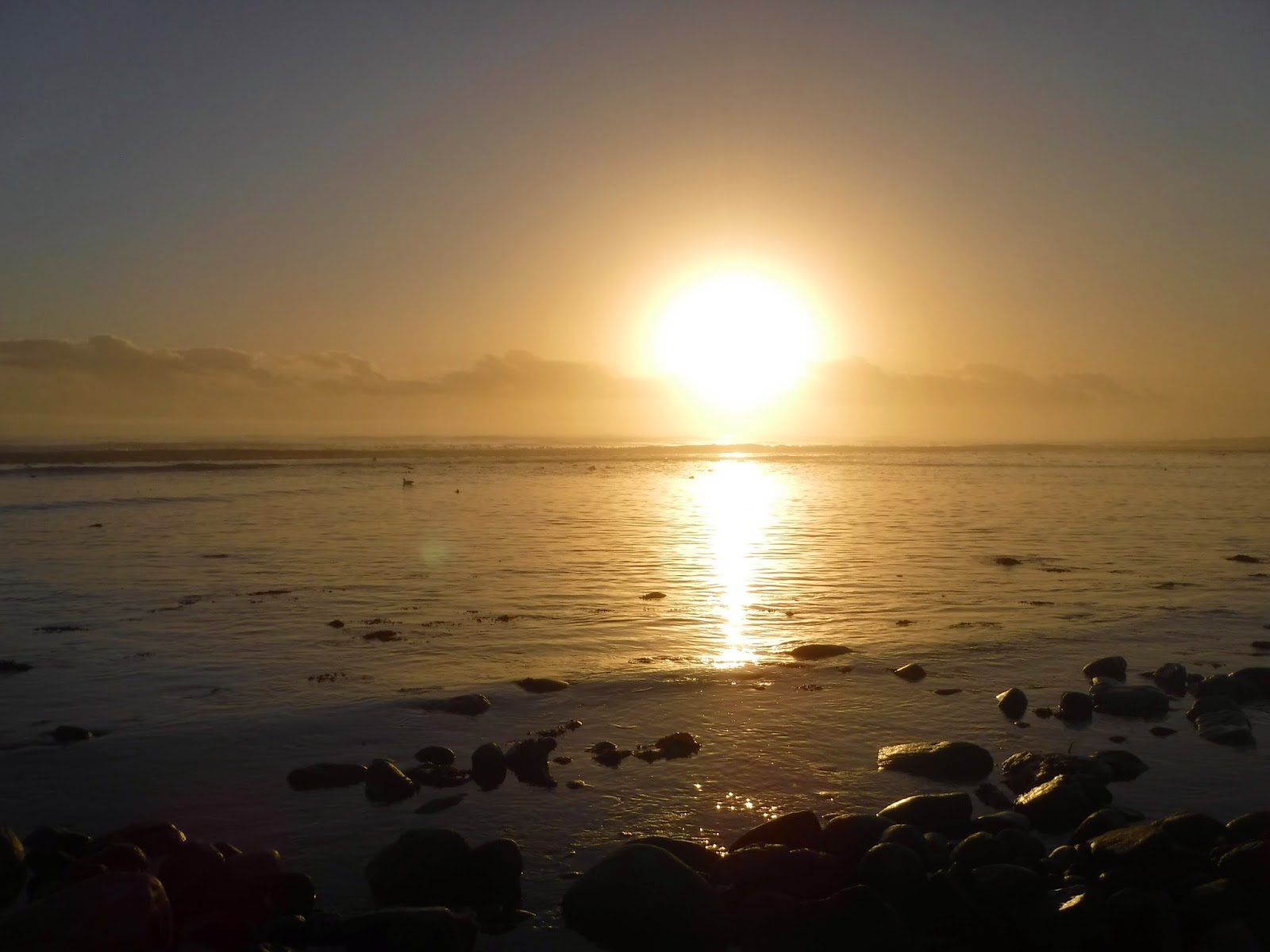 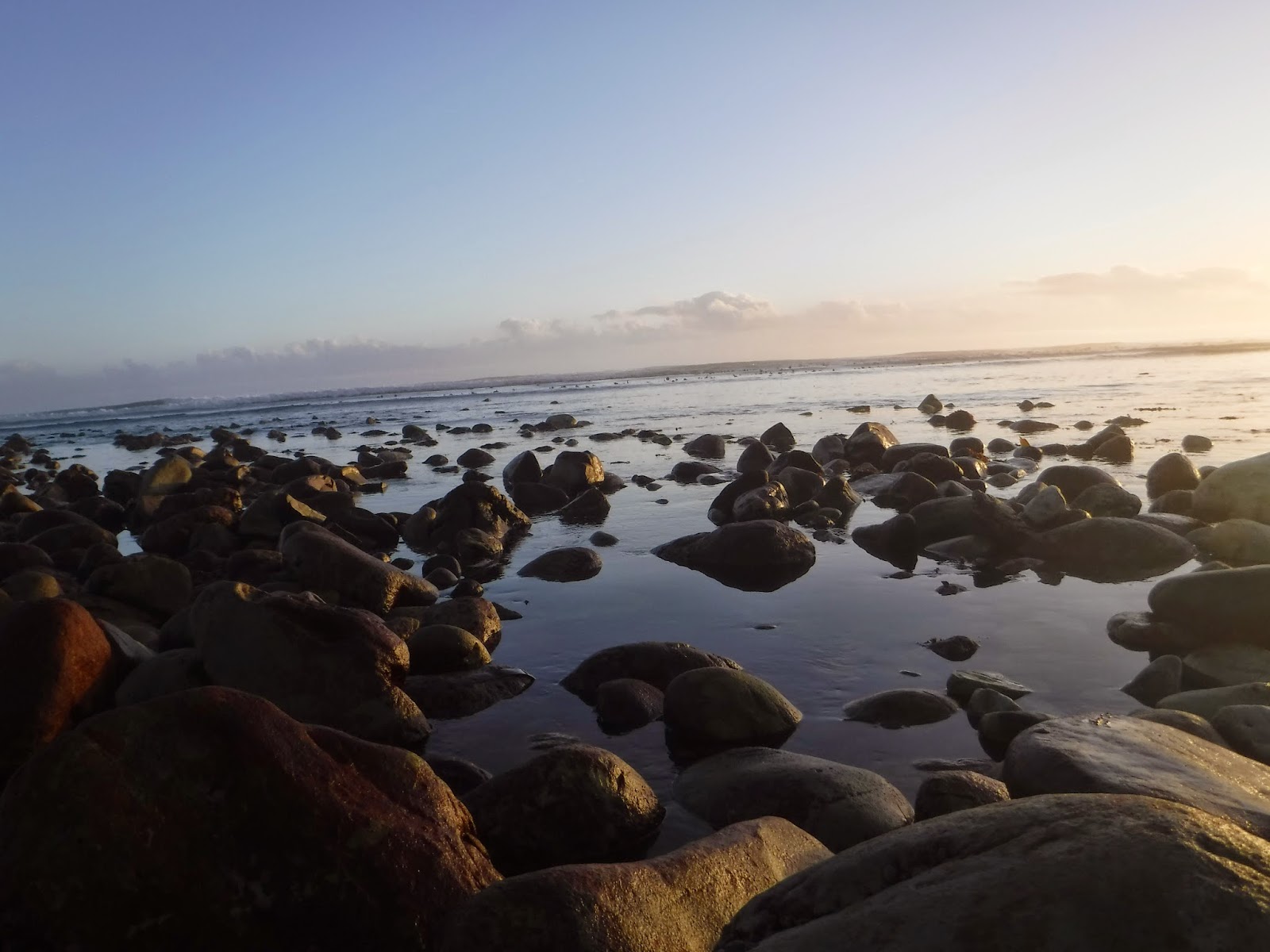 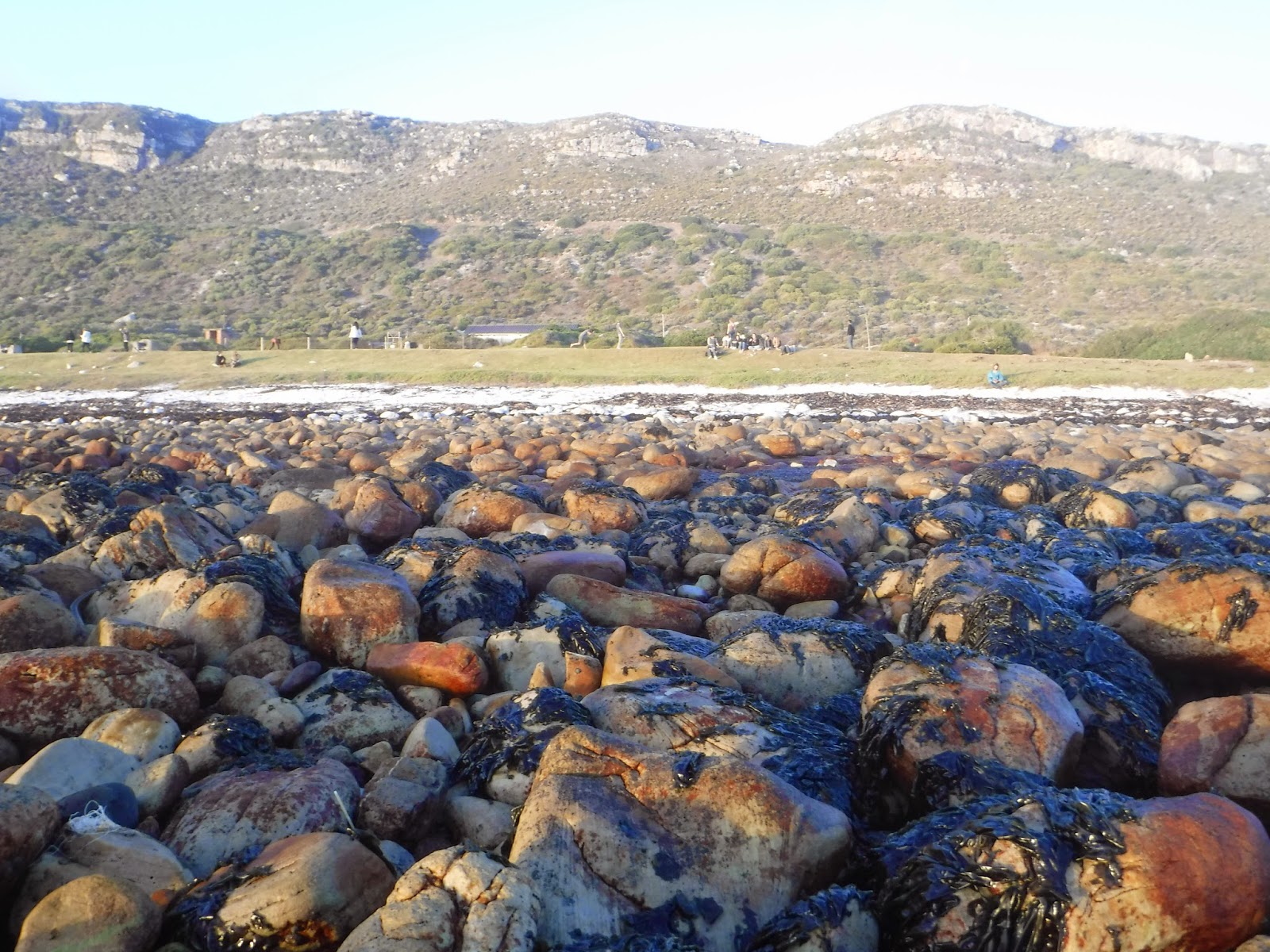 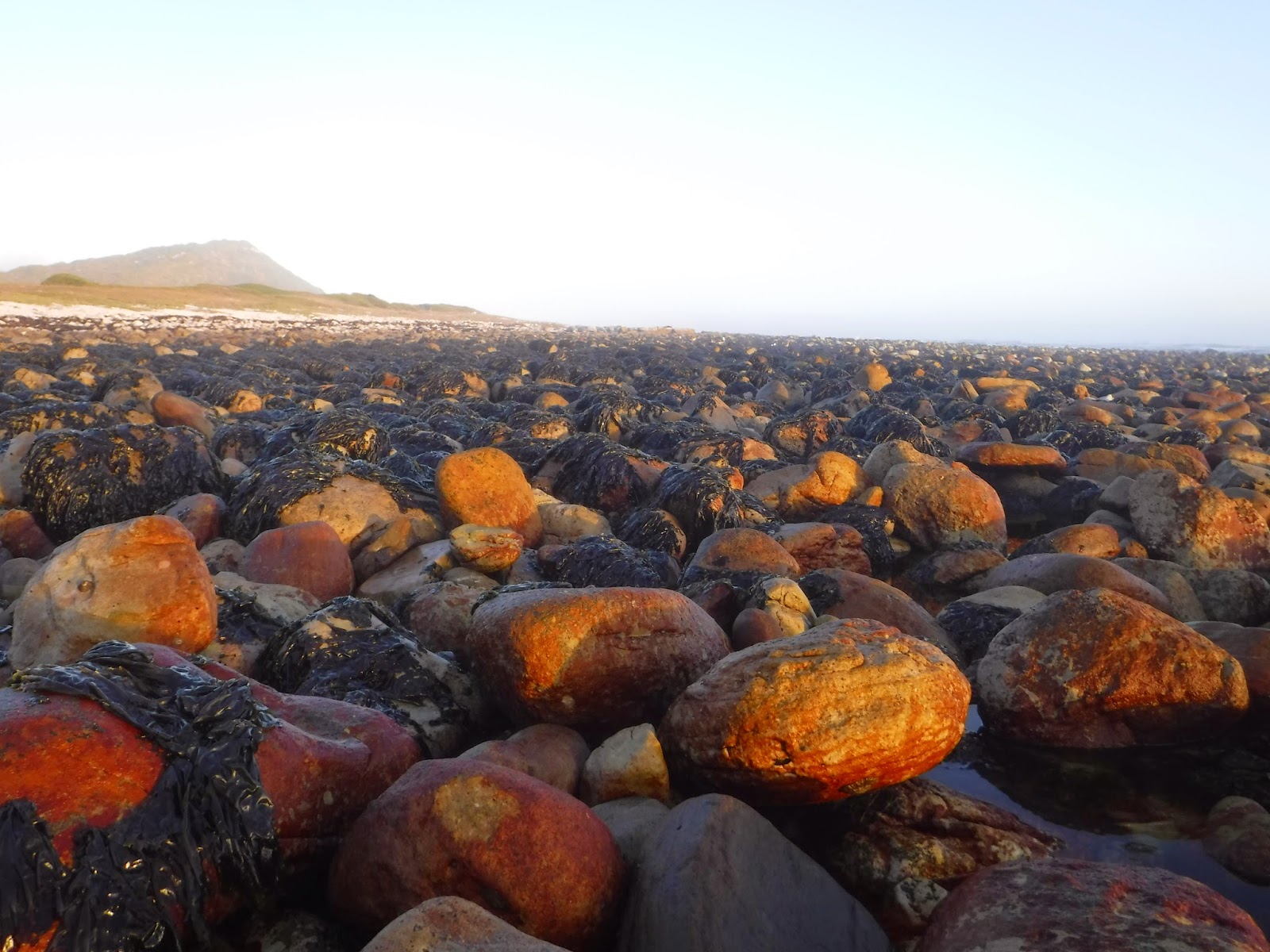 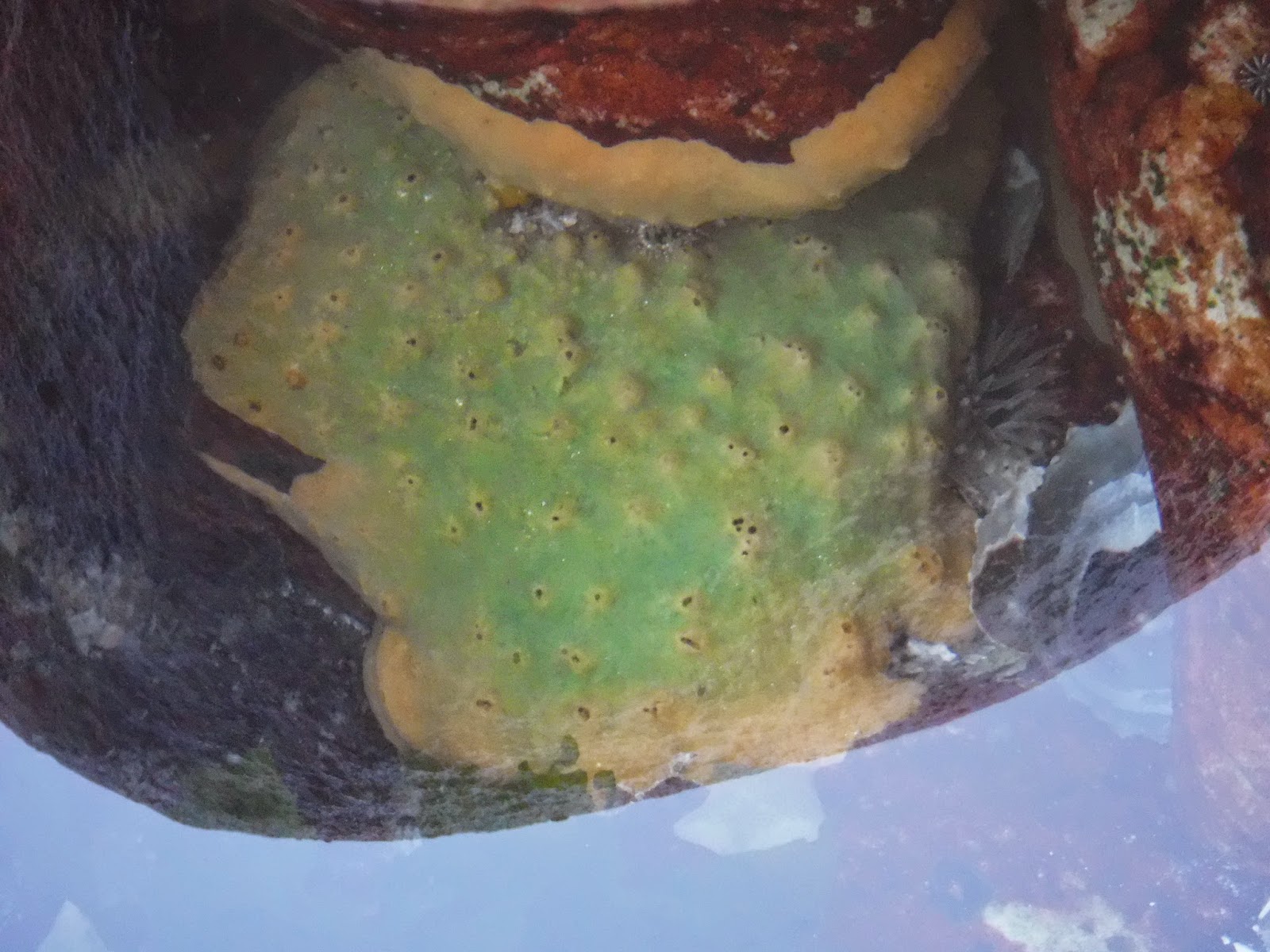 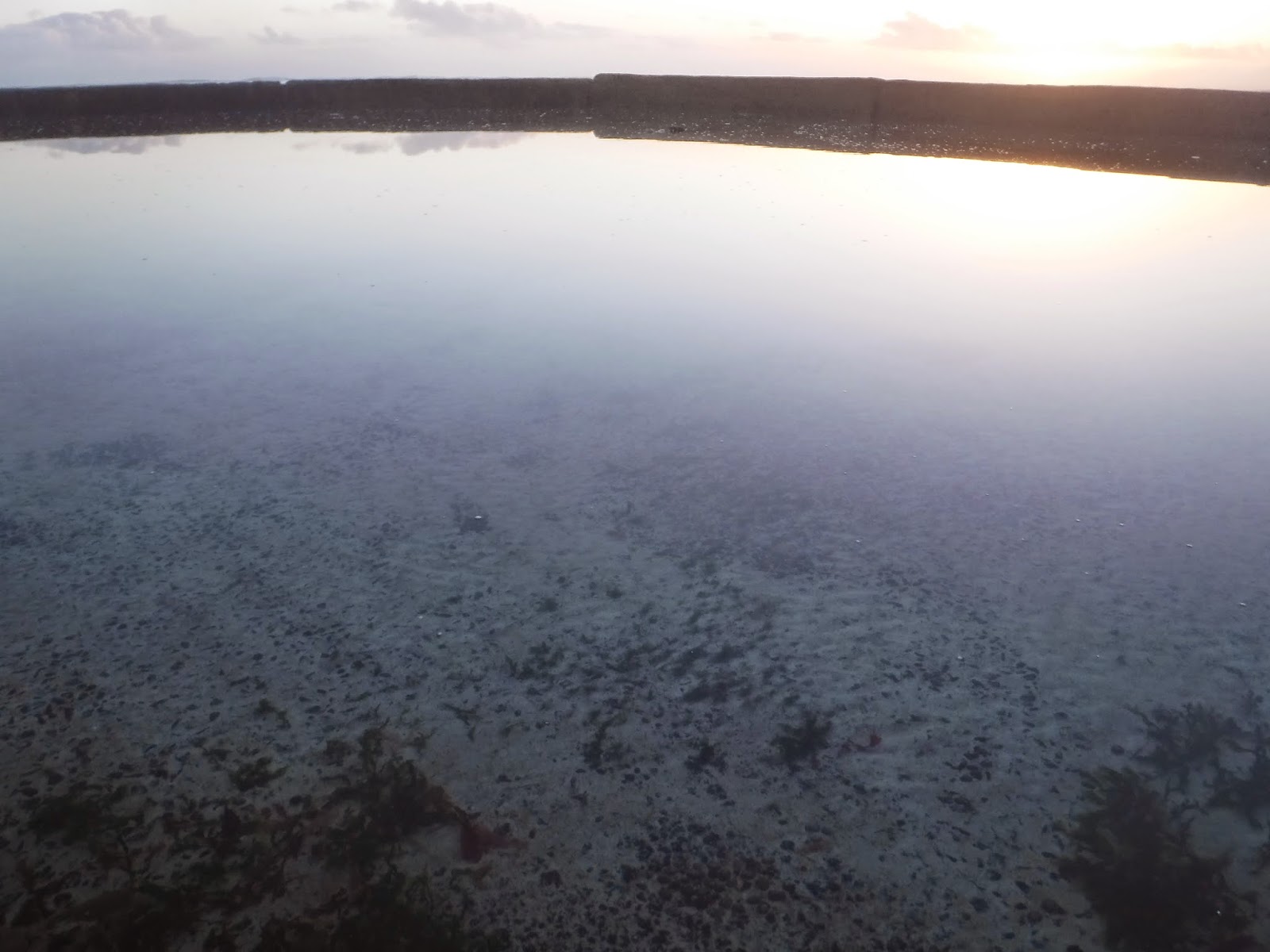 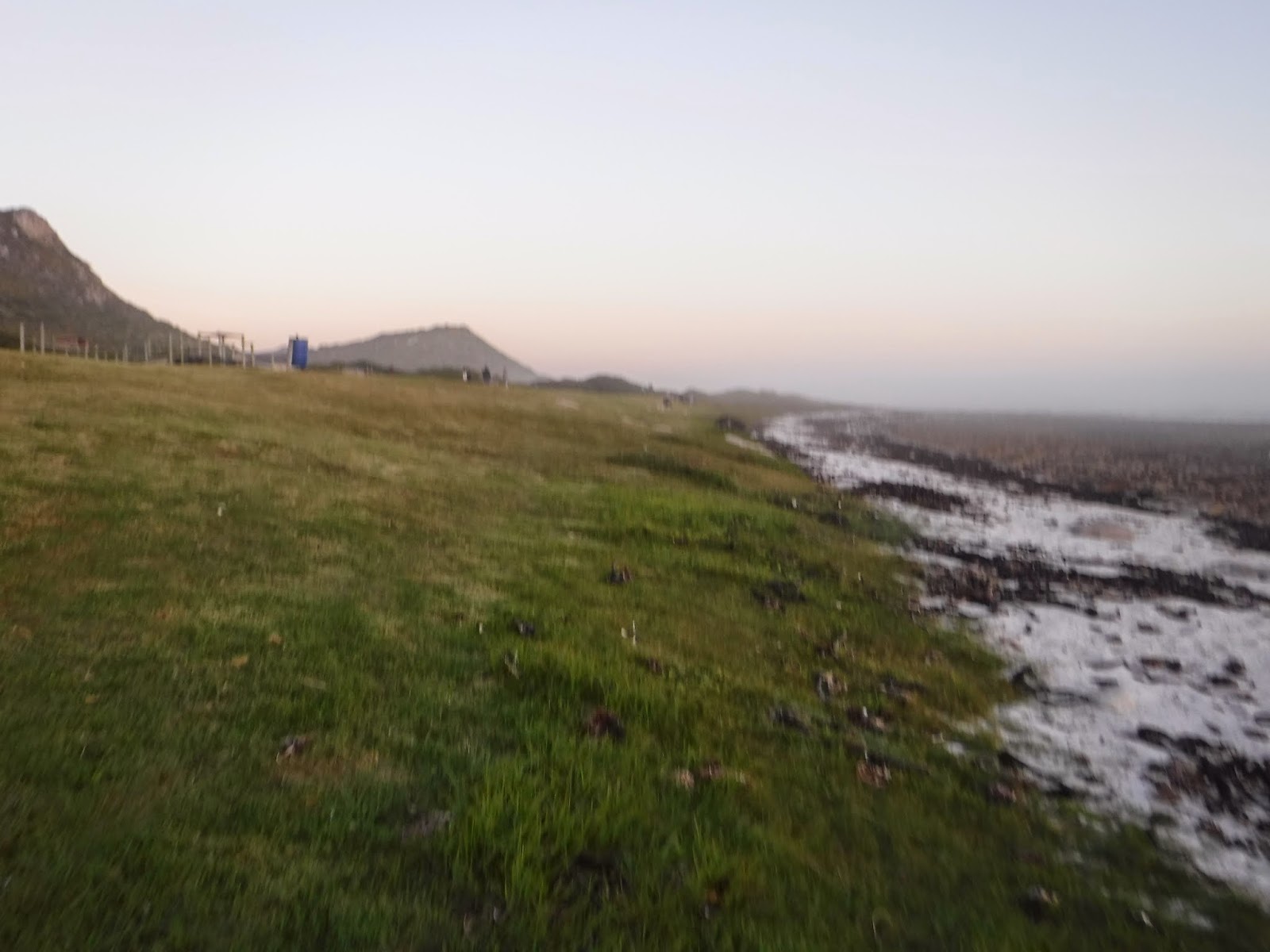 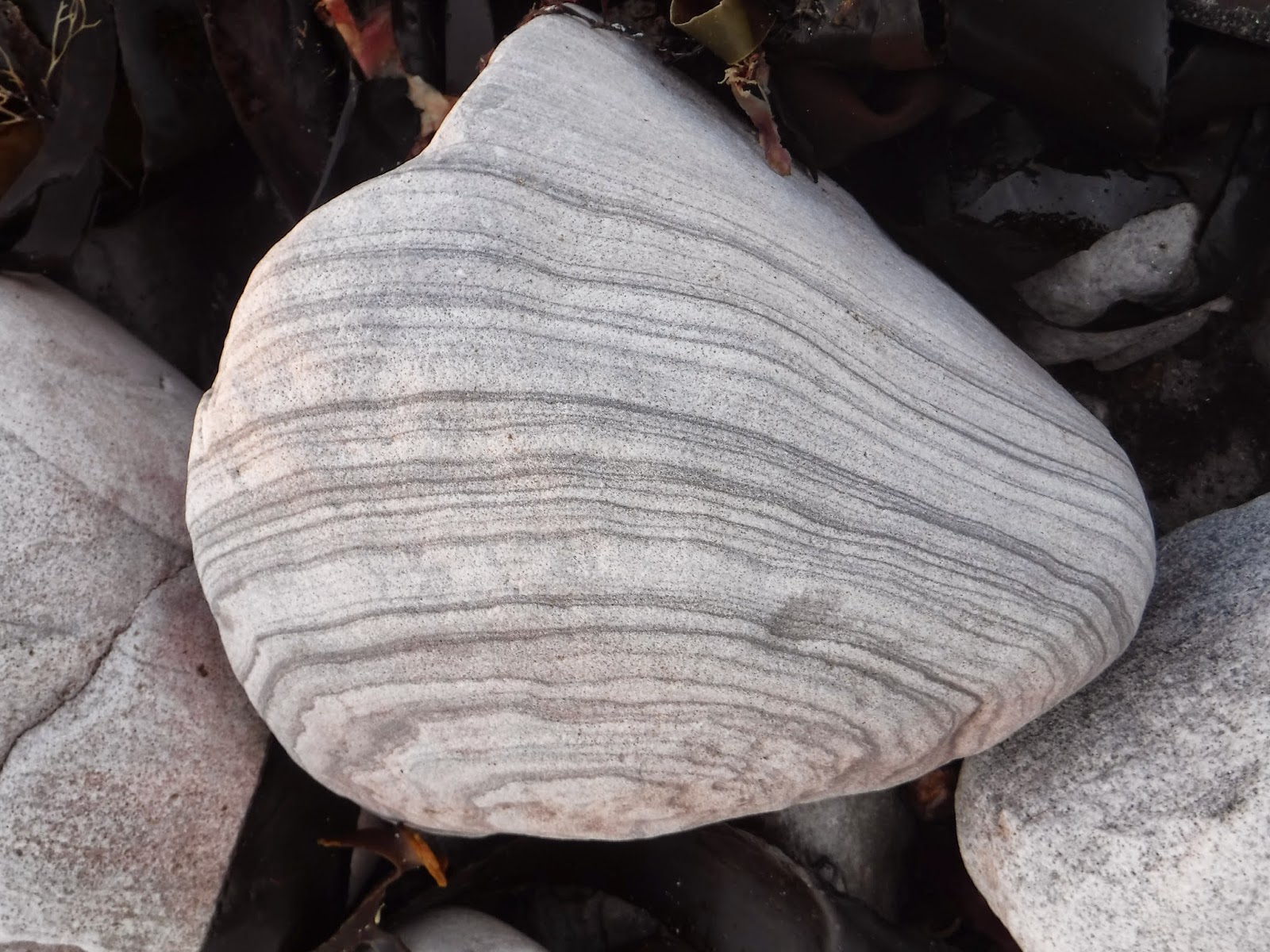 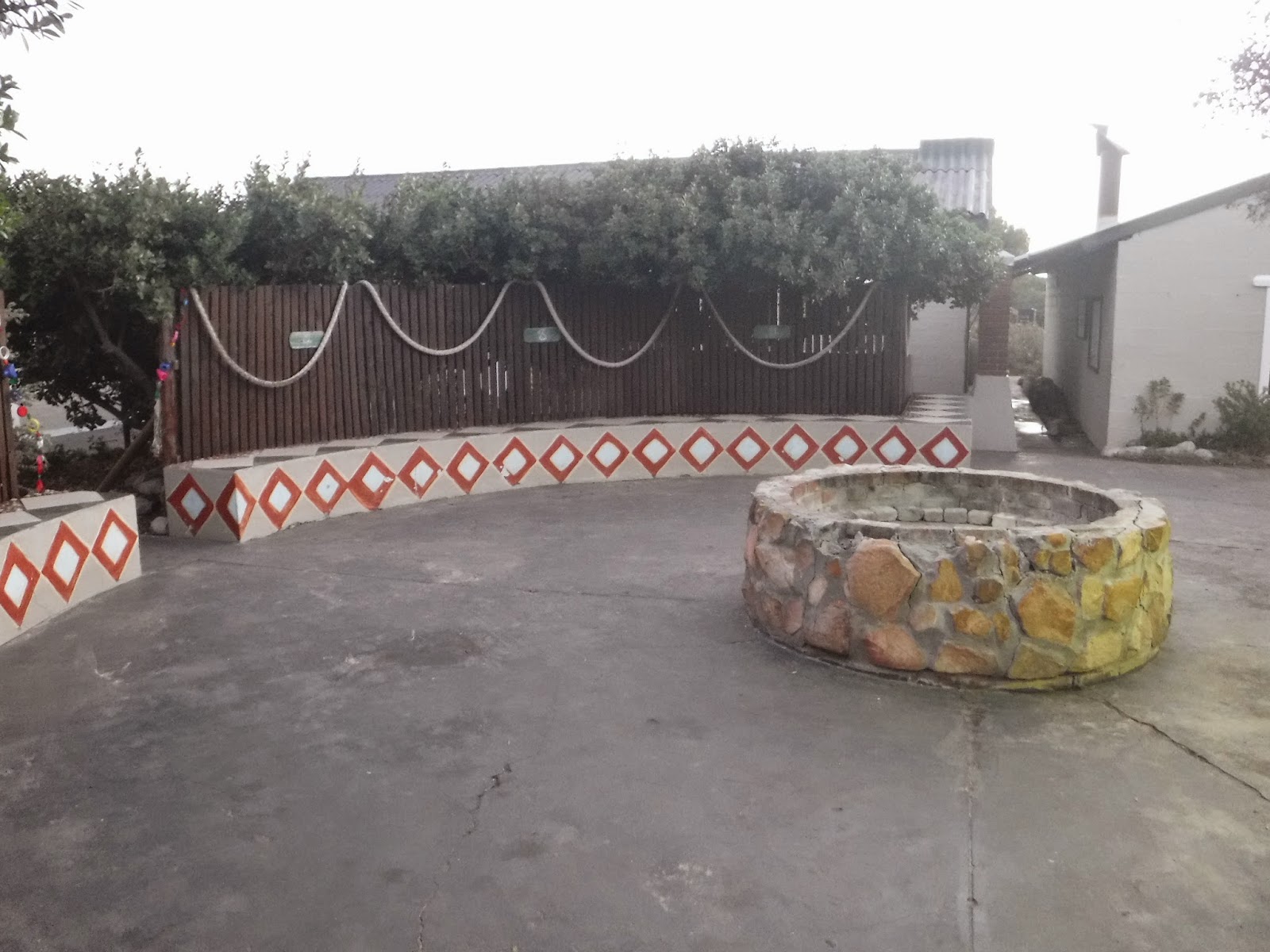 So Friday, my group was to go over to Simon's Town where we would go on a boat to collect some CTD (conductivity, temperature, depth) data on oceanographic conditions in False Bay. They had asked if any of us were keen to do some snorkeling. I raised my hand as keen but unequipped. It turns out us snorkelers would be getting into the water in the marina to do an abalone survey. These highly valuable marine animals were recently discovered there, and a quantification needed to be made in order to monitor for potential poaching events and help promote protection.

Damn that water was cold! Fortunately, one of my lecturers loaned me his wetsuit (something I had never worn in my life). I made it halfway into the wetsuit and decided that covering the bottom half of me would be enough. As soon as I got in and discovered what 11°C (~50°F) water feels like, the rest of the wetsuit slipped on with no trouble. The researcher we were assisting commented that a wetsuit may have never been put on so quickly. While the water was horrificly and inhumanly frigid, the habitat was lovely. I have never seen such clear water in a marina. And the urchins, anenomes, seastars, seagrasses, and abalone were beautiful. It was rough counting and measuring the abalone, and we would take shifts getting out of the water and running into the yacht club's showers to stand with hot water running into our suits. Still, an awesome experience...

The boat came back, and we traded in with the other half of our team. They took the CTD sensors back to the station to organize the data, and we went out on the boat to put down some Baited Remote Underwater Video apparatuses (BRUV) for a fish-count survey. We also did a little fishing. I caught a small pajama shark (someone took a picture, but I have not received it...probably on Facebook somewhere...). After that, we collected our BRUVs and went back to the dock.

I was asked to leap from boat to pier to help tie up the boat. While the details are still a bit hazy for me, I did not stick the landing. Rather, I slipped and flew into the face of the dock and knocked my wind out. While hitting the dock sucked, I am grateful I did not miss it. Had I knocked my wind out and slid into the (remember, very cold) water, I may have drowned. When I could breathe, I discovered that I was also bleeding profusely. The boat was tied off appropriately and first aid administered. Then, we all piled into the combi for a trip to the emergency room!

I ended up getting five stitches in my thumb (my right hand, of course, because my left is useless). I also have a cracked rib and a bunch of bruising. Needless to say, it made the rest of the field trip a bit of a wash. The pain of laying down or sitting up or rolling over meant that my shrieks would have woken the others, had anyone else elected to stay in that one bunkhouse (see, worked out for everyone).

The next day involved gathering CTD data on a heavily developed estuary near Muizenberg, and the day after that was spent on the rocky intertidal gathering data to test the intermediate disturbance hypothesis (essentially, that too much disturbance prevents animals and plants from settling on a surface and that too little means that eventually a small number of species dominates...so the most diversity will be found in situations where a middling amount of disruption occurs). I was a bit flimsy and not able to get my hand wet, so I mostly tagged along for decoration and moral support.

We then compiled the data from all the groups on the different projects. In another week's time we will have to hand in a small write-up of the projects with the data properly analyzed. Wheeee.

It was nice to get back to Cape Town, though it hardly meant that I was healed.

Gratefully, no infection has occurred with regards to my finger. My stitches have come out and I hotly anticipate a return to function in my right hand. My chest still hurts, and paracetamol has been my friend (acetaminophen), but it appears to be getting slowly better.

Each of the days of the trip, the other groups would report back that they saw my blood on the docks ("On a blood-stained dock in Simon's Town" sounds like the opening line to a Nick Cave song)... I like to think that I left my mark on Africa, and vice versa.