September 23, 2014
I realize it has been a while since I have posted anything. My apologies. It has been a rough week and a half.

The return from Byron was rough. The soup du jour of that trip was disappointment. There were promised meals that we ended up having to pay for and free wifi that turned out to be a myth. We reconvened to meet the bus, only it was an additional hour before it arrived, and close to another hour before we departed Byron Bay. The side-trip to hippie-ville was cancelled (I was okay with this, although we did technically pay for it). We made multiple stops along the way back to Brisbane to pick up and drop off other groups. Rather than dropping us off in city-centre when we got back to Brisbane, the bus dropped us off at the university, from whence the majority of us had to catch public transit back to city-centre to get home. It was well after 9pm when I finally returned home.
There are two things from the Byron Bay trip that I have unfairly omitted from my story, and I wish to correct that. Despite the disappointments of the misleading itinerary and the generally disturbing spring-break-like atmosphere, Byron Bay is a beautiful area. More importantly than that, however, is the reception I received from my fellows when I turned up for the bus Friday night. Then, as throughout the weekend, my new young friends frequently commented how excited they were that I joined them for the excursion. I cannot overstate how heart-warming it was to be informed so frequently that people were genuinely glad to have me along. I cannot say that I have ever felt so overtly and explicitly included. Regardless of anything else, that really has the power the make the weekend one of the best.

Then, that following week, I caught the flu...a nice little viral number that laid me up something fierce. I actually missed a day of class, unable to get out of bed. It was 48 hours before I ate solid food. Last weekend's agenda consisted mostly of finishing my research proposal (for the upcoming week at Stradbroke) and reviewing the lectures I missed. Andrew, or the best roommate in the world as I have come to call him, used his GoPro to film the lectures I missed. Bless him.

They have been slamming us with the marine biology portion of this program. We have an exam this Thursday covering the last week and a half packed full of lectures (on Australian water systems, freshwater management, estuary biology, seagrasses, marine invertebrates, marine mammals, marine reptiles, and several other subtopics). Then, we leave Friday for North Stradbroke Island (Stradie, as it is known in Australia). It is allegedly beautiful, and I hope that I will have enough time outside of the lab to enjoy it.

My team (one of six in this bunch of UC students) will be testing the olfactory (well, less specifically, the chemoreceptive) preferences among a species of black rabbitfish (aka mottled spinefoot, stinging bream, black trevally, dusky rabbitfish, and Happy Moment). This species is not well studied. Researchers are setting up cameras to observe them and gain information about their support to reef and seagrass communities. Our study will help the researchers determine how to bait the cameras to attract the fish into view of their cameras. The fish have intense spines and are somewhat toxic. A lovely week lies ahead, without doubt.

I have taken a couple of gentle walks around the neighborhood, encountering a little game of cricket going on in the local park as well as some beautiful wildlife. I will post some more pictures soon.

I have also been hard at work with course-selection, housing applications, and university details for next semester's trip to South Africa. It feels awkward spending time in Australia planning my next trip, as though I am busy dreaming about the future and not being present. Still, it must be done.

I miss Fred a lot. I start to focus on how much of this study program is already over and how little is left. The lingering cough hanging on after the flu is obnoxious. It is not always easy to look on the bright side.

However, the weather here turns warmer. There are exciting field trips, including two fairly self-guided research projects, ahead. The Californians and I regularly look at each other, smile, and muse out loud, "Dude...we're in fucking Australia!"

Ultimately, my friends in the programs (both of them) have been very good about keeping me positive and present.  And I have to love that while here, I get these kind of text messages to check on me: 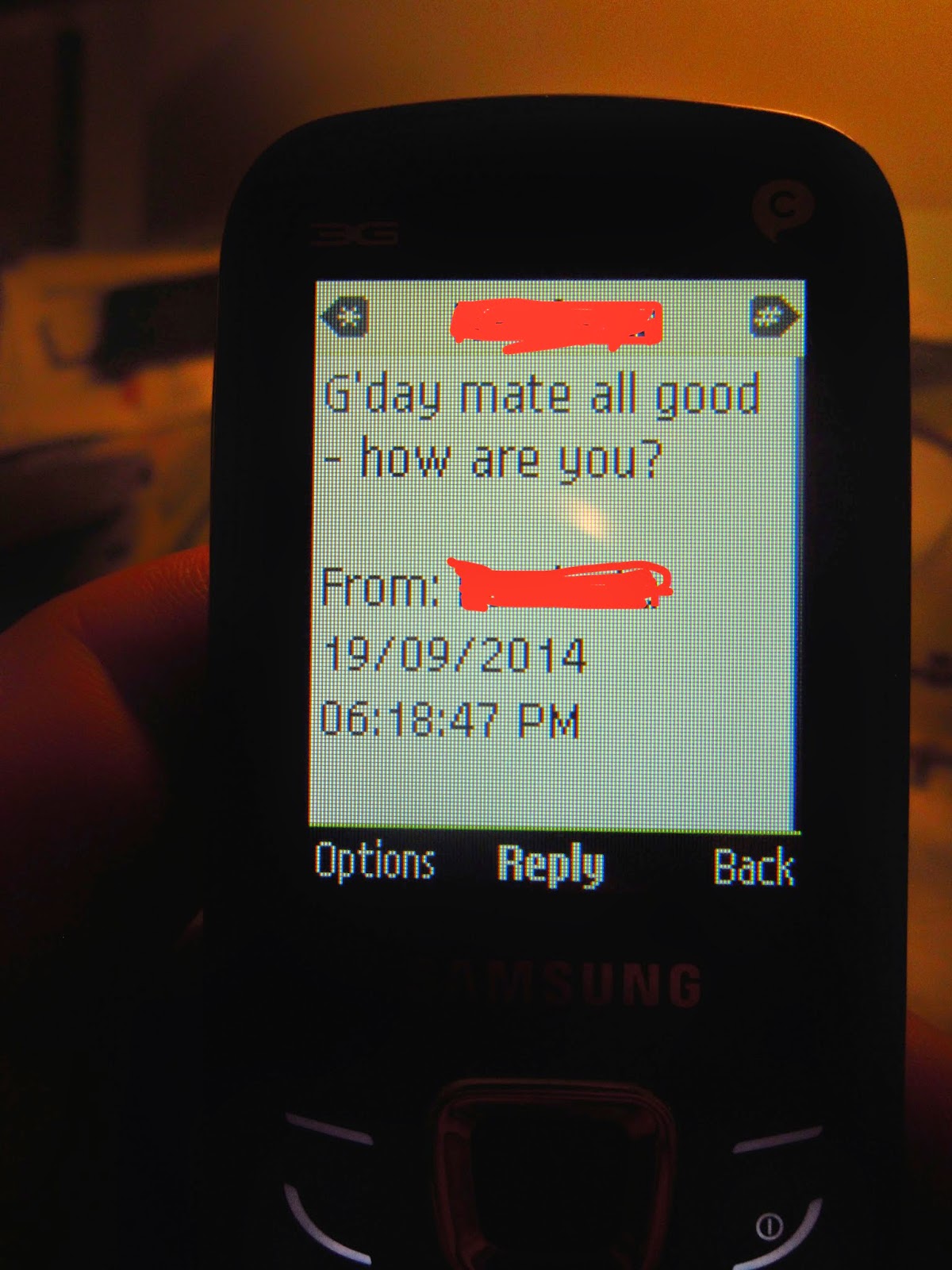