August 23, 2014
This evening, our party returned weary, dirty, damp, and scruffy to Brisbane. For the last four-ish days (seriously, the passing of time here is something else...coupled with international date lines and time spent camping, where clocks are more or less meaningless), our crew has been studying and participating in gathering field data in Giraween National Park, on the border between Queensland and New South Wales.

It is traditional Australian scrub-land (or dry sclerophyll forest, as we learned in our lectures). It has some amazing granite tors (clusters of eroded granite boulders) that are reminiscent of Joshua Tree (or Hampi in India). 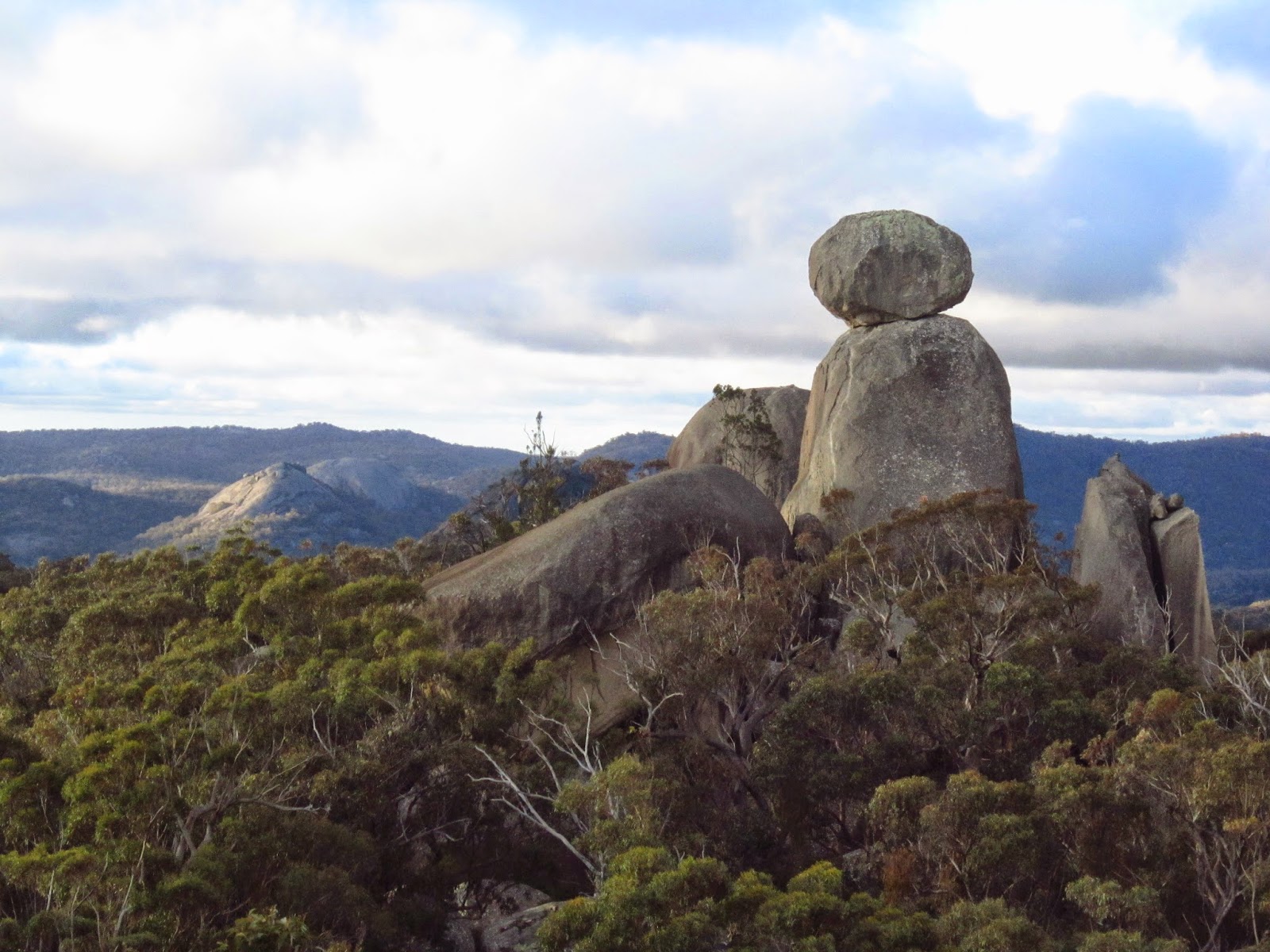 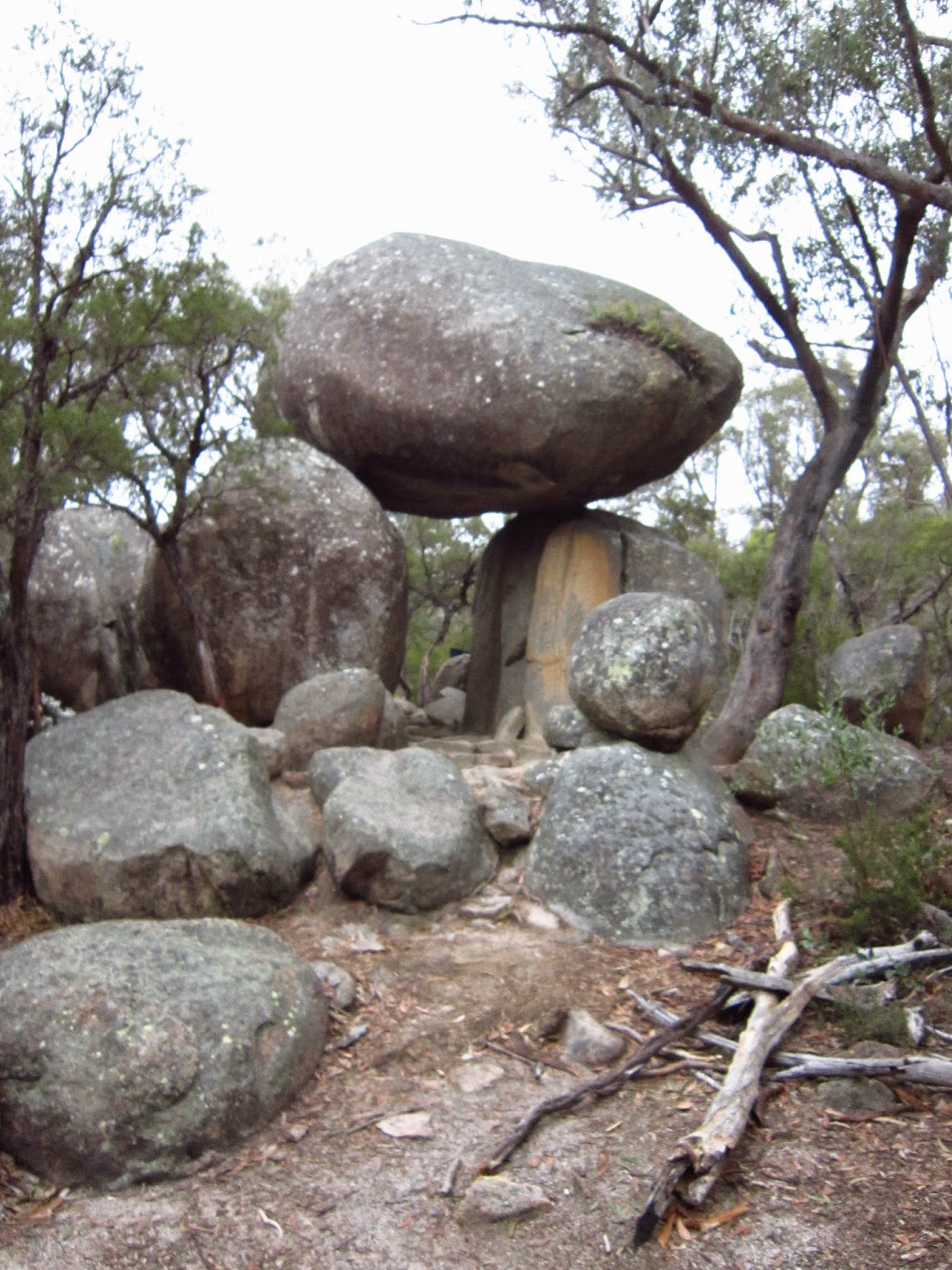 A portion of Castle Rock: 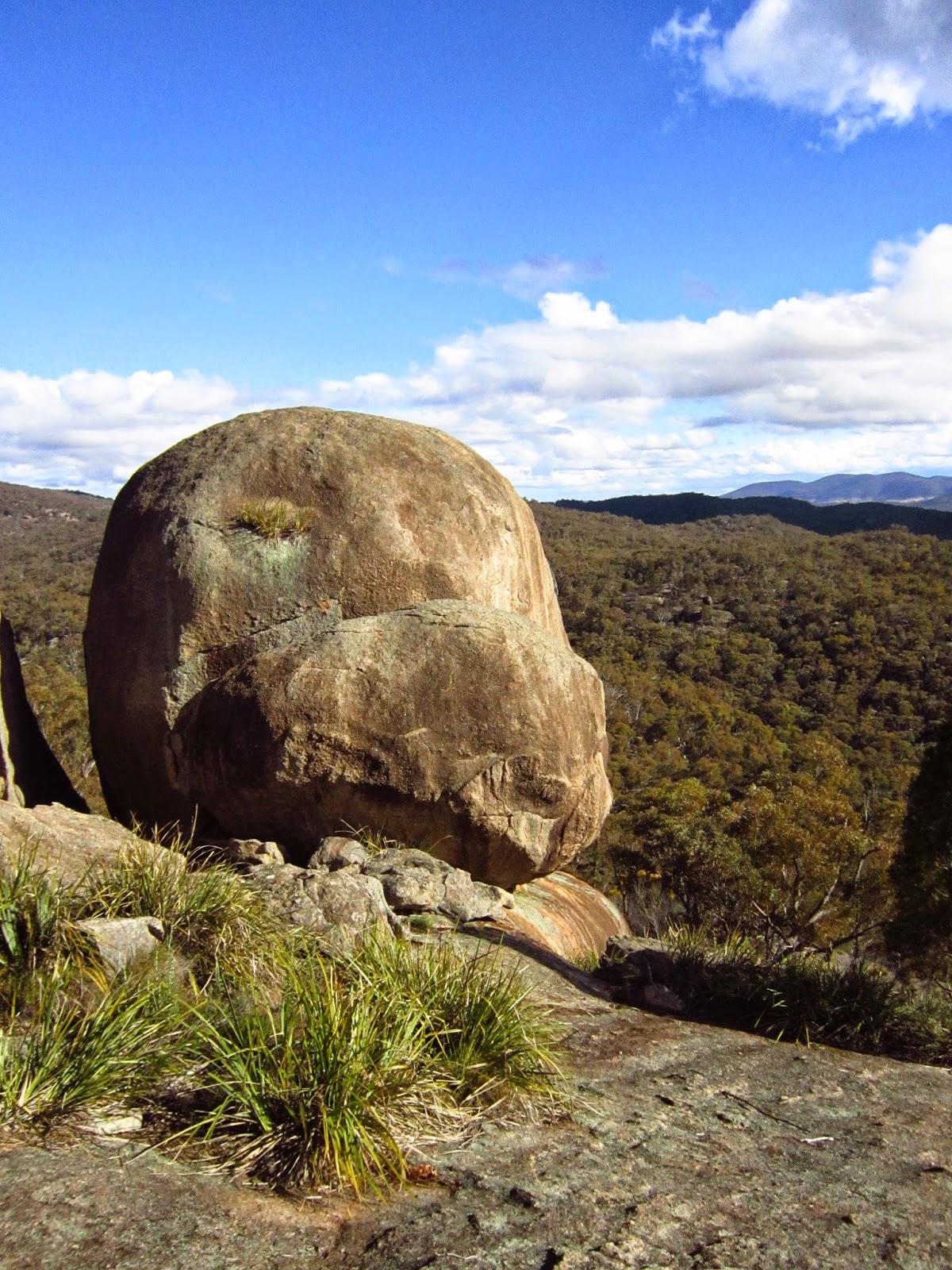 Our first faux-casualty (courtesy of Shira): 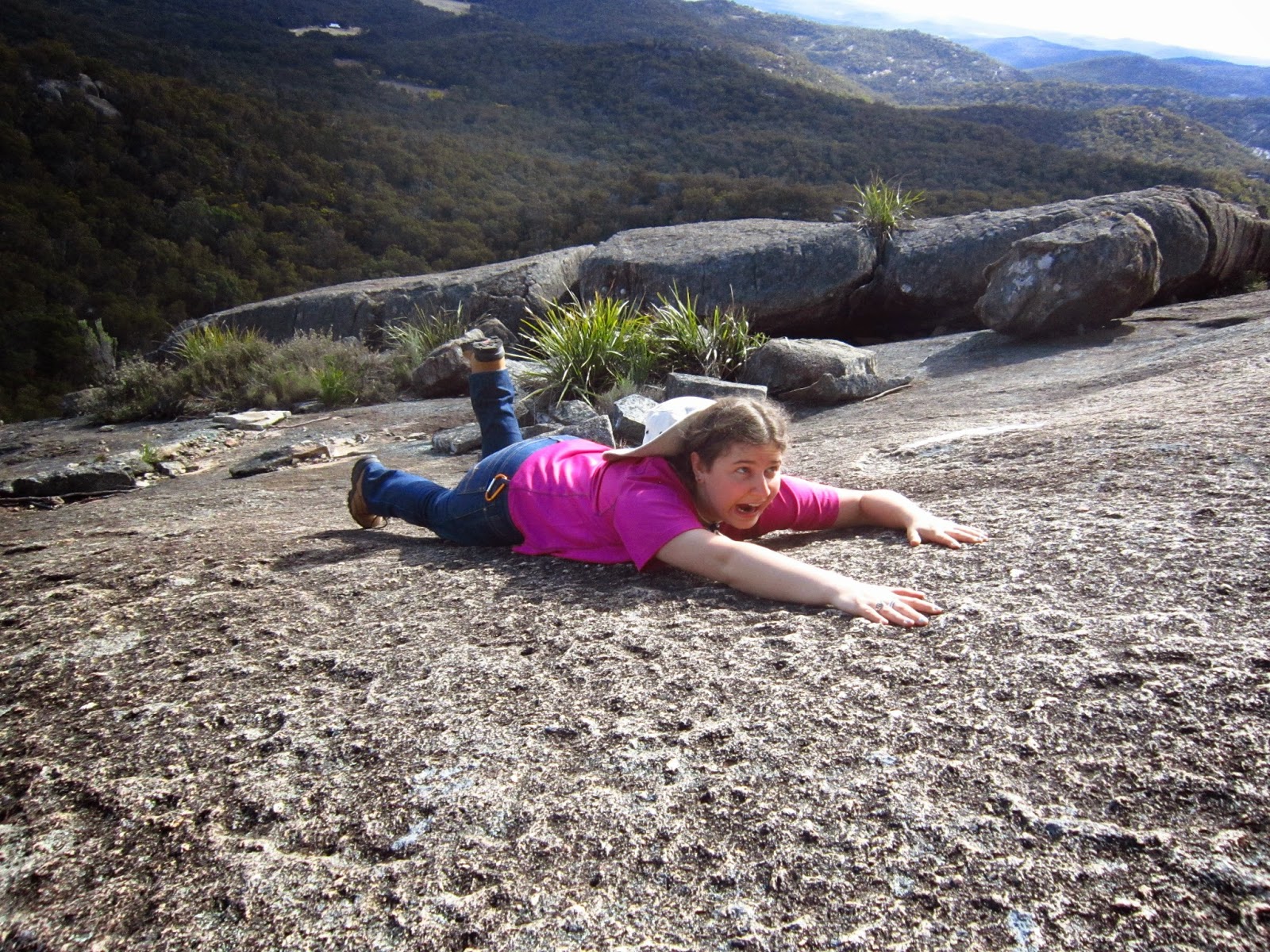 (I should add that occasionally my posts get updated with pictures and other odds and ends. The picture matter has to do with the fact that in Australia, almost all internet plans have a data limit, which means that uploads and downloads can tax and eventually shut down someone's connection. I try to hold off on some of these until I get to school out of respect for my hosts)

Over the course of the time there, we sat in lectures held in a ranger's station, in our campsite, in various fields and creek beds, and occasionally along the hiking trail while stopping for a quick drink of water. Needless to say, taking notes (and I am a meticulous note-taker when it comes to my academics) could be difficult.

And it was cold! Remember it is Australian winter. The administrative team at the International Programs office attempted to forewarn us, and the weather did not fail to deliver...although we apparently got it easier than in previous years. We never fully froze, but the week was an adventure in layers. I now regret not stopping to purchase gloves those several times I thought of it over the last few months. Fortunately, I did pack for some warmth, and besides the first night when my air mattress gave up its structural integrity and I awoke to realize my back was pressed on cold rock (through the sleeping bag, of course), the temperature was never truly unbearable. The last night and day also saw some unseasonably early rains that brought a new light to the camping trip, including the final push to pack up and take down 35 tents in the wet. My poor tent-mate found this morning that a slight gap between the rain fly and the tent allowed a puddle to form beneath his belongings, soaking just about everything of his. Tip for campers: choose the slightly uphill side of the tent!

We received a lecture from the ranger on park management strategies that include fire regimes, changing political attitudes toward national parks, and relations with neighbors (including private holdings and other national parks). It turns out that national parks in Australia are managed by the individual states, which makes for some interesting relations between Girraween and a neighboring park that is in New South Wales.

Dr. John also delivered some excellent lectures on Australian vegetation and its relationship to fire and the geologic and geographic idiosyncrasies of this continent. He has an incredible knack for keeping 30 completely exhausted UC students in thrall with his Tom Baker-like appearance, groan-worthy yet guffaw-evoking jokes, poetry recitations, and lectures that reflect both a sense of wonder at the intricacies of the natural world and a deep sense of pride in his country.

In the field, we observed a variety of birds and kangaroos. 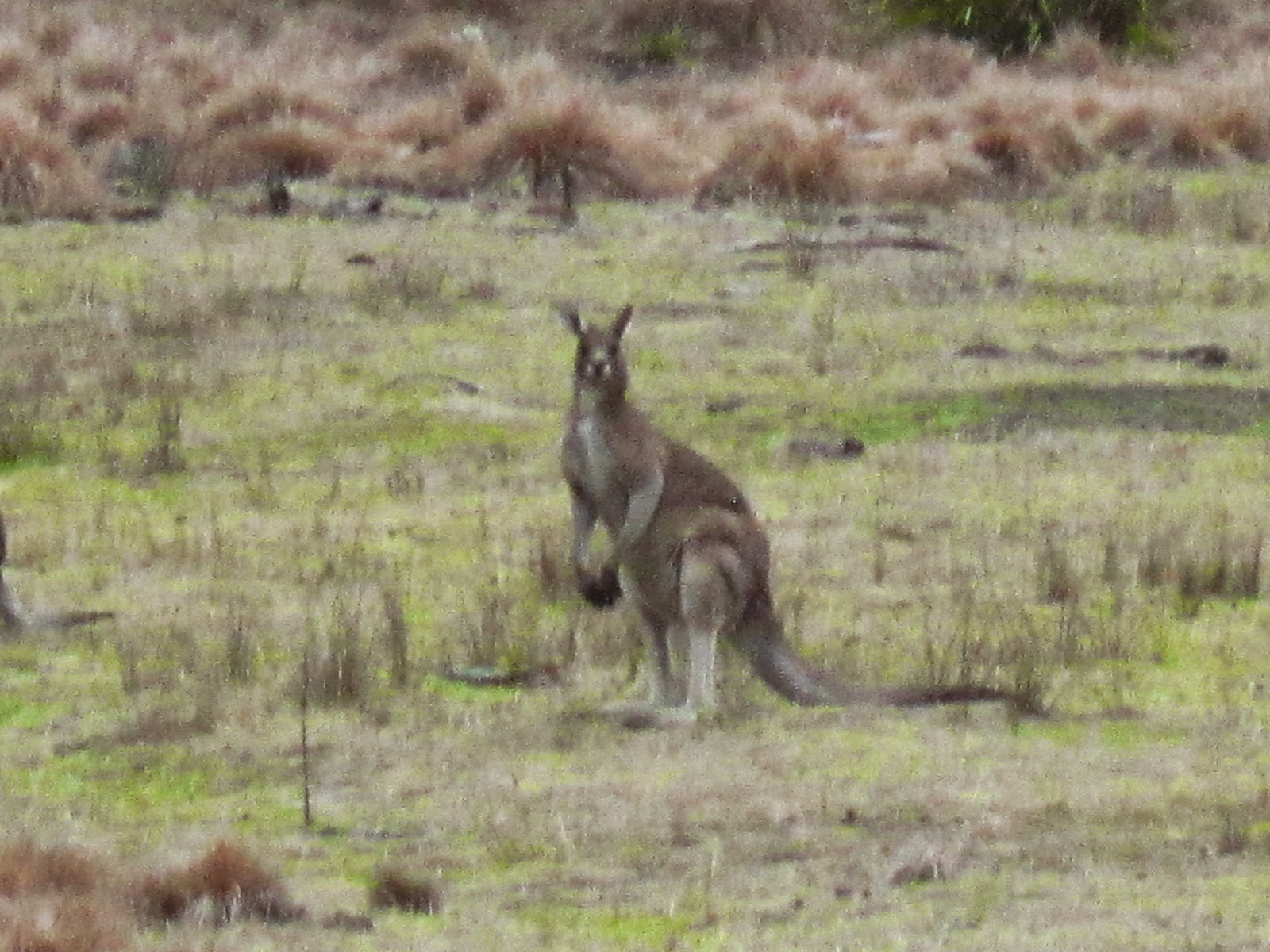 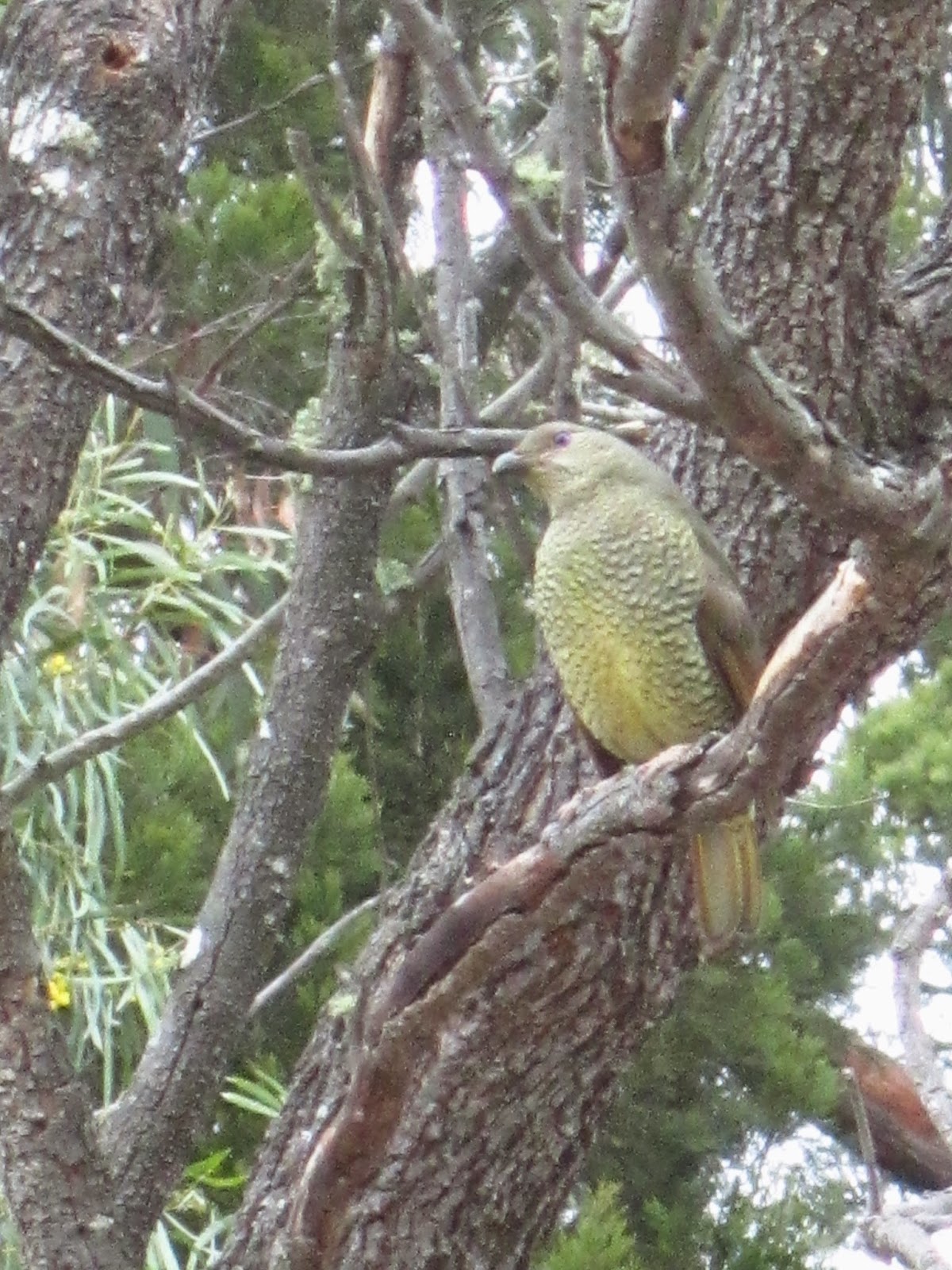 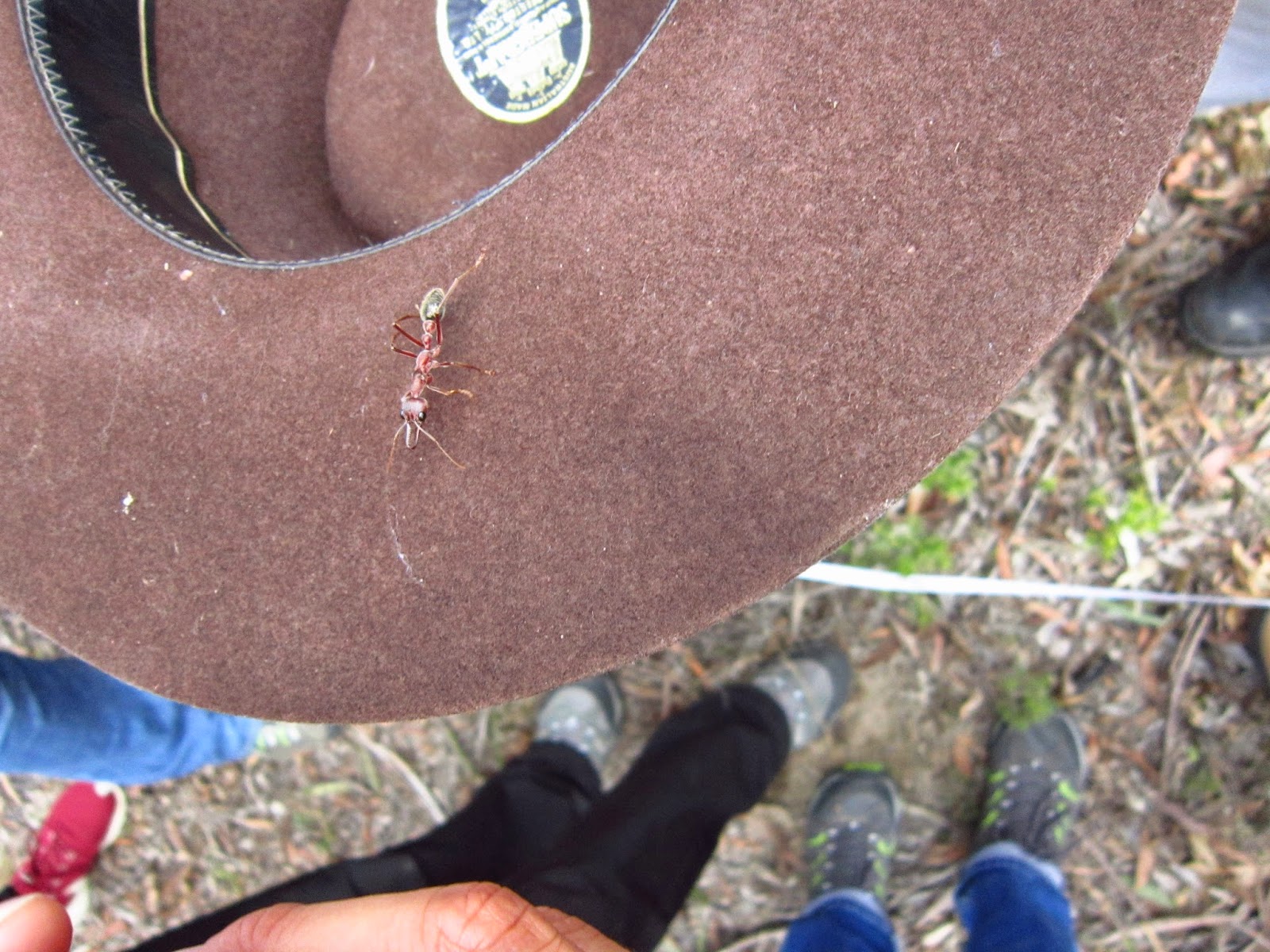 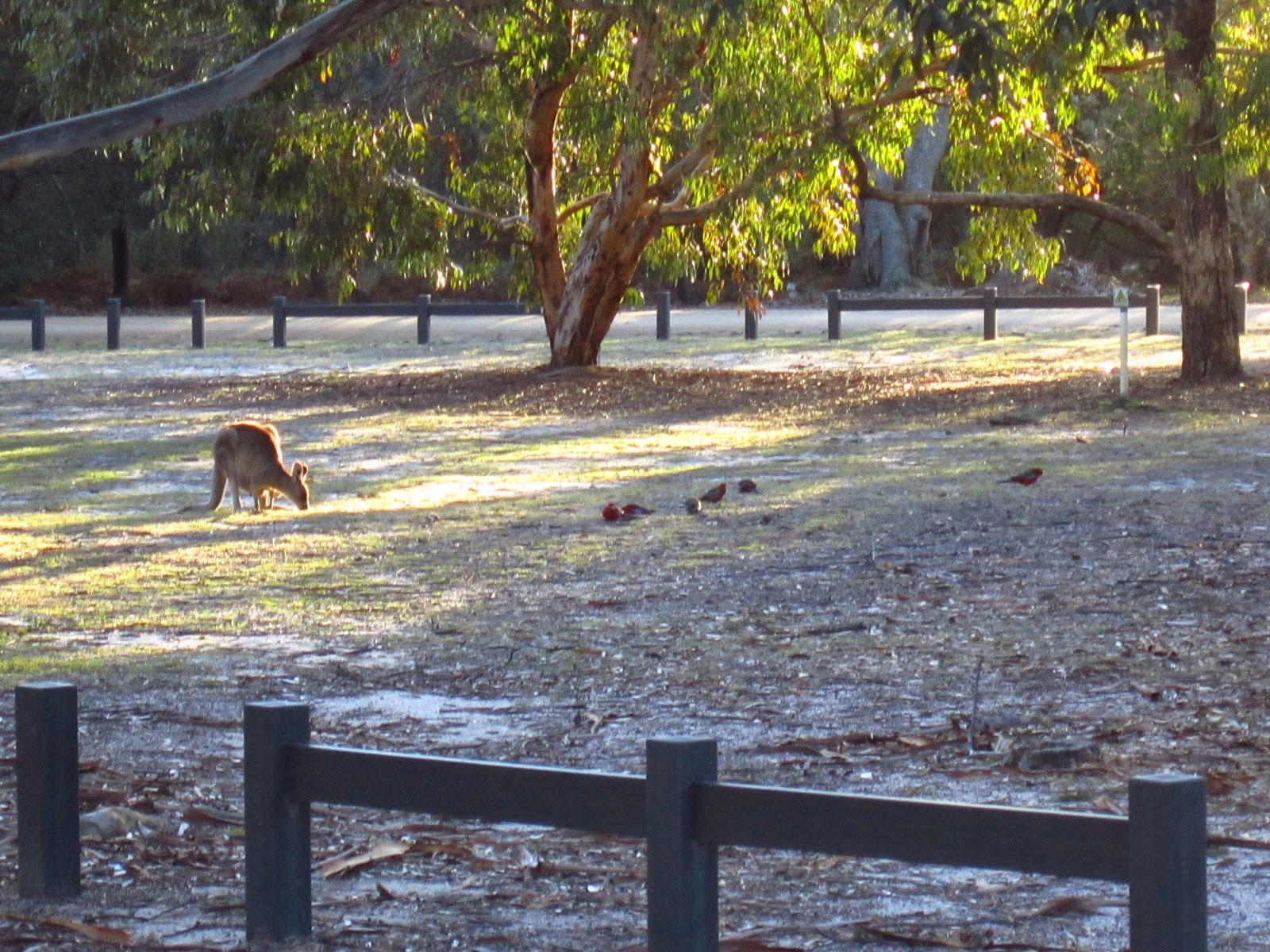 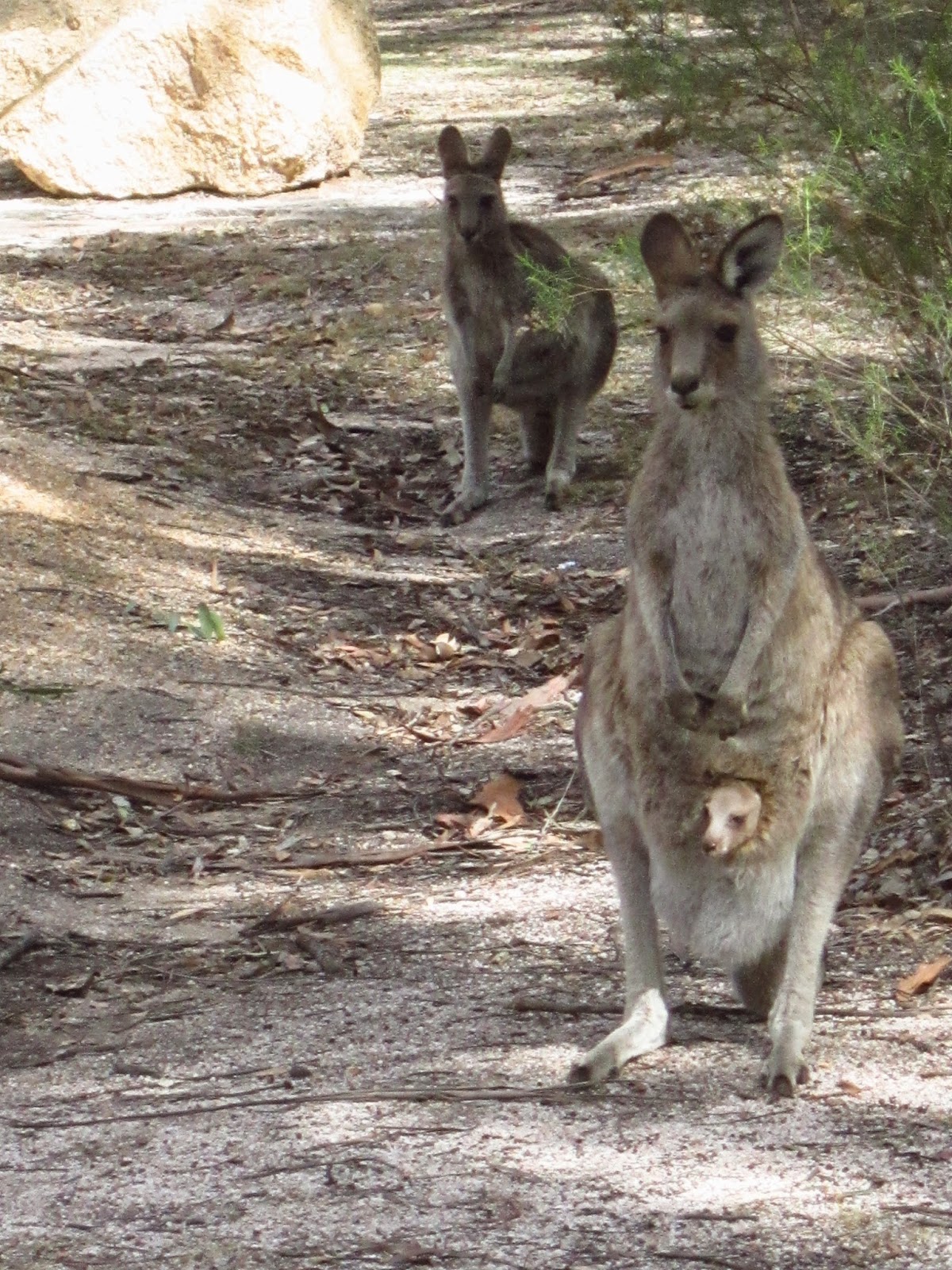 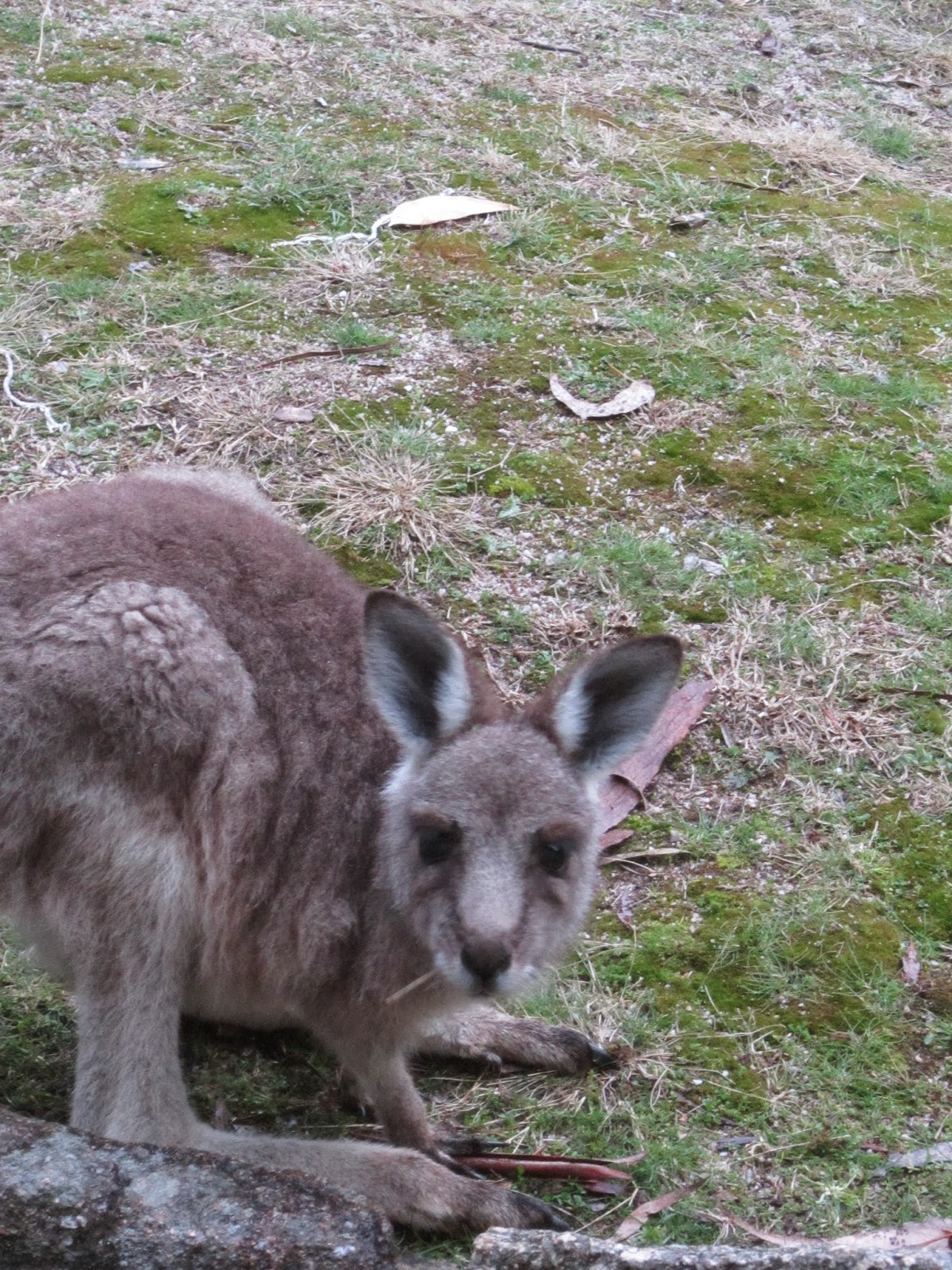 It was a whirlwind of activity. We were exposed to forest canopy and organism mark and recapture surveys. We gathered data on kangaroo grazing (believe it or not, by counting scat abundance) and its effect on grassland persistance and forest regrowth as well as on potential indicator species that help determine policies on control fires set in the national park. Mornings started early with the clattering cries of kookaburras and magpies, followed by a nature walk, which we trudged through still heavily bundled for warmth. 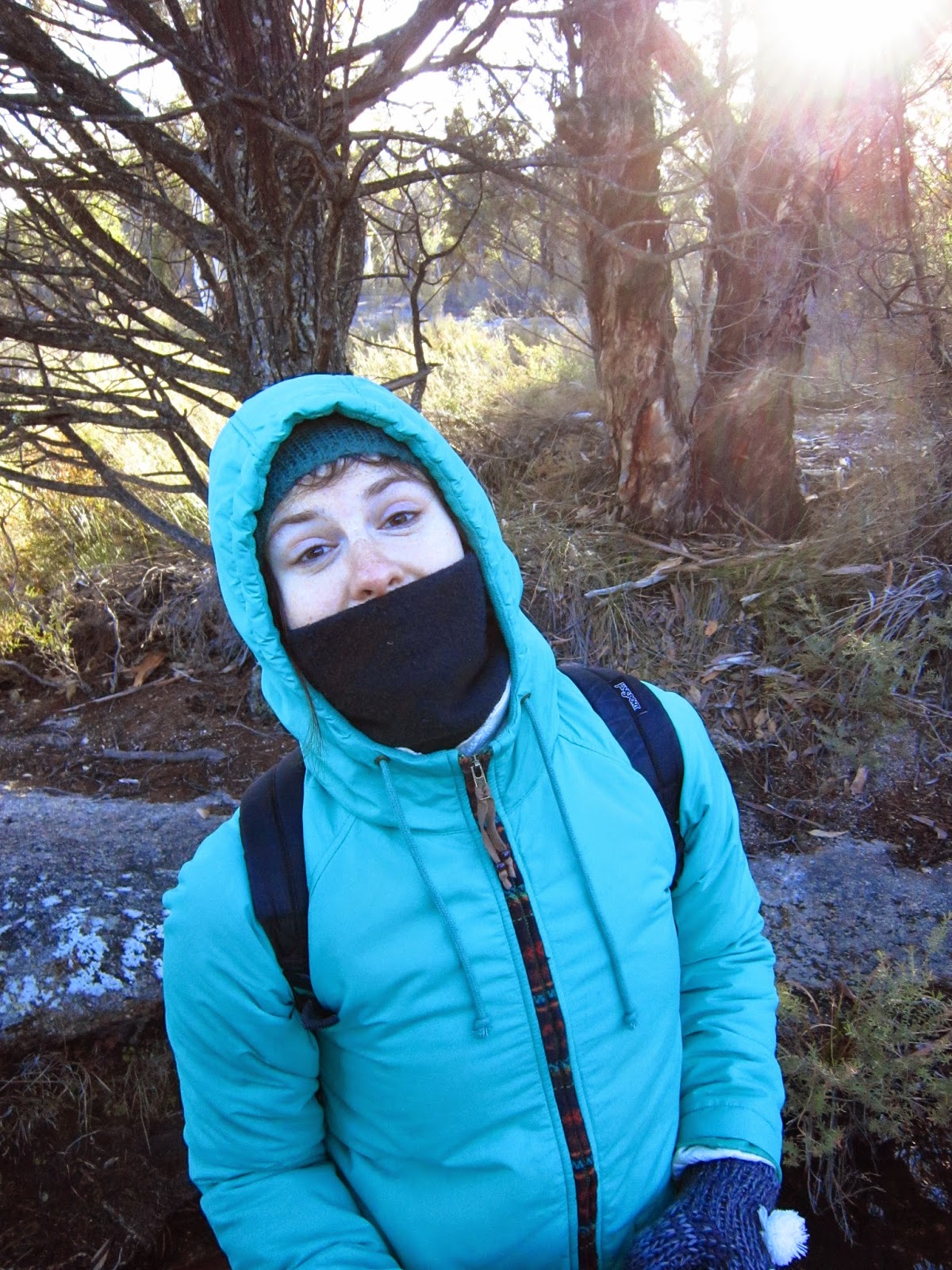 Corrine pining either for a warm sleeping bag or a warm breakfast.

We then split into teams and embarked on some of the aforementioned data collections as well as further hikes to portions of the park. On these hikes, frequent water breaks (it is indeed easy to get dehydrated here, and I somehow even ended up with a sunburn on my face during the final day's rain showers) were used as opportunities to discuss the ecology of various organisms and geological conditions in the park.

Dr. John waxes poetic on the landscape while delivering some deep ecology: 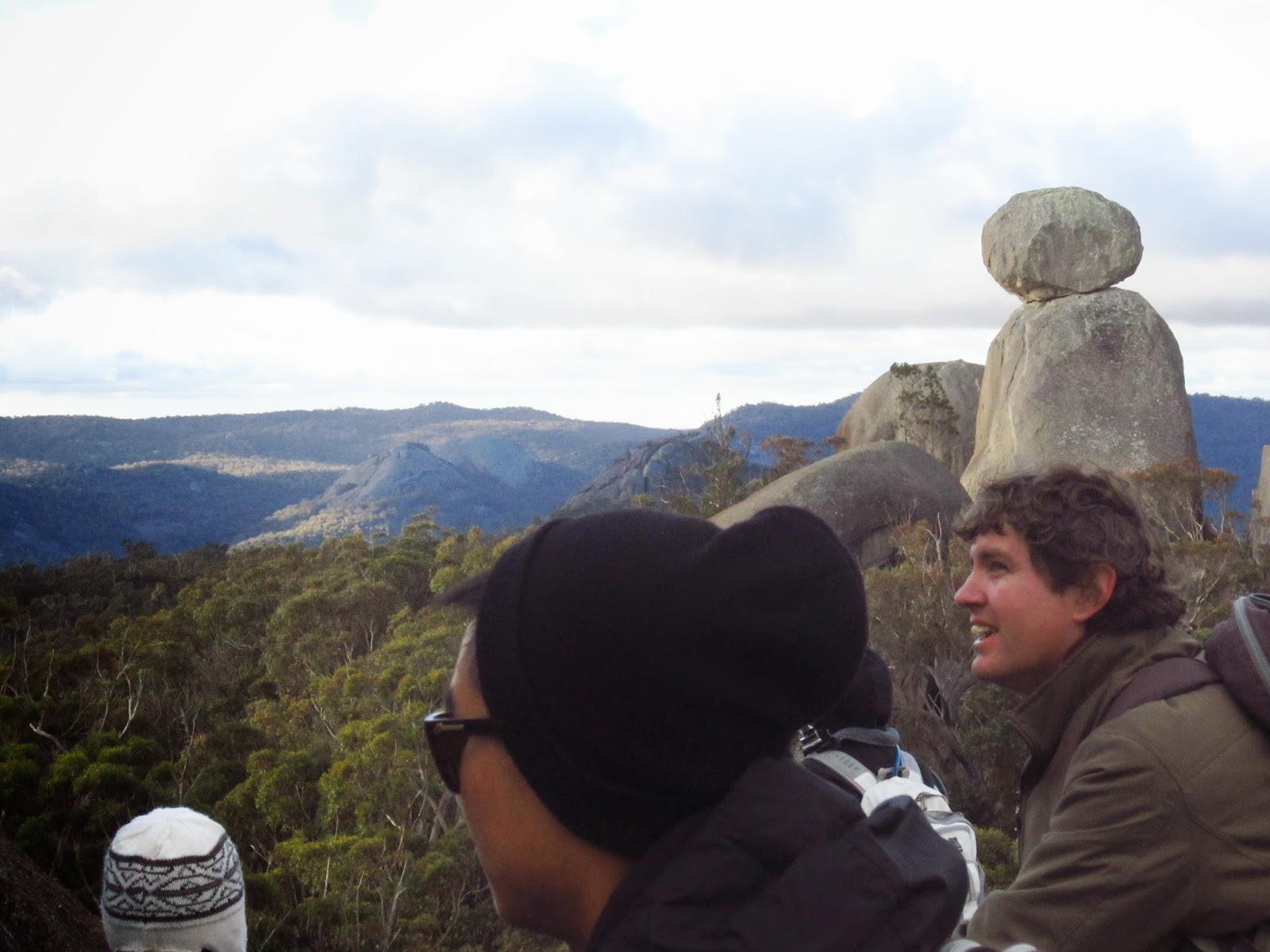 Tutors (Australian for Teaching Assistants) Toby and Nikki cheerfully see us through a lesson on plant biology and its relationship to fire: 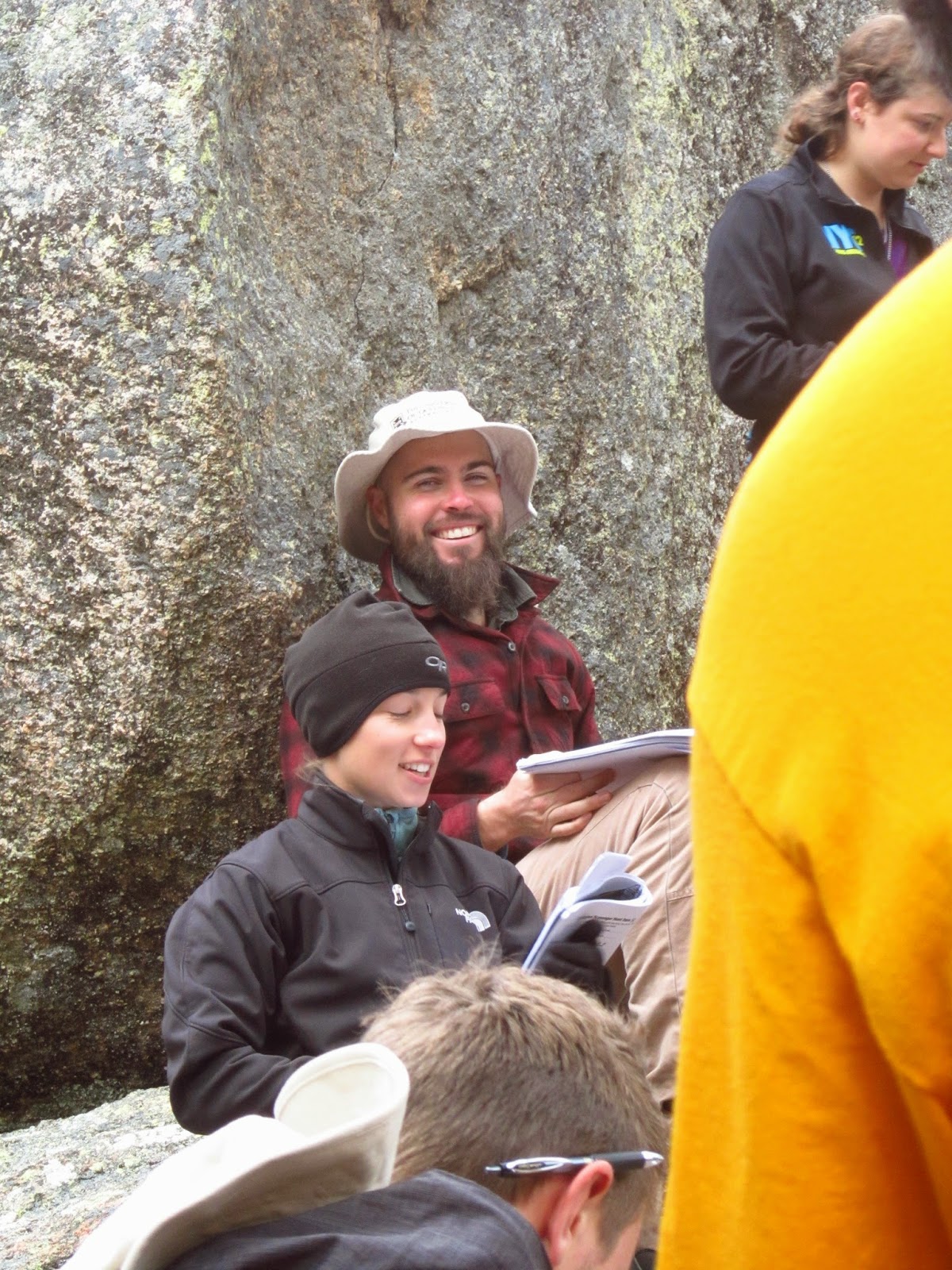 The gang grabs for field notebooks on a short break from the hike: 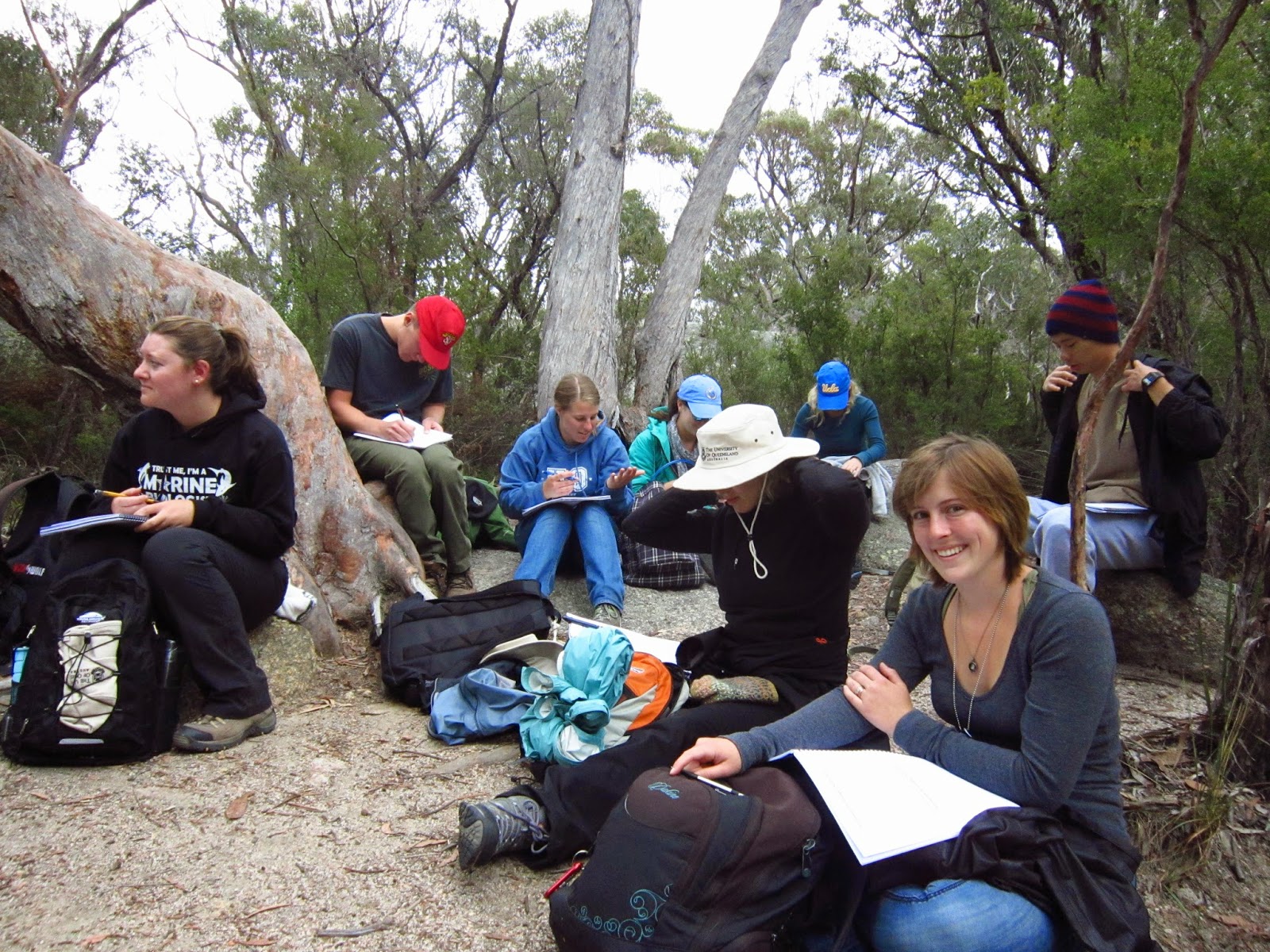 In addition to taking notes and gulping down some water, we all were frequently faced with the decision of whether to pull on or peel off more layers. The temperature could fluctuate based on how high the altitude and the wind was, and various stretches could be more strenuous, throwing perspiration into the calculation for how much clothing to have on. We found ourselves at some spectacular places requiring varying states of dress: 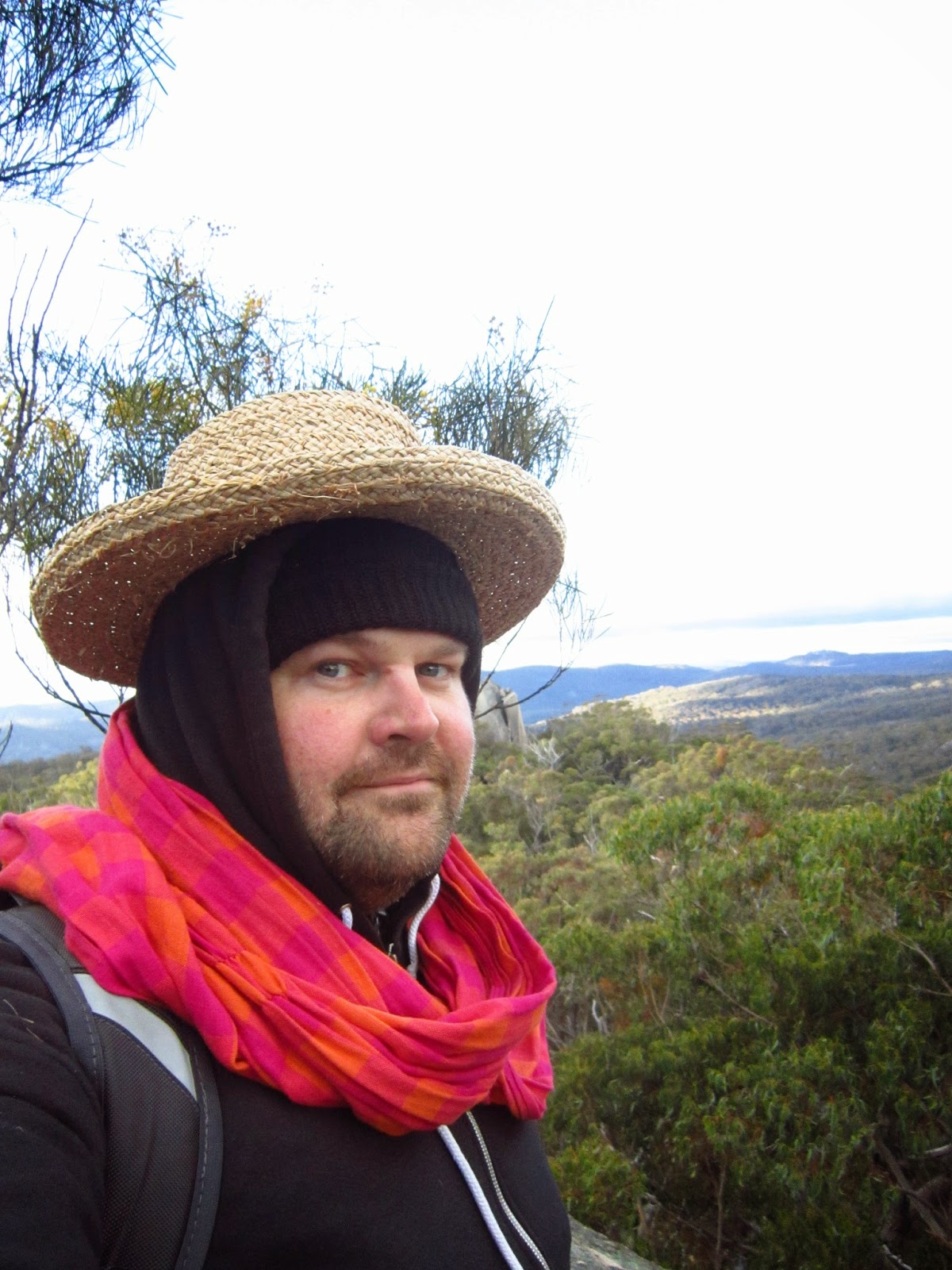 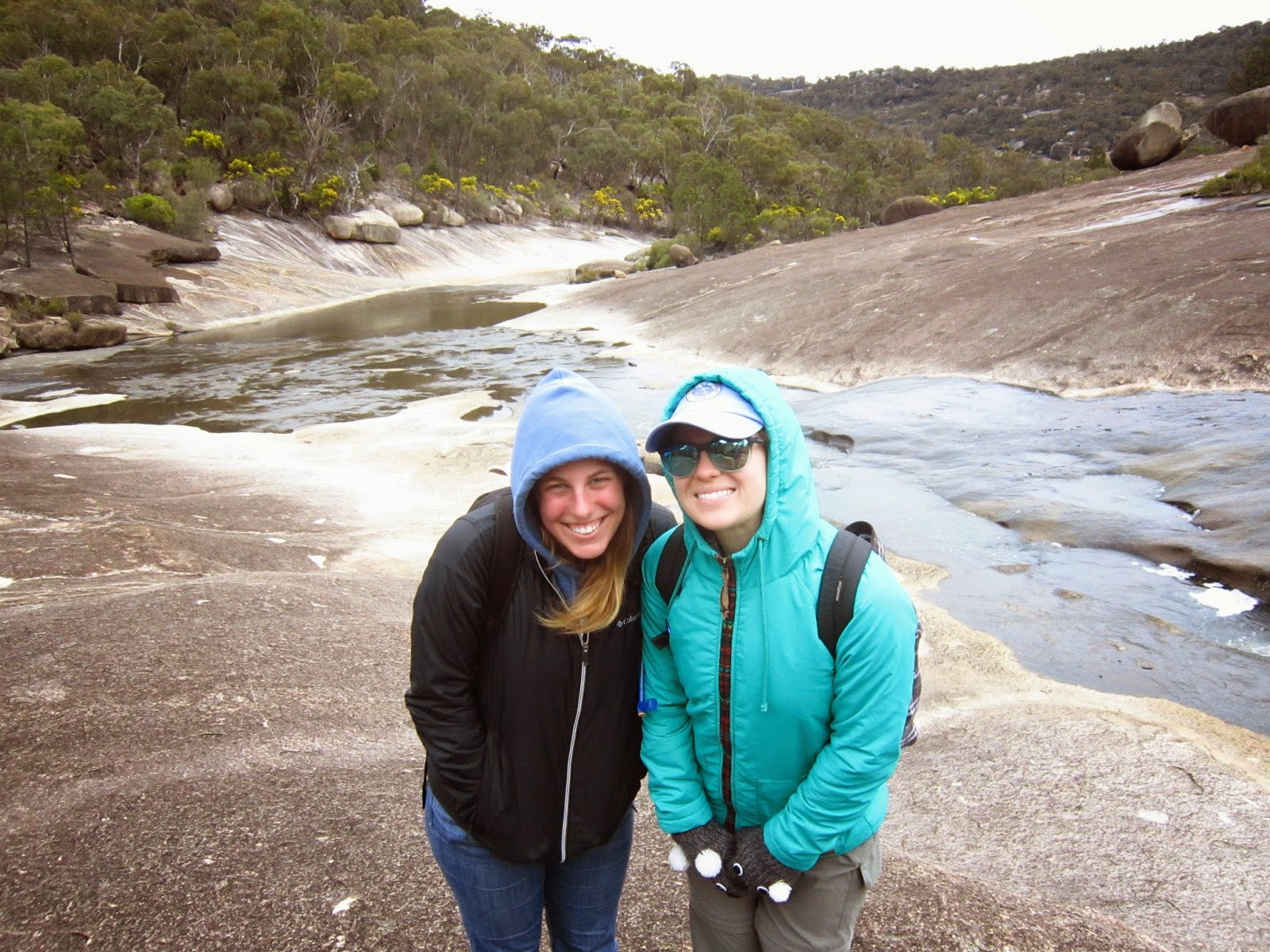 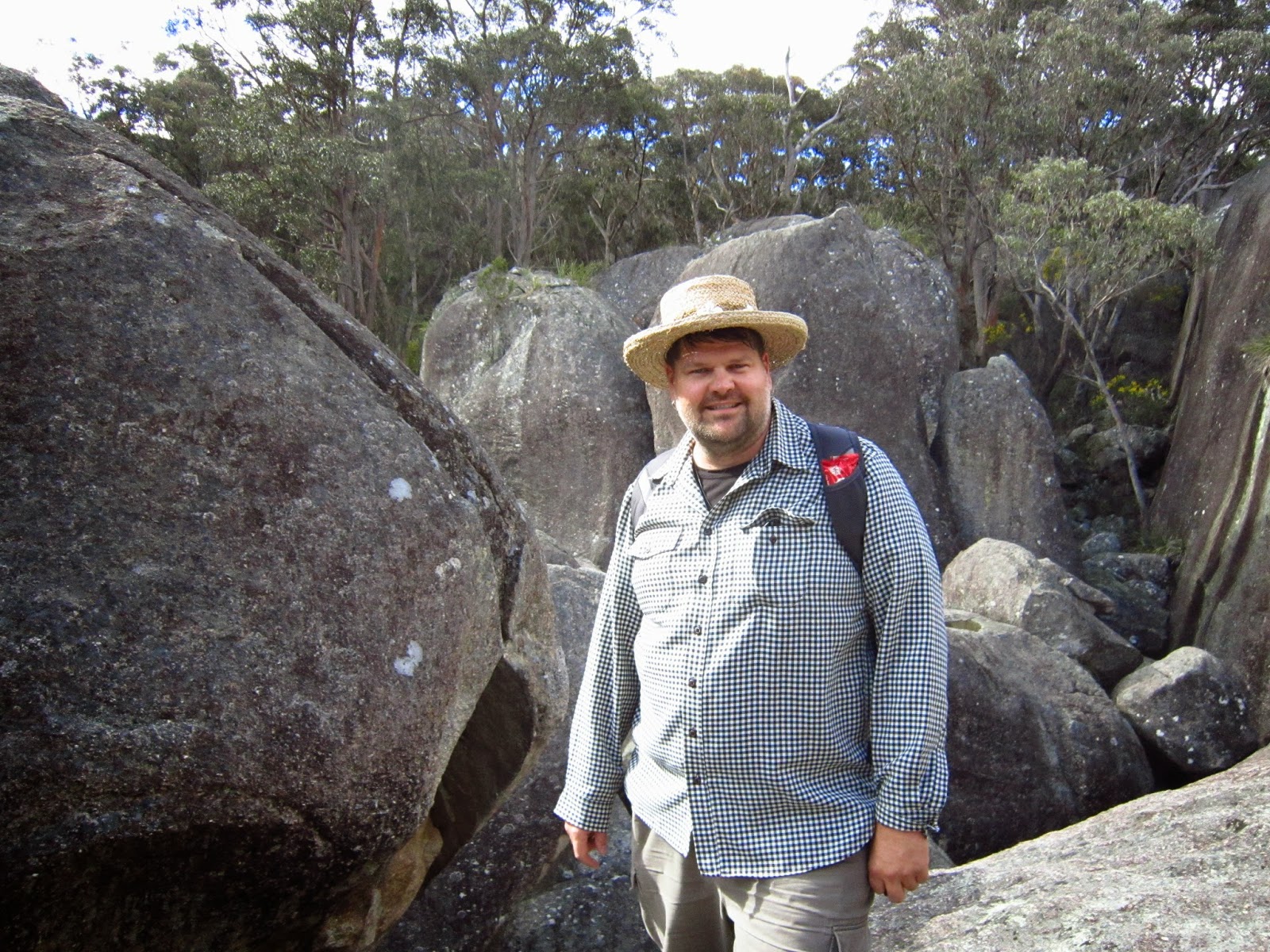 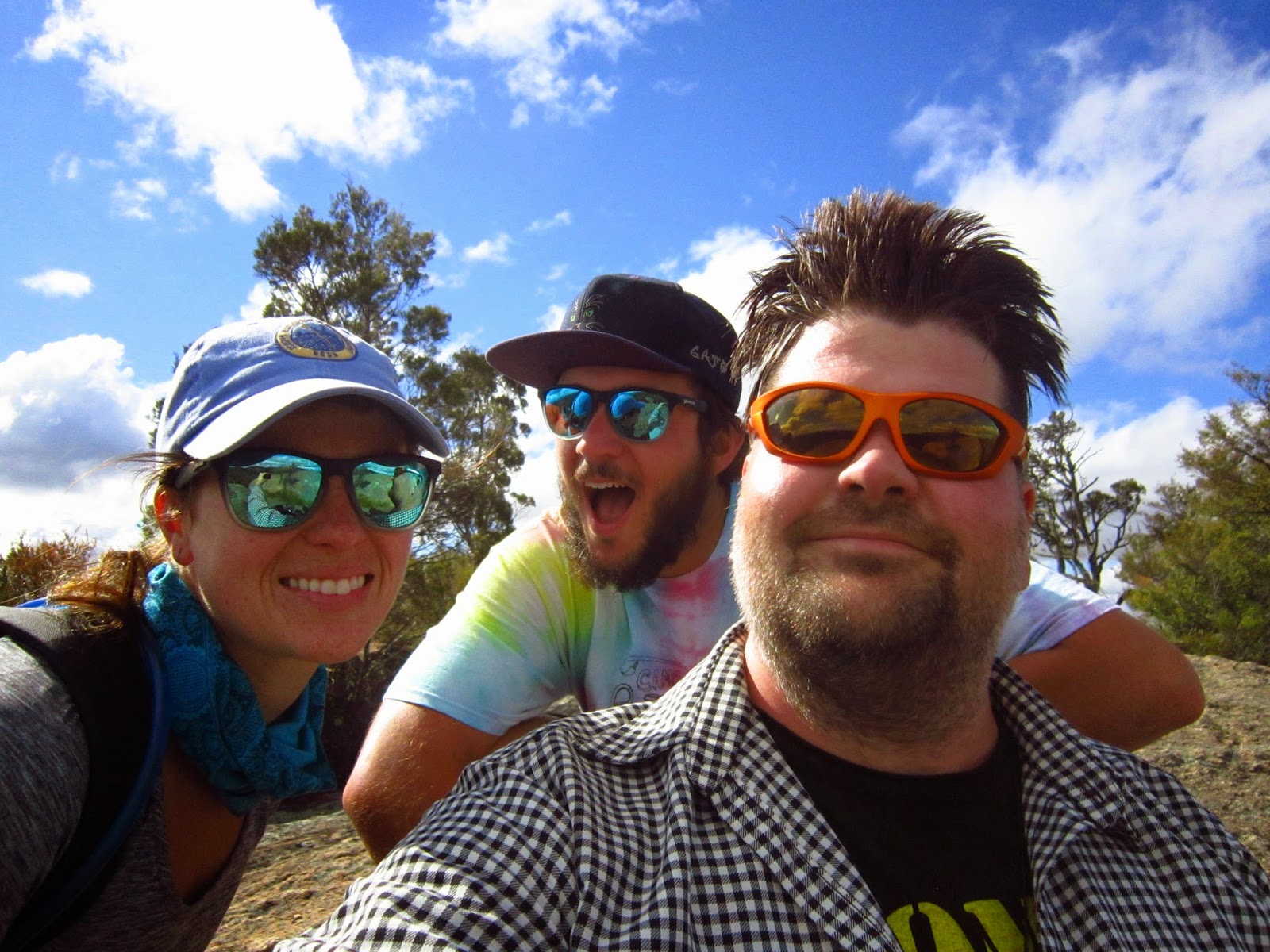 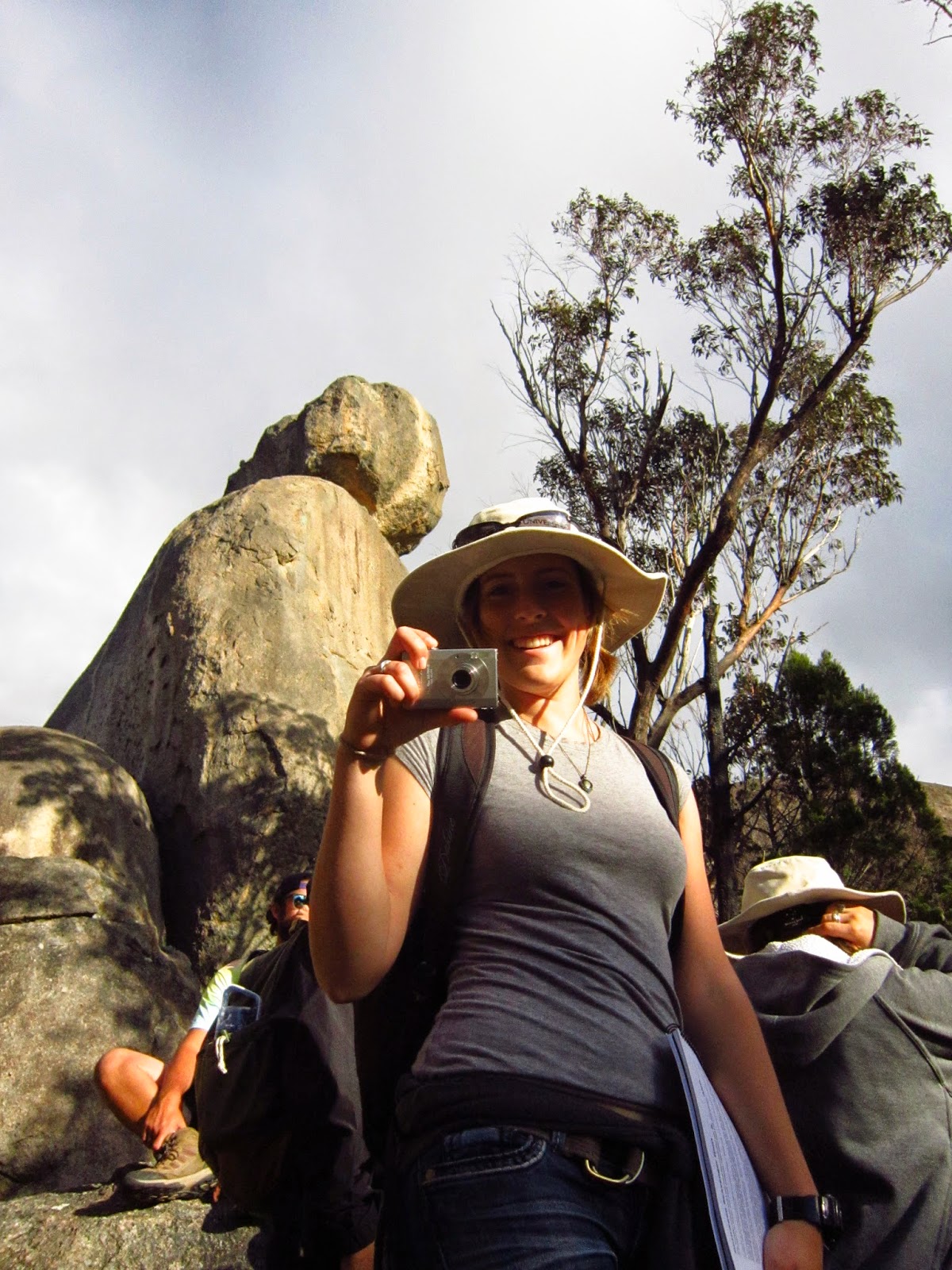 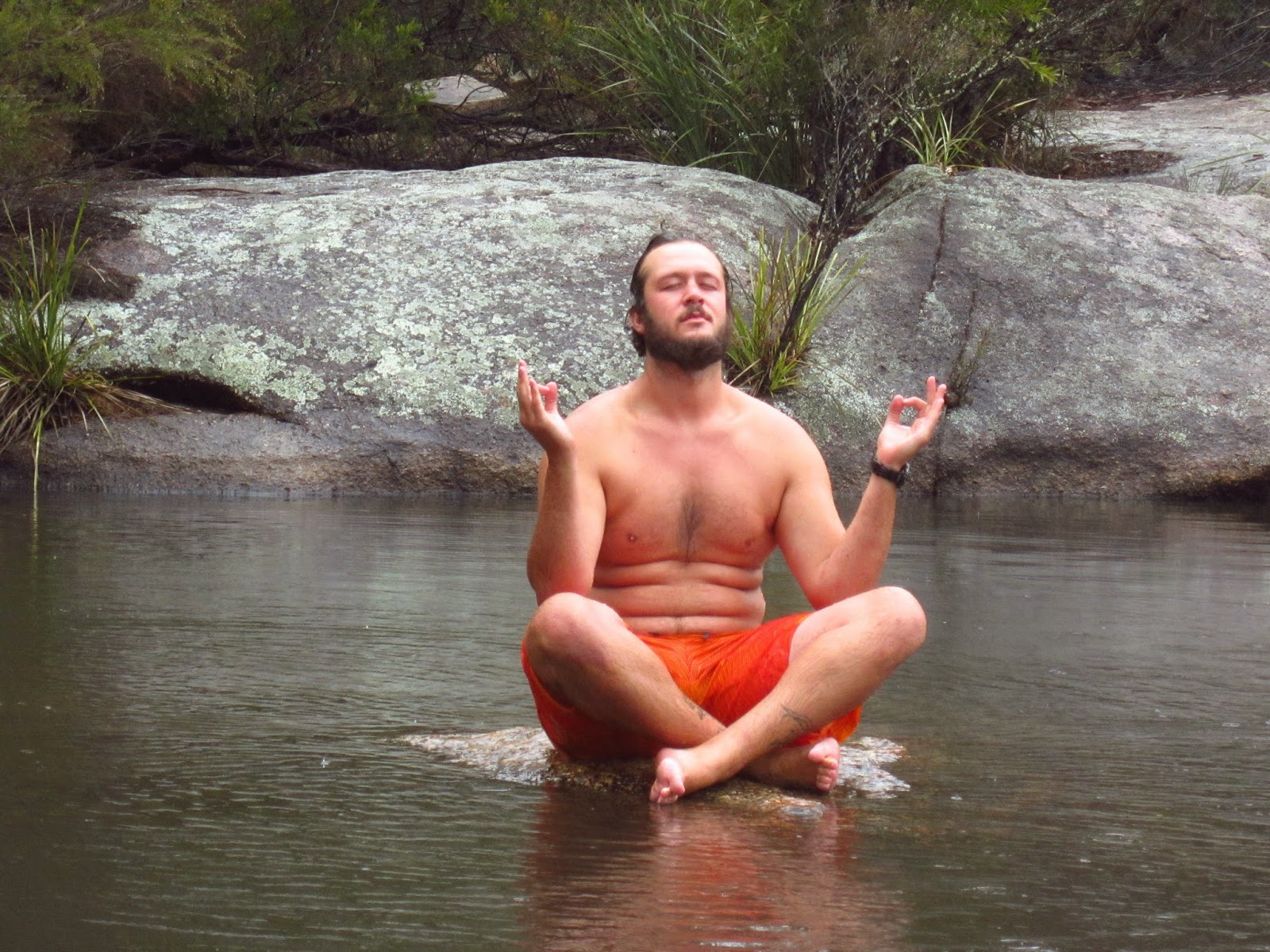 Evenings found us returning to camp, ready to bundle on more layers and have a warming meal produced by Steve and Duncan…two amazing guys under whom I hope to apprentice some day. They drive busses and tow behind it a trailer that unfolds into a solar powered wonder kitchen. Steve enjoys calling the vegetarians in the group (which for the sake of simplicity includes myself) “bad hunters” but both are quick with a smile. Following dishes, we would all march off to a lecture and then back to camp. Interspersed were a contest to produce the creepiest headlamp photos and a theatrically delivered ghost story by our talented lecturer.

A terrific first field trip with several more to come during our time in the Antipodes.

However, it is nice to be back in Brisbane. Andrew (a UCSD student) and I were keen to arrive at our homestay. Our hostess is a lovely woman named Heather who prepared a lovely rendition of tacos while we unpacked and de-scuzzed ourselves from the time in the bush. A proper bed in a private room is going to feel nice (not that the six to a room accommodation at the backpacker's hotel was abominable) Tomorrow, while the rest of our group attends an Australian rules football tournament, I will take some time to get acquainted with the suburbs and hit up a meeting or two, so I don’t end up one of these: 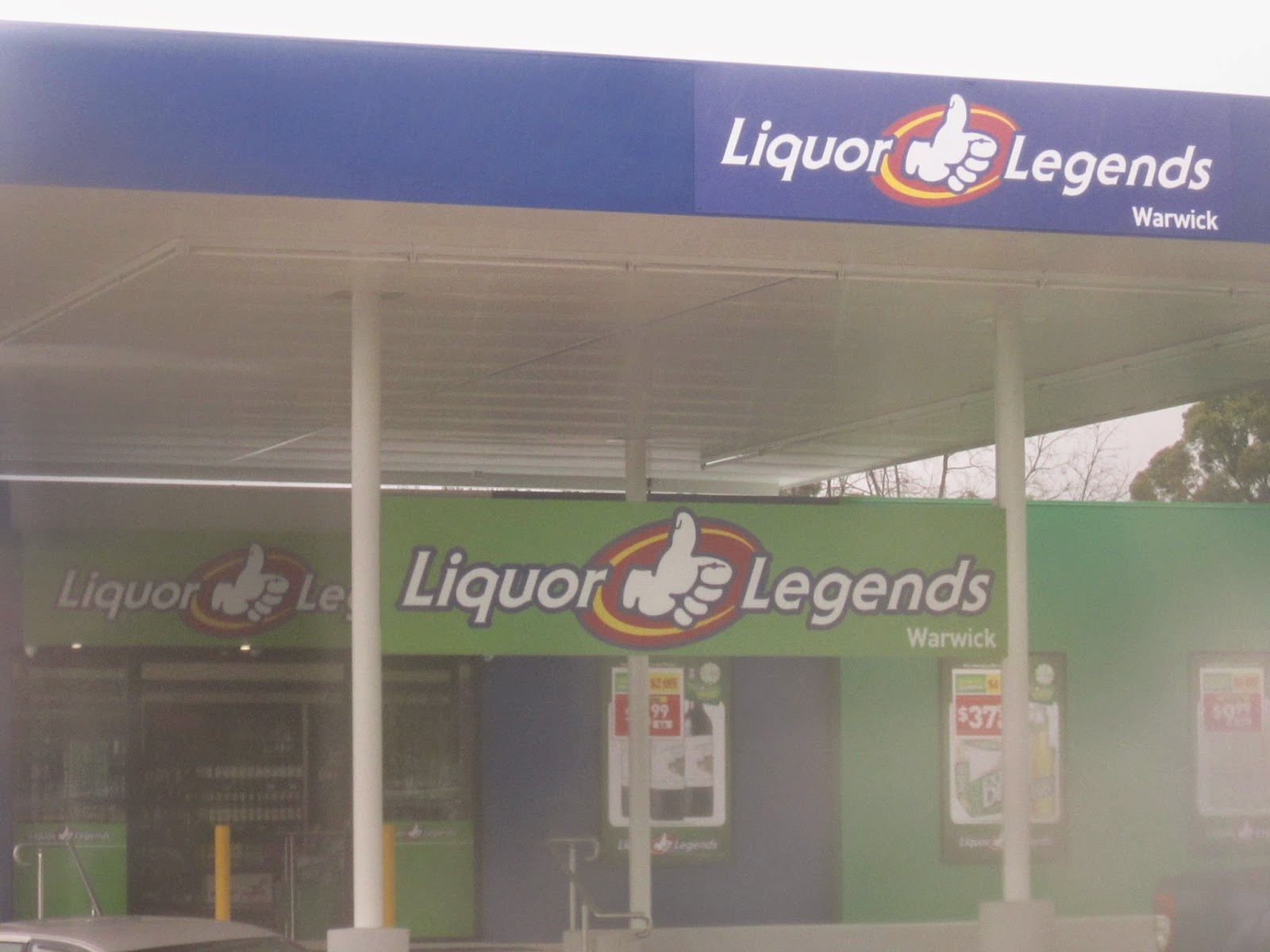